Entropic Communications (NASDAQ: ENTR), a provider of semiconductor solutions for the connected home, made a series of announcements following the close of trading on Monday. The first is that the company's bookings for June weren't experiencing the typical seasonal pickup, leading the company to lower revenue guidance for the second quarter from the prior range of $53 million to $55 million and a loss of between $0.10 and $0.12 per share to $50 million $51 million and a loss of $0.13 per share. Entropic also announced a layoff-heavy restructuring that should help the company reach profitability more quickly.

R&D takes the brunt of the workforce cut
Entropic had about 650 employees as of Monday's announcement. However, the restructuring will involve laying off over 150 employees, more than over 23% of the workforce. Management indicated that three-quarters of the layoffs will be research and development related, leaving a quarter from the various selling, general, and administrative expenses. This restructuring will also involve consolidation of the company's offices, as well as about $5 million in charges, 75% of which are expected to be cash charges. The total expected operating expense savings from the deal should add up to $24 million per year.

While trimming the fat is helpful in trying to reach operational goals, the principal concern here is that most of the cuts are coming from R&D -- the lifeblood of any semiconductor company. On top of that, management has indicated that it isn't canceling any programs (though its Ultra-HD programs will be pushed out), so the company's remaining workforce will need to do more with less. Management noted in an afternoon conference call that the company will focus more on larger, tier-1 customers. This helps support the lower operating expense run rate, but could lead to a long-term customer concentration problem.

Finally, management noted on the call that because of a fundamental shift in Entropic's R&D structure to more reusable IP blocks, engineering teams will be able to spin more derivatives based on a common set of core IP much more quickly than in prior generations, improving efficiency. Many semiconductor companies are signaling similar shifts, so it'll be interesting to see if this actually ends up yielding the results that management expects.

The elephant in the room: Broadcom
By far the largest player in the connected home and set-top box market is chipmaker Broadcom (NASDAQ: BRCM), which has more revenue than all of its major competitors in this space combined. 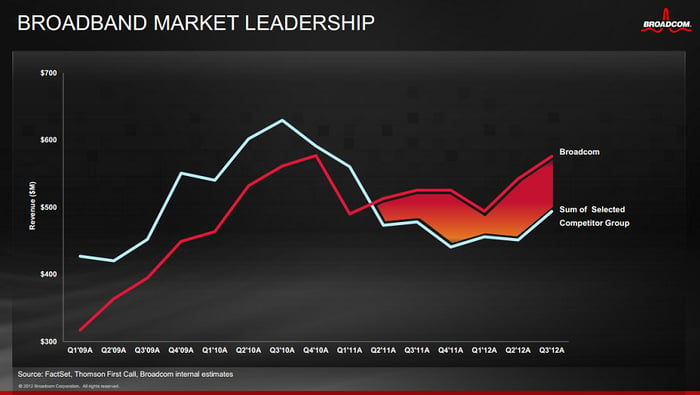 With Broadcom already firmly in the lead in this market, and with the company recently signaling that with the divestiture of its cellular business it will be able to invest more in its broadband (as well as infrastructure and networking) group, the competitive situation isn't going to get any easier. It will be important to monitor Entropic's continued ability to launch competitive products on time and on target in light of the big R&D slash.

Profitability appears just around the corner
At a $60 million per quarter breakeven run rate, the company doesn't exactly depend on huge growth to reach profitability. As outlined in my May 22 piece on Entropic Communications, the company should enjoy a nice revenue spike beginning in the fourth quarter of this year and becoming material throughout the course of 2015 as a result of wins in Comcast's (NASDAQ:CMCSA) X1 and X2 set-top boxes. Furthermore, the company expects its next-generation digital-channel stacking switches to show up in mid-2015 and to ramp up materially throughout 2016.

With revenue only off breakeven by about $10 million per quarter, the odds of the company becoming nicely profitable in 2015 have just gone up significantly. In the near term, this development should offset this quarter's miss, and the stock should trend upward in the coming months. While a painful move, this restructuring should improve sentiment around the company's near-to-medium-term prospects.

Foolish takeaway
Cutting R&D spending is never pleasant, but given the current revenue profile of the business, this was probably the best move that management had available. That said, after multiple quarters of disappointments, the company really can't afford to keep falling flat on its face. With no more excuses left, Entropic needs to deliver solid business performance. The third-quarter guidance that should accompany the full second-quarter earnings release probably won't be anything to write home about (management indicated on the restructuring call that it expected the third quarter to be flat to slightly up), but investors will eagerly await the fourth-quarter guide given at the third-quarter earnings release.