The Dow Jones Industrial Average (DJINDICES:^DJI) has been America's most-watched market index for decades, despite -- or perhaps because -- of its narrow focus on a mere 30 stocks. Where other indices might track 500, or 2,000, or even 5,000 different stocks, the Dow's steady focus on 30 business bellwethers has made it both easier to understand and easier to dismiss as a relic of simpler times. But as long as the Dow remains front and center in every day-to-day market analysis, it and its component companies will remain the most important barometers of American markets.

That's why it's important to understand not only the Dow, but its components as well. What do they do? What do they represent on the Dow, and why do they matter to the American economy? Where have they come from and where might they head in the future? Today we'll dig into the details of Cisco Systems (NASDAQ:CSCO) to find answers to these questions and more, so that we can understand not just what moves the Dow, but why.

Cisco at a glance

Cisco is the youngest Dow component, as it's technically a millennial (it won't turn 30 until this December), but it's also one of the fastest-growing. It was born at legendary tech incubator Stanford University, where founders Sandy Lerner and Len Bosack worked on a "Blue Box" that led directly to the creation of the first commercial routers. Routers, which direct traffic all about the Internet, are so important to the Web's effective operation that Cisco's pioneering commercialization turned it into the stock of the dot-com era. From its IPO in 1990 to its peak in early 2000 -- by which point it had actually surpassed Microsoft as the world's most valuable public company -- Cisco's shares gained over 100,000%.

The company itself also grew at a phenomenal rate, from a $14 million net income in 1990 to earnings of $2 billion in 1999. While Cisco's share price has never recovered to the inflated values of the dot-com era, its fundamentals have continued to improve at an impressive rate -- the company's most recent trailing 12-month profit of $7.9 billion was nearly four times as large as the bottom line in its 1999 fiscal year. Cisco owns nearly half of the global router market and over 60% of the Ethernet switch market. The company has also made a concerted push into blade servers, growing to own roughly a quarter of that segment from a negligible presence only five years ago.

Cisco by the numbers 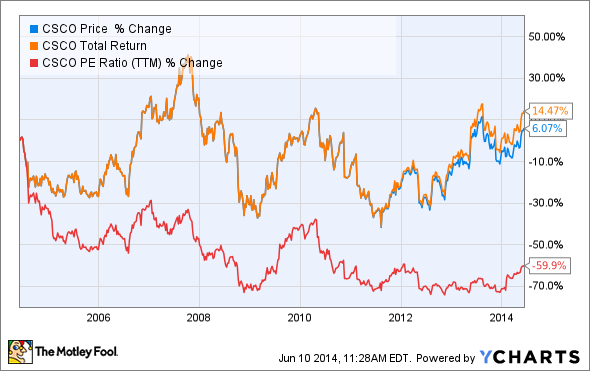 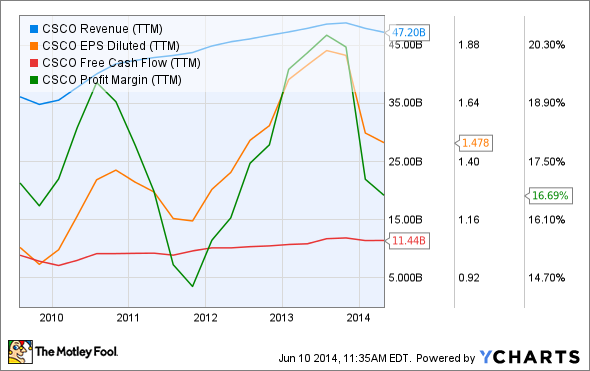 Cisco's growth has slowed down from the blistering pace it once set during the dot-com era, and even from its pre-financial crisis levels. However, the company has been working hard to diversify its product and service offerings away from networking hardware, which are growing increasingly commoditized as innovative competitors roll out both their own hardware and more software-defined networking offerings. Cisco CEO John Chambers has said that both acquisitions and growth in software sales are key to the company's long-term plans, and in 2012 he promised to double Cisco's annual software revenue (then $6 billion) within five years.

Cisco is also betting heavily on the Internet of Things, which makes perfect sense for a company that is already responsible for directing so much of the Internet's traffic. Cisco believes the Internet of Things can generate $19 trillion in new revenue -- $14.4 trillion for private companies and the rest for the public sector -- by 2020, and Chambers himself has boasted that the sector will be "five to 10 times more impactful than the whole Internet has been today." Wall Street's analysts have a more subdued outlook -- on average, they expect Cisco to improve its bottom line by a mere 7.7% annually for the next five years, compared to double-digit growth rates for technology as a whole and 18.4% annually for networking specialists for the next five years.