With student loans now officially in the trillions, the Consumer Financial Protection Bureau believes these rising levels of debt could have a disastrous impact on the American economy. Last week, Rohit Chopra, the Student Loan Ombudsman for the CFPB, spoke to the Senate Committee on the Budget about what the rising level of debt from student loans is doing to our economy.

This, of course, is a topic that has garnered much attention of late. In his State of the Union address, President Obama said, "I want to work with Congress to see how we can help even more Americans who feel trapped by student loan debt."

With student loan debt now surpassing credit card debt, former Treasury Secretary Larry Summers noted that millions are slower to buy new homes and form families, and the reason driving this was the "overarching life-shaping imperative of managing student debts for too many young people." Nobel Prize recipient Joseph Stiglitz agreed with Summers and said: "We have really an educational crisis in our country. It's affecting our potential future growth and it's affecting our economic performance right now."

When you consider that total student loans have grown more than 4.5 times since 2003, it should come as no surprise that many are worried about the impact this debt is having on the American economy: 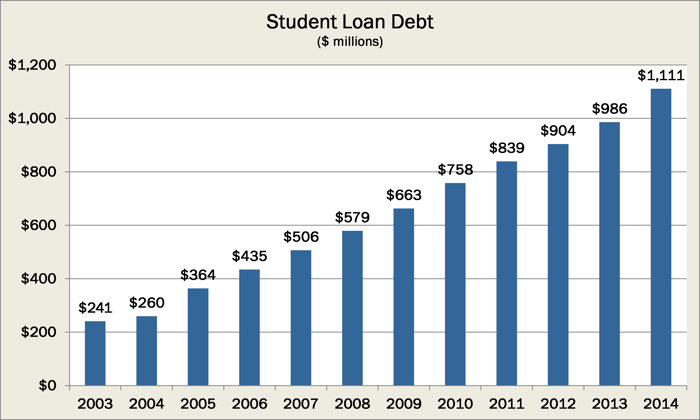 The disastrous effects
Chopra's prepared remarks in Washington focused on how the rising levels of student debt -- which is owed by more than 40 million Americans -- has had wide-ranging impacts on the American economy. And this rising debt -- like the housing collapse that spurred the Great Recession five years ago -- could have a "domino effect" on the entire economy.

On the subject of homeownership, Chopra cited studies which have revealed that the growing level of student debt has resulted in fewer younger Americans feeling comfortable buying homes. The National Association of Realtors found that 49% of Americans said student loan debt was a "huge obstacle" to homeownership. Chopra himself said, "Professionals on the front line of the housing industry -- from real estate agents to builders to mortgage bankers -- have all described the challenges posed by student debt to homeownership."

Fewer buyers hurts those looking to sell their homes. Plus, the impact of student debt extends beyond buyers and sellers; it also extends to those who are looking to rent, but cannot because of their debt levels.

But it extends beyond housing. Increased debt means less opportunity to save for retirement, which one study found could result in a loss of almost $135,000 in retirement savings. With higher debt levels, fewer doctors and teachers are willing to work in rural or specialty fields if it results in less pay. And high levels of debt make people less inclined and able to innovate by starting new small businesses.

With all of that in mind, it's no wonder Chopra reminded us, "Secretary of the Treasury Jacob Lew remarked that student debt is 'hampering our economy' across multiple sectors of society."

The key takeaways
All this information isn't to suggest that college is no longer worth it -- just the opposite is true -- but it sheds light on the reality that there are true costs and benefits associated with attending college and amassing debt. It's likely that more needs to be done to communicate what the true costs are in attending certain schools versus others, or choosing one degree over another.

It's also encouraging to know the CFPB is asking for greater transparency surrounding student loan debt held by certain institutions. And the thought of the CFPB pushing for the ability to refinance and restructure student loans -- like countless other borrowings -- could have great success.

There is a true financial impact when attending college. We have to hope that more will be done to ensure that the benefit always outweighs the cost.