Financials are leading the Dow Jones Industrial Average (DJINDICES:^DJI) today following some surprising economic reports. The housing market surprised to the downside, while inflation came in at double analyst's expectations. As of 1:20 p.m. EDT the Dow was up a meager 12 points to 16,793. The S&P 500 (SNPINDEX:^GSPC) was up three points to 1,941. 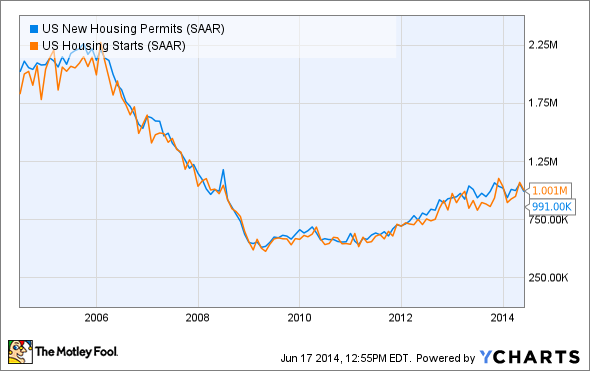 Since climbing near the 1 million level in 2013, housing growth has cooled off, hurt by higher mortgage rates and prices.

The big surprise today was inflation data from the Consumer Price Index. The CPI rose 0.4% in May from 0.3% in April, outpacing analyst expectations of 0.2%. On a 12-month basis, the CPI is up 2.1%, up from 2% last month. The jump in inflation was driven mainly by energy prices, which rose 0.9%. This was the result of higher oil prices but particularly higher electricity prices in California, which are changed once a year in May. Food prices also rose, jumping 0.5%.

The Federal Reserve has been targeting inflation of 2% to 2.5%, and inflation has remained well below its target. The Fed meets today and tomorrow to decide the course of its zero-interest-rate policy, as well as its long-term asset purchases, which the Fed is using to keep interest rates low. With inflation higher than expected, the Fed may sooner raise its short-term interest rates from zero, which should have the effect of raising rates across the board -- a positive for banks that make their living bringing in short-term deposits and lending at higher interest rates.

As such, today's market-leading sector is financials, and today's Dow Jones' leader is Goldman Sachs (NYSE:GS), up 1.6%. Up with the rest of the financial sector for the aforementioned reasons, Goldman Sachs is also benefiting from this week's rising volatility in stocks, bonds, and commodities. While other big banks have been selling or spinning off their trading divisions, Goldman has stuck to its knitting and said it will hold on to its trading units through this challenging time in the markets. If volatility continues to rise as the Fed chugs toward ending its quantitative easing programs, Goldman will be sure to benefit.