However, it wasn't always that way. 50 years ago, when Warren Buffett first became involved with Berkshire Hathaway, the company was a major textile firm. This incarnation of Berkshire Hathaway may have been the worst acquisition of Buffett's career.

The problem with Berkshire Hathaway was not bad management -- it was just a tough business. There are many similarities between Berkshire then and the airlines today. Investors have bid up the stock prices of big airlines like American Airlines (NASDAQ:AAL) and United Continental (NASDAQ:UAL) based on rosy assumptions about their long-term profitability. They may soon learn the tough lesson Buffett learned at Berkshire Hathaway.

The hard thing about the textile business
Buffett's comment on the pitfalls of capital-intensive businesses reflected 15 years of experience trying to wring adequate profits out of Berkshire Hathaway. The root of the problem was that Berkshire Hathaway's product was a commodity -- it was no different than the products being produced by competitors.

As a result, Berkshire Hathaway had to match the prices of its competitors to sell its products. The capital-intensive nature of the textile industry compounded this problem. Once major capital investments have occurred (e.g. building or retooling a factory), the depreciation of those assets represents a fixed cost.

When the textile industry had too much capacity, Berkshire and its competitors were faced with a Hobson's choice: they could either keep their factories running or not. Either way, they were in a bad situation. If they kept the plants running, the oversupply would continue, forcing them to cut prices to clear excess inventory. If they idled the plants, they would lose money due to their high fixed costs.

Buffett's insight was that it is virtually impossible to avoid this issue in a capital-intensive commodity business. When times are good, companies will invest in fixed assets to meet the growing demand. However, that will leave them with overcapacity as soon as demand starts to drop off. Only during fleeting moments of "shortage" can such businesses earn high returns on invested capital.

Airlines are like textile mills
Despite identifying the problem with capital-intensive commodity businesses in the late 1970s, Warren Buffett made a big bet on USAir 10 years later. Shortly after Buffett invested in USAir, the airline industry ran into trouble due to overcapacity and irrational pricing by some carriers.

Buffett soon recognized that the airline industry displayed the same key characteristics as the textile industry: it was capital-intensive due to the high cost of airplanes, and it was a commodity-type business, as most travelers buy primarily based on price. He therefore described his investment in USAir as an "unforced error" -- even though it eventually turned a profit.

Beware airline rocket stocks
Investors don't necessarily need to avoid all airline stocks, despite Buffett's warnings. (I personally own several airline stocks.) However, Buffett's insights about this type of business show that investors should be particularly cautious about airlines.

Recently, investors have abandoned this caution. For example, United Continental and American Airlines have both posted big stock price gains in the past year -- even though in United's case, earnings estimates have been falling. 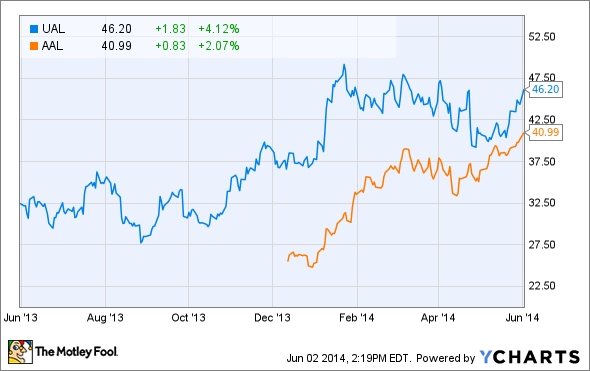 However, United and American are investing heavily in new capital -- particularly new planes. As a result, free cash flow is essentially nil at both companies today. This means that investors are really betting on these airlines' ability to maintain or even improve earnings over the next 10-20 years.

In other words, airline investors appear to be ignoring Warren Buffett's wisdom. Buffett would argue that airlines are just benefiting from a temporary period of shortage right now. Capital is starting to pile into the industry, fueling growth among smaller U.S. airlines. There will be a lot more competition in the airline industry 5-10 years down the road than there is today -- leading to lower industry profit margins.

Today, airline bulls think that "capacity discipline" has helped major airlines like American and United Continental become good long-term investments, despite being in a capital-intensive commodity business. In reality, capacity discipline has just created a temporary shortage of capacity. In the long run, new competitors will make up the difference, leading to lower margins for everybody.