Think the growing student loan debt is going to bring down the American economy? One study shows you may want to think again.

The rising debt
With student debt now topping $1 trillion, much has been made about the possible crisis that could result from the ballooning levels of debt. After all, it was in the State of the Union address when President Obama said:

We're offering millions the opportunity to cap their monthly student loan payments to 10% of their income, and I want to work with Congress to see how we can help even more Americans who feel trapped by student loan debt.

And just a few weeks ago, the White House confirmed that Obama had brought the extension of the "Pay As You Earn" plan to allow more borrowers the ability to cap their monthly student loan payments based on how much they earn.

This came less than two weeks after the Student Loan Ombudsman for the Consumer Financial Protection Bureau told the senate the $1.2 trillion in in student debt "can have repercussions that threaten the economic security of young Americans and broader economic growth."

All of this is to say that the rising levels of debt thanks to the increasing costs of college have led many -- including the president -- to both think and proclaim the American economy is poised for true economic turmoil.

But a recent study revealed that all this media coverage and news from Washington may be masking the truth. Put simply, it turns out the student loan crisis may not be a crisis at all.

The reality
The non-profit, Washington-based Brookings Institute -- which has been deemed both liberal and conservative and many other things in between -- recently released a study that asked the question: Is a Student Loan Crisis on the Horizon?

The study found, after pouring through two decades worth of data (emphasis added):

Typical borrowers are no worse off now than they were a generation ago, and [the data] also suggests that the borrowers struggling with high debt loads frequently featured in media coverage may not be part of a new or growing phenomenon. The percentage of borrowers with high payment-to-income ratios has not increased over the last 20 years -- if anything, it has declined.

We are certainly not arguing that the state of the American economy and the higher education system is just great. But we do think that the data undermines the prevailing sky-is-falling-type narrative around student debt.

And the reality is that while the total debt has risen sharply over the past two decades, debt as a percentage of income hasn't budged whatsoever: 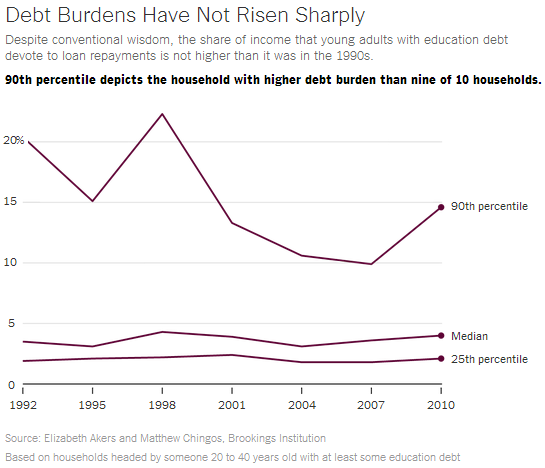 Graph from The New York Times.

Remember that this also follows news from College Board showing that the increase in the true cost of college, known as net tuition -- which accounts for financial aid -- has risen by just 2.2% a year at public schools since 1991. This total gain of just 66% is much lower than the published tuition gains of 160%, which is what grabs headlines. And that growth stands at an unbelievably low 11% from 1991 to 2014 at private schools:

And while many may want Americans to question whether college is even worth it, the Pew Research Center revealed earlier this year that those with a college diploma can now expect to earn 60% more than those with a high school degree. Yet nearly 40 years ago, that gap stood at just 24%, meaning college is more valuable now than ever before.

The key takeaway
The study from the Brookings Institution did show that the student debt held by those who didn't obtain a degree has skyrocketed over the past two decades, and the average amount per person has more than doubled. Yet this shows that the problem is probably the result of issues related to the ability of both individuals and colleges to ensure that the right programs are being selected.

Undeniably, there are instances of those facing unbelievable levels of crippling student debt, which is a difficult and troubling reality. The study itself says these instances highlight "the need for robust social safety nets such as income-based repayment and payment deferral for financial hardship, programs which exist but are in need of simplification and improvement." I agree that more needs to be done.

But we must add the findings of the study in with the many others showing that the benefits of college far outweigh the costs, and while the escalating levels of debt are scary, they may in fact be a good thing for the American economy.