Iraq is crumbling, and that could have major implications for the rest of the world's oil supply. While record oil production in the United States will soften any domestic blow from potential disruptions on the supply side, it won't alleviate them. And, since oil is a globally traded commodity, U.S. production won't do much on the cost side. Iraq's current travails, however, make Canada's oil sands and TransCanada's (NYSE:TRP) Keystone pipeline that much more interesting.

Where the problem lies
TransCanada's Keystone pipeline has been mired in government red tape for years. Every time it looks like there's going to be an answer, the United States finds another way to delay a yes/no call. In fact, TransCanada has actually completed the lower portion of the proposed pipeline, carrying oil from Cushing, Okla. and the Gulf Coast. That will help relieve a supply glut that's kept Cushing, Okla. overflowing with oil.

That, however, was the easy part. The problem that TransCanada is dealing with is getting the portion of the pipeline that crosses over the Canada/U.S. border approved. Because it is crossing that boundary, the pipeline needs extra approvals -- which have yet to materialize. Part of the pushback is that the pipeline will carry oil mined from the Canadian oil sands.

And that's a big issue for environmentalists because getting oil out of oil sands is a dirty, expensive, and energy-intensive process. However, Iraq is the second-largest OPEC oil exporter after Saudi Arabia. According to the U.S. Energy Information Administration:

Iraq was the sixth largest net exporter of petroleum liquids in the world in 2012, with the majority of its oil exports going to the United States and to refineries in Asia.

So turmoil in Iraq could lead to oil shortages in the United States. TransCanada's Keystone pipeline would help solve that. And senators are pushing an agenda to get it approved. Acting while the iron is hot is vital, which explains why business and government officials are also trying to leverage Russia's actions to get natural gas export approvals.

Keep an eye on the Keystone pipeline issue; it's set to flare up again. Only this time, there's even more evidence backing the energy independence issue that's long been bandied about.

What about the sands?
What's interesting about the troubles in Iraq, however, is that they bring to the fore energy security for more than just the United States. That could make a stable and reliable nation like Canada a bigger player on the world's energy stage, particularly since it has ample supplies of oil trapped in the oil sands.

And if Iraq concerns help keep the price of oil high, oil sands are increasingly viable. According to industry suppliers, it costs between $50 and $80 a barrel to mine oil sands oil. Iraq violence has kept prices well above $100 a barrel. For a hedged bet on the oil sands, you should look at diversified miner Teck Resources (NYSE:TECK). 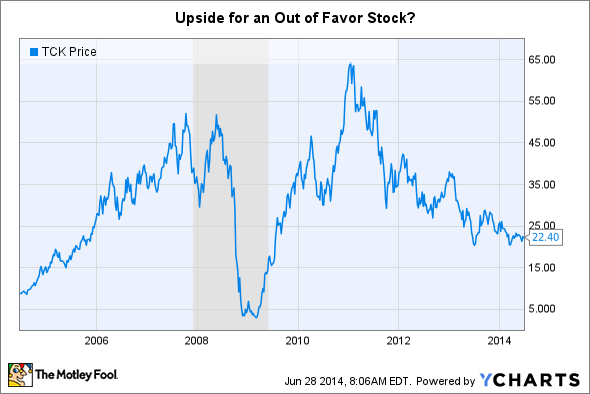 Teck Resources' big businesses are metallurgical coal, copper, and zinc. However, that's the picture today. In 2018, when its joint venture in the oil sands starts producing oil, that picture will get a fourth dimension. Teck Resources owns 20% of the mining operations, which means it's in line to get 36,000 barrels per day, or 13 million barrels per year, of bitumen. The project should start producing oil in late 2017.

Using $100 a barrel just to make things simple, 13 million barrels a year is $1.3 billion in revenue. Teck Resources had revenue of $9.3 billion last year, so the oil business would be a sizable contributor though would still lag behind its other businesses size wise. For now, anyway. If the oil sands work out well, Teck Resources could easily expand its presence.

Which one?
TransCanada would like to get the upper portion of the Keystone pipeline done, but it doesn't need it to be a profitable and growing business. Iraq violence may help, but it still could fall short of tipping the scales and getting Canadian oil sands oil flowing south. However, Teck Resources is already working on its oil sands project, and unless oil prices crater, which Iraq suggests won't happen, it will benefit no matter what happens with Keystone.