Now that we've reached the halfway point of the year, I thought it would be a good time to take a look back and see which stocks have shined brightest so far in 2014.

It's been a good year for the market overall, as the S&P 500 is up 5.7% year to date. The Financial Sector SPDR (NYSEMKT: XLF) is up only 3.4% in the first half of 2014 after rising a whopping 35.5% in 2013. But just because the sector has lagged the overall market this year doesn't mean there aren't bright spots.

HDFC Bank (NYSE:HDB), ICICI Bank (NYSE:IBN), and Essex Property Trust, (NYSE:ESS) have lead the charge among large cap financials in the first half of 2014.

All aboard the Sensex train!
The top two best-performing large-cap financial stocks in 2014, HDFC Bank and ICICI Bank, are both Indian banks. And when you look at the type of year the Indian stock market is having, it's no wonder. India's main stock exchange, the Mumbai Sensex, is up over 18% in 2014. 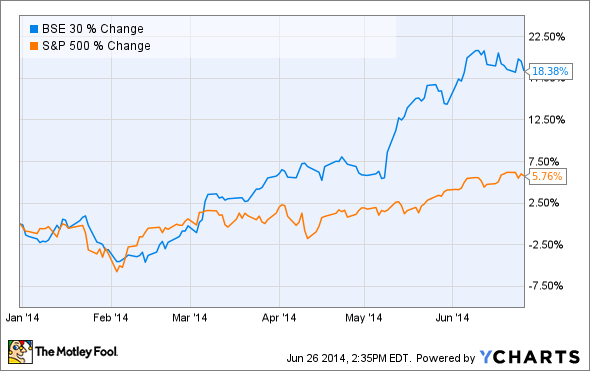 Although the growth rate of the Indian economy has slowed from 10.5% in 2010 to 4.8% in 2013, India's GDP growth rate remains twice as high as the U.S. growth rate. However, strong growth such as this comes at a price, and when the time frame in extended to 10 years, it's easy to see that the Sensex is much more volatile and unstable than the U.S. market. 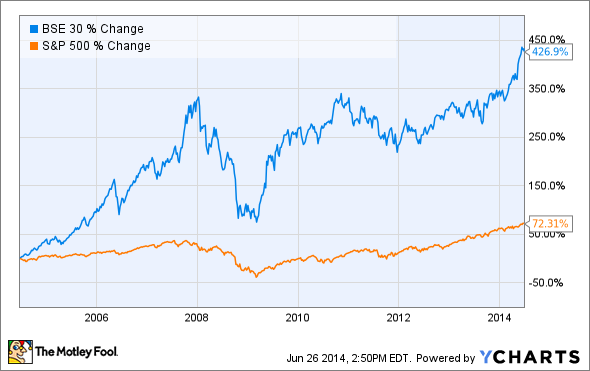 But what is it about 2014 that has investors so excited about India? The major factor driving markets higher this year seems to have more to do with politics than economics.

In Modi we trust
The election of Narendra Modi as India's new prime minister has many investors optimistic about the future. When I recently asked a pro-Modi Indian friend of mine why the country is so excited about the new prime minister, he simply answered, "Modi is good for business."

Modi's reputation as a pro-business leader stems from his past success ushering in a period of economic prosperity in the state of Gujarat during his time as chief minister. As a candidate for prime minister, Modi's platform included pledges to improve India's infrastructure and provide new and better employment opportunities throughout the country. 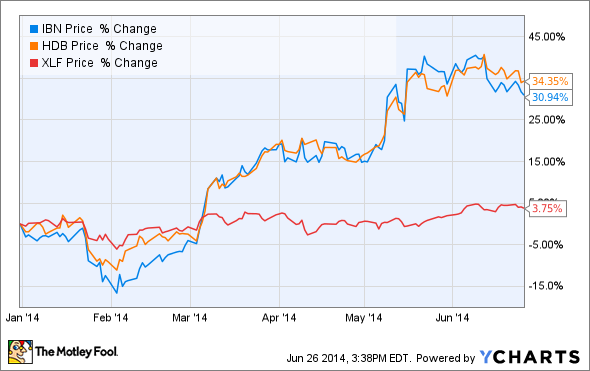 With both stocks already up over 30% year to date, HDFC Bank and ICICI Bank certainly seem to be beneficiaries of the boost that Modi's election provided to the Sensex. However, investors also had plenty of fundamental reasons to buy these stocks in the first half of 2014.

HDFC's return on equity (ROE) is an impressive 16.8%, and it's net interest margin (NIM) is a strong 4.4% despite having a non-performing asset ratio of only 1%.

Team U.S.A. represents!
While India's market boom is certainly impressive, the third best-performing large cap financial stock for the first half of this year is as American as apple pie: apartment real estate investment trust (REIT) Essex Property Trust. Shares of Essex have jumped 28% so far in 2014. 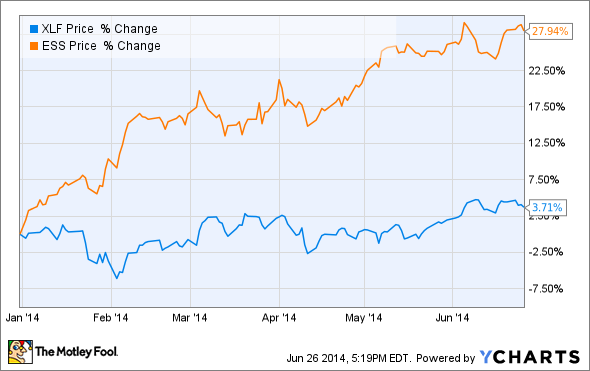 In April, Essex completed a $16 billion merger with BRE Properties. Post-merger Essex has ownership interest in 233 multifamily rental properties and 15 properties in the developmental stage up and down the West Coast.

Essex investors seem to like the company's aggressive expansion, and for good reason. The larger the REIT, the higher the operating margins and the lower the cost of capital when it comes to borrowing for further expansion. In addition, the West Coast rental market is booming. The median home sales price in California is now about $425,000 compared to the national median sales price of $172,000.

Since buying a house at these prices is more than many residents can afford, many West Coasters prefer to rent. Whether it be because of high housing prices, lack of job security, a national shift in attitude about housing, or other factors, the shift from owning to renting is happening nationwide. According to the Bureau of the Census, the national home ownership percentage is currently 65%. This number has been steadily declining since it peaked at around 69% back in 2006, and there is no sign that the trend will change anytime soon.

By buying up rental properties left and right, Essex seems poised to capitalize on the West Coast's demand for rentals, and investors have taken notice so far in 2014.