Whether its new EPA regulations requiring the coal industry cut CO2 emissions by 30% (from 2005 levels) by 2030 or natural gas power plants replacing coal fired ones, the coal industry has faced a brutal couple of years. 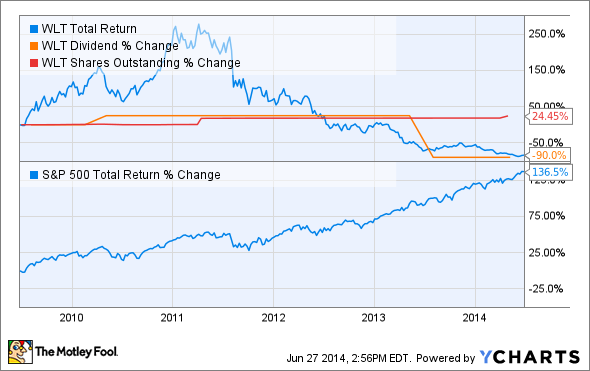 Back in 2011 when metallurgical coal, (used to make steel) was at a high of $350/ton, Walter Energy acquired high-cost Canadian coal miner Western Coal for $3.3 billion.

Today due to soft demand from China and new supply from Australia, metallurgical coal is trading for $120/ton and Walter has had to: cut its dividend 90%, shut down its Canadian mine and attempt to cut administrative expenses by 10% this year.

Walter' Energy's biggest problem is its massive debt load of $2.4 billion, in the form of bonds with interest rates of 8.5%-11%. With a debt/adjusted EBITDA ratio of 24 and the company hemorrhaging cash, Walter will deplete its cash reserves by the end of 2015. This is why the company's bonds are trading for 60% of face value (yielding 20%) and 65% of the company's shares are held by short sellers.

The only way Walter Energy survives is if it either sells more shares and dilutes shareholders as it's been doing at an annual rate of 5.3% since 2006 (see the chart above) or if metallurgical coal prices rebound.

Walter Energy: speculative commodity bet
This is pretty much what investors in Walter Energy are now doing, making a speculative commodity bet that metallurgical coal will rebound before the company's cash runs out. Given its massive short interest and the fact that each $1/ton increase in metallurgical coal price is worth about $10 million in EBITDA, this is a bet that may pay off handsomely. For example, should metallurgical coal rebound to $175/ton, Walter Energy's EBITDA would soar to $715 million, its debt/EBITDA would fall to 3.36, and it could easily service its debts. This would likely send the share price soaring several fold in the short-term.

However, here at The Motley Fool we believe in owning high-quality companies with solid management teams and good growth prospects. That is why I don't recommend Walter Energy but rather Alliance Resource Partners (NASDAQ:ARLP) and its general partner Alliance Holdings GP (NASDAQ: AHGP). 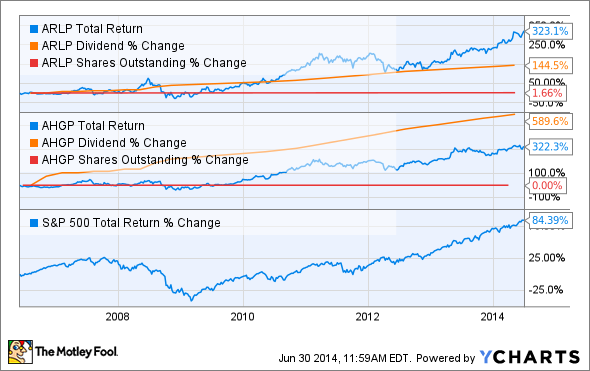 Unlike Walter Energy, which has returned -4.5% annual total returns over the last 15 years (vs the greater market's 8.8%), Alliance Resource Partners and Alliance Holdings have proven to be very good at making long-term income investors rich. For example, Alliance Holdings in the last 10 years has nearly tripled the market (20.6% annual returns vs 7.7%) while Alliance Resource Partners, over the last 17 years has beaten the market by 583% (31.4% annual returns vs 4.6%).

While I don't expect either security to continue with such sky-high returns, there are three reasons I believe Alliance Resources can outperform the market in the long-run and make income investors very rich.

The first reason is because Alliance Resources has some of the best, lowest-cost reserves in America in the form of its 14 Illinois and Appalachia mines.

With coal fired electricity production up 15.1%, overall coal consumption up 12.6%, and utility coal reserves down 28% this year, it seems a bottom has formed in the coal market.

Alliance Resource Partners, which has reported 13 consecutive years of record production and revenues (as well as 24 consecutive quarters of distribution growth) is well poised to continue its impressive winning streak.

Specifically it has three projects: two new mines (Gibson South and an investment in the White Oak mine) and one expansion (Tunnel Ridge longwall), that will result in a 29% increase in coal production by 2016.

What's more, Alliance Resource Partners has proven itself a master at cutting costs, with production costs at Tunnel Ridge dropping 29% this quarter.

The second reason for investing in Alliance Resource Partners is because management has proven itself skilled at protecting the balance sheet and unit holder wealth. Consider this:

With dividend/distribution growth like that long-term investors can expect total returns of about 14.5%-15.9% annually over the next decade.

Foolish bottom line
Walter Energy represents the kind of short-term, speculative coal play I'd recommend investors avoid. Alliance Resource Partners on the other hand is the epitome of a Foolish investment. It represents a best of breed company with impeccable management, a rock-solid balance sheet, and a Volvo-safe dividend/distribution set to grow strongly over the next decade.