The Dow Jones Industrial Average (DJINDICES:^DJI) was 0.7% higher in late morning trading, as 26 of its 30 components traded up.

But no Dow stock can match IBM (NYSE:IBM). Big Blue led the blue-chip index by a wide margin, trading 2.6% higher and singlehandedly adding 31 points to the Dow.

Why is IBM rising so fast today?

IBM has a number of potentially market-moving news items on the table. But one item stands out like a sore thumb, and is IBM's most likely propellant on this fine Tuesday.

Market analysis firm Gartner recently published the 2014 version of its security information and event management report, commonly known as the SIEM report. This is where Gartner rates 15 vendors in the field of data security analysis, ranking them on the two axes of ability to execute and completeness of vision.

Guess which security analysis vendor came out on top in both of these rankings? That's right, it's IBM: 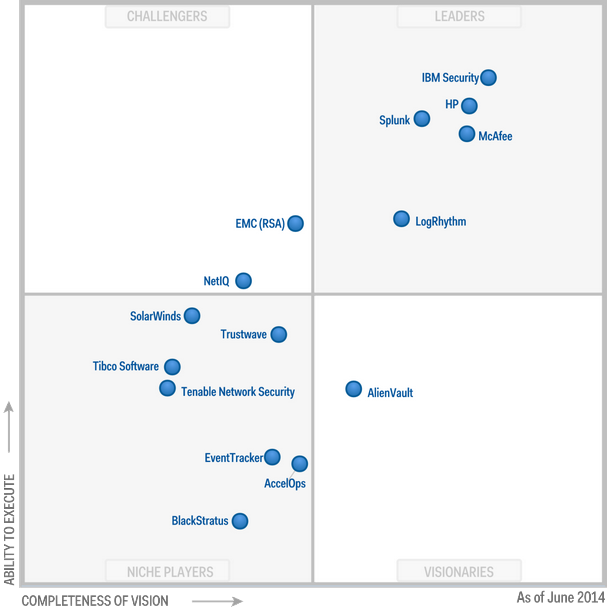 Now, IBM is no stranger to the upper-right corner of this chart, where crisp execution meets a complete tool kit. But last year, Hewlett-Packard (NYSE:HPQ) had IBM beat on the "complete vision" axis. In 2012, IBM trailed HP in terms of execution and was behind Intel (NASDAQ:INTC) subsidiary McAfee on the vision axis.

In short, this is the first time IBM leads the Gartner SIEC rundown in both of the major categories.

People pay attention to the Gartner reports. This rare performance gives IBM a serious bragging and selling point when it makes the rounds for the next big-ticket customer's order of high-quality data security tools.

Comparing this report to the 2013 version, you'll note that HP and Intel/McAfee held on for dear life to their cherished top-right corner of the Magic Quadrant. IBM may rule the roost, but these giants are not far behind. Splunk (NASDAQ:SPLK) improved its completeness of vision score, edging closer to the elite trio at the very top.

And yes, that qualifies as good news for companies not named IBM as well. Splunk jumped as much as 1.3% higher on the news, HP gained 2.1% at most, and even Intel shares took a 0.6% overnight jump. Data security is an interesting hobby for hardware specialist Intel, while the others can branch out with plenty of related up-sell software solutions when customers want to talk about security.

IBM still has work to do if it wants to further impress Gartner's analysts. IBM's QRadar SIEM package provides a full-featured threat analysis platform, but the workflow could be more detailed and the support for complex network designs is a little clunky. Nobody's perfect.

This is an important win for IBM as CEO Ginni Rometty steers the company deeper into software and services at the expense of hardware sales. Big Blue is still reaching for that perfect top-right score in other important Gartner rankings, like business intelligence and analytics or enterprise architecture tools. In this spring's cloud infrastructure as a service report, IBM moved up from dead last on both axes to a solid middle-of-the-pack ranking.

Rometty has IBM moving in the right direction. The next step? Capitalize on these commendable Gartner rankings, and turn these scores into real sales.