The PC is far from dead, and so is Intel's (NASDAQ:INTC) plan to spend billions on buying its own stock. The tech giant's shares jumped this week after it posted strong quarterly results, and raised its full-year profit and sales guidance for the second time this year. But investors seemed even more pleased with Intel's plan to ramp up share repurchases in the quarters ahead. 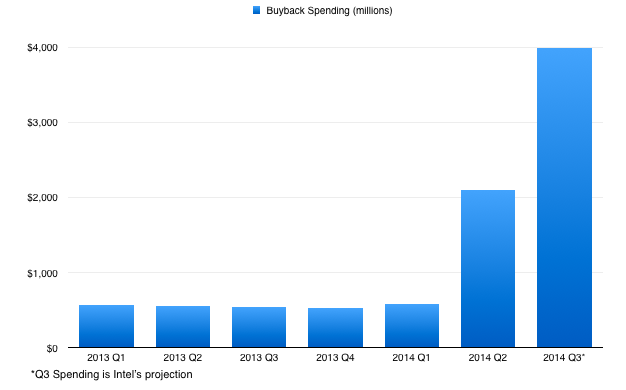 In the following video, Fool contributor Demitrios Kalogeropoulos puts that new buyback plan in perspective, noting Intel should, in six months this year, spend more than double what it spent on its shares throughout 2013.

A critical question for shareholders, though, is how the company plans to fund that massive spending increase. The good news is that it's not coming from a dividend cut, or through shortchanging capital investments. Instead, most of the funding will come from operating cash flow, which was a solid $21 billion last year, despite the weak business trends. Still, Intel will also have to make a change to its capital structure that some investors won't like: Management said that they plan on lowering the amount of cash that's kept on Intel's books going forward in order to fund this new pace of buybacks. Watch the video for Demitrios' full take.