The Dow Jones Industrial Average (DJINDICES:^DJI) is up more than 100 points with an hour left in Friday's trading session following yesterday's sell-off. Despite the horrific headlines surrounding the downed airliner at the Ukraine-Russia border, as well as Israel's new ground campaign in Gaza, investors are keeping their focus on separate, and more positive, developments.

"We have an economy that is expanding -- we have many data points that support that narrative -- we are in the middle of earnings season and earnings season has given investors reason to believe that what we have seen in the headlines over the last day or two, though very important, aren't what is driving investment decisions," Peter Kenny, chief market strategist at Clearpool Group, told Reuters.

Speaking of earnings season, Thomson Reuters data shows that 68.3% of S&P 500 companies that have reported earnings through Friday morning have beaten Wall Street expectations. With that in mind, here's a look at one Dow component that reported this morning: General Electric (NYSE:GE).

General Electric is continuing to refocus on its industrial roots and distance itself from the GE Capital finance business. Fortunately for investors, GE's industrial businesses are doing well. In GE's second quarter, industrial-segment revenue was up 7% compared to last year, and much of that was organic growth. Through the first half of 2014, GE's industrial organic growth checked in at 6%.

Overall, General Electric posted a strong quarter, with GAAP earnings from continuing operations of $3.6 billion on revenue of $36.2 billion -- respective gains of 13% and 3% compared to last year's second quarter.

Also of importance to investors: General Electric's backlog of orders has increased by $23 billion over the last year and sits at an impressive $246 billion. 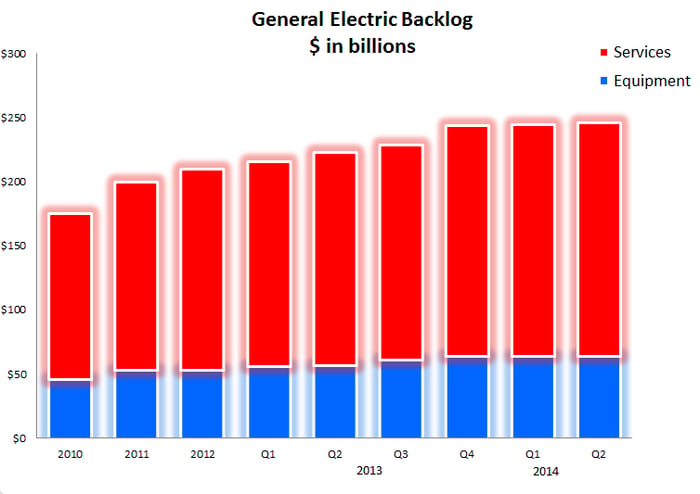 One development for investors to watch closely will be the fast-approaching initial public offering for GE's retail finance business, Synchrony Financial. GE is aiming to raise roughly $3.1 billion for the business by selling only a 15% stake.

In addition to its Q2 presentation, General Electric walked away from this week's Farnborough International Airshow a pretty big winner with $36 billion in orders at current list prices.

Speaking of the Farnborough Airshow, that brings us to a Dow component that's gearing up for its Q2 earnings release next week: Boeing (NYSE:BA).

Boeing also padded its incredibly large backlog of orders with an additional 201 orders roped in at the airshow. That pile of orders is valued at more than $40 billion at current list prices. While Boeing had a strong showing at the airshow, it was topped by European rival Airbus in terms of orders won. Airbus recorded deals for nearly 500 jets valued at more than $75 billion at current list prices. However, although this week's bragging rights went to Airbus, Boeing still has a significant total-orders lead in 2014. Boeing says its firm net orders for the year are at 783, which is far ahead of analysts estimates of 650 aircraft orders for Airbus.