Like all of its fellow Dow Jones Industrial Average (DJINDICES:^DJI) components, Microsoft (NASDAQ:MSFT) pays a dividend. Microsoft's quarterly payouts add up to a 2.5% yield these days, and the software giant's dividend policy stretches back to 2003.

With more than a decade of steady payouts behind it, Redmond is building a respectable dividend history. And that 2.5% yield is just below the 2.6% average yield among Dow stocks. Is it time to take Microsoft seriously as an income-generating investment?

The company has shown a remarkable commitment to growing its dividend payouts. Let's leave the first couple years out of this discussion, as they were skewed by a massive special dividend of $3 per share in 2004. The policy has seen eight increases over the last nine years, taking a break from payout boosts amid the 2008-2009 financial crisis. 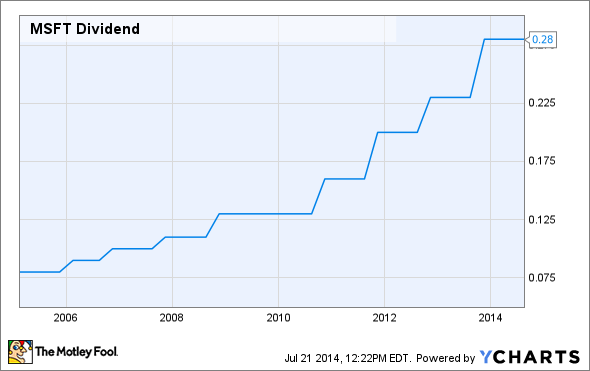 Over this span, the annual payouts have more than tripled with a 250% increase. That works out to an average increase of 14.9% a year, including that flatline two-year span between increases.

Not bad at all. But how much longer can Microsoft keep the dividend boosts coming?

Microsoft has grown its free cash flow by 72% over the nine years under our microscope, which is much slower than the payout growth rate. However, the company started out with plenty of headroom for future growth. So even today, after nearly a decade of rampant dividend increases, Microsoft pours just 37.5% of its free cash into printing quarterly dividend checks. 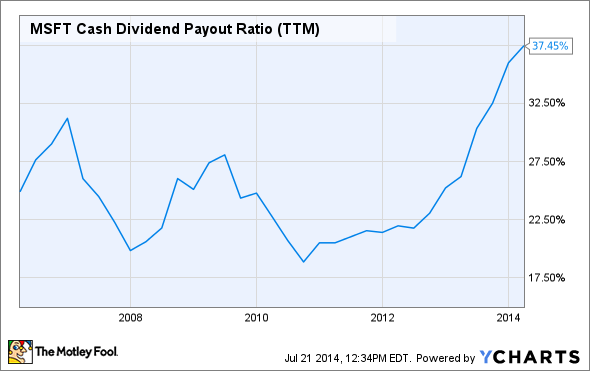 I'll note that the cash payout ratio is rising quickly these days. Microsoft's cash flow topped out in 2012 and has been on the decline ever since. Meanwhile, the 22% dividend increase near the end of 2013 was among the most generous jumps in the company's dividend-paying history.

However, that 37.5% payout ratio still leaves 62.5% of Microsoft's cash flow open for discussion. The company used $8.5 billion of its $22.7 billion in free cash flow to finance dividend payouts over the last four quarters. Meanwhile, it used $6.6 billion to repurchase and retire Microsoft shares.

What if Microsoft simply gave up on buybacks and funneled that budget straight into dividend increases? You'd end up with a 66% cash payout ratio and something like a 4.4% dividend yield.

Of course, that thought experiment makes a ton of unreasonable assumptions. Microsoft isn't likely to change its cash-sharing policies that drastically overnight, and share prices tend to make large moves when such radical dividend makeovers are announced. But, given a perfect world in which sudden policy changes happen, market prices don't react to game-changing news, friction is zero, and all cows are perfectly spherical, that's what we'd get.

In this highly unlikely scenario, dividend yields would explode to 4.4%, making Microsoft the second-best yielder on the Dow today. And even then, you could argue that the dividend still had room to grow: AT&T (NYSE:T) uses 74% of its free cash flow to produce the Dow's highest yield today.

In short, there's no reason to believe Microsoft needs to scale back its dividend boosts anytime soon. And if recently appointed CEO Satya Nadella can kick-start Microsoft's stalled innovation engines, the dividend policy should get even larger adrenaline shots in coming years.

Don't be scared of Microsoft's dividends. The company is poised to keep them flowing for many years yet.