New home sales plummeted in June and caused many investors to reevaluate their bets on homebuilders. A closer look at the numbers reveals strength and a possible upside surprise.

Homebuilders took a hit when the National Association of Homebuilders, or NAHB, reported a surprise drop in new home construction for last month. Housing starts plummeted 9.3% in June and May data was revised lower. This was in contrast to expectations for new construction of 1.02 million on a seasonally adjusted annual rate, or SAAR, slightly above the 1.0 million reported in May.

The weakness in construction came exclusively on a 29.6% drop in new starts in the southern region while starts in every other region increased from the prior month. This is even more of a surprise because the south has seen a stronger economic rebound and permits have shown a positive trend lately.

We could very well learn that there was a data-collection issue in the southern region. The plunge in new construction seems irregular based on previous data. Even if starts were correctly reported, there is a strong possibility that we see a rebound in next month's data, and longer-term fundamentals for the sector look promising.

In our digital age of quick data collection and even quicker dissemination, the possibility of a mistake in data collection or reporting is not out of the question. Several reasons make me believe some kind of data error is to blame here.

Looking at the 2014 new starts data by the NAHB shows just how odd the June report was given the previous trend. 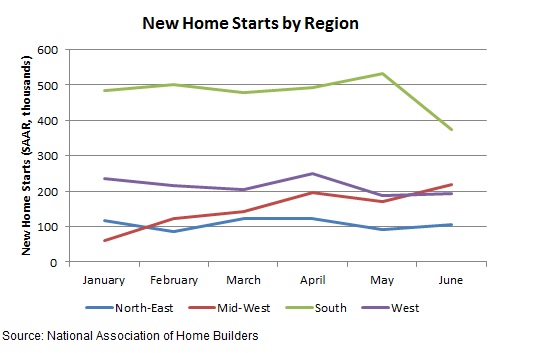 While the trend in new starts was not strongly positive, nothing pointed to such a volatile drop. In fact, new starts in the southern region had not varied by more than 8% in any month this year. New homes in the South dropped from being 54% of the total in May to just 42% in June. While the percentage of new construction in the region as a percentage of nationwide starts has varied, as high as 54% in February and May to as low as 46% in April, you would not expect such a drastic change in the region's relative importance.

Further, building permits are usually a good predictor of starts and do not explain the June weakness. Permits reported for the southern region fell by 5.5% in May but off of a strong increase of 14.7% in April. Permits for June were reported lower by 6.3% so there does appear to be some cooling but nothing to the extent of June's construction data. 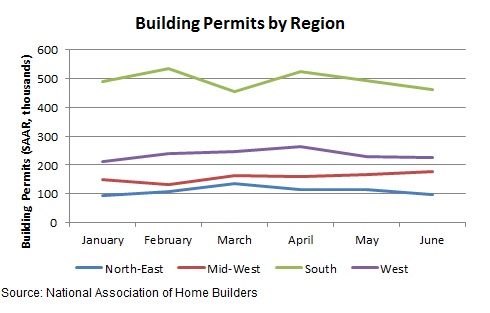 Job and income growth have been relatively strong in the South, especially given the strength in oil production and exports. Population growth has increased in the region's largest metropolitan areas, especially in Texas, Georgia, and the Carolinas. Excluding the South, new starts actually increased 14.6% in June with an increase of 28% in the Midwest. Even with the possibly erroneous data in June, starts are higher by 7.4% and permits are higher by 2.7% against the same month last year.

There is also good evidence for long-term support for the housing market. Despite a rebound in sales of existing homes, new home starts have never really recovered to the long-term average. According to data from the U.S. Census, single-family housing starts averaged 1.1 million a year in the decade leading up to 2000 but have averaged just 515,000 a year over the last five years. Using data on home starts back to 1985, I have constructed the chart below. If we assume that natural demand is for about 1.1 million new homes a year, the market has transitioned from a surplus of 2.5 million homes at the peak of the boom to a current deficit of 1.2 million homes. 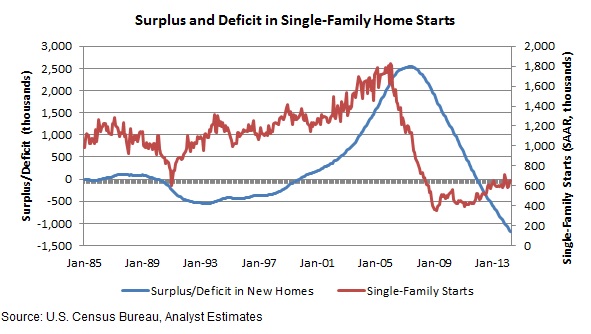 A rebound in July or a long-term trend higher, either is good for the space

Whether June construction data ultimately proves an error or not, there is good reason to believe that homebuilder shares have upside potential. July data for new starts could show a rebound and the deficit in new construction should support building for several years.

Investors should watch for several data releases over the next few weeks leading up to the July housing starts report. Data on existing home sales released this past Tuesday showed a 2.6% increase in sales. Pending home sales surged 6.1% in May and the inventory of unsold homes has increased, both pointing to higher activity over the summer. New home sales for June will follow on Thursday 24th of July but are expected to dip 5% to 475,000 after an 18% jump in May data. Relatively strong reports on sales should encourage homebuilders to start construction.

The July retail sales report, released around the middle of August, will also be an important reference ahead of next month's new home starts data. Sales at home improvement stores fell 1% last month, the largest decline since October and previewed the weak home starts data. Watch for a rebound in next month's report to gauge strength in construction of new homes.

Joseph Hogue has no position in any stocks mentioned. The Motley Fool has no position in any of the stocks mentioned. Try any of our Foolish newsletter services free for 30 days. We Fools may not all hold the same opinions, but we all believe that considering a diverse range of insights makes us better investors. The Motley Fool has a disclosure policy.