Facebook (NASDAQ:FB) has sure come a long way after going public at $38, subsequently plunging to under $18, and now recovering all the way back to over $76 Thursday. Not only have shares had quite a journey, but the underlying business has evolved in a big way too. Last night's earnings release is evidence of that.

Total revenue jumped 61% to $2.91 billion. Adjusted net income more than doubled to $1.1 billion. Global monthly active users, or MAUs, inched higher sequentially to 1.32 billion, with effectively all of those additions coming from abroad. Payments revenue continues to chug along uninspiringly.

The same old story
As usual, the theme of the report was that Facebook continues to crush it on mobile, which now comprises 62% of the advertising business. This is easily the biggest factor that has driven Facebook's recovery from $18, since back then investors were worried that Facebook would be unsuccessful in transitioning its business to mobile.

This remains one of my favorite quotes from Mark Zuckerberg about Facebook and mobile:

Finally, I wanted to dispel this myth that Facebook can't make money on mobile. This may have seemed true earlier this year because we hadn't started trying yet. Today, after just six months of ramping up our mobile ads business, we're already at a point where 14% of our ad revenue this quarter is from mobile. That's about $150 million. And the most important thing to understand here is that we're just getting started with our mobile product development and monetization.

That was in October 2012, less than six months after Facebook went public when said mobile fears were running rampant. This is what's happened now that Facebook is indeed "trying." 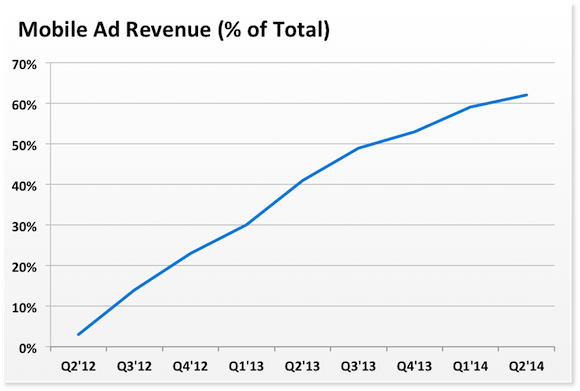 Here it is in dollar terms, which is even more impressive in my opinion. 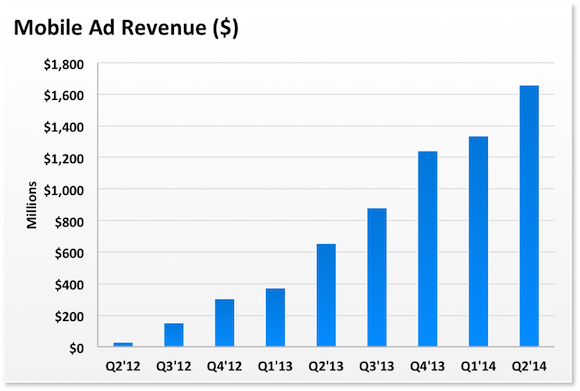 In just over two years, Facebook has ramped its mobile business from zilch to nearly $1.7 billion last quarter. Facebook now has 1.1 billion mobile MAUs, meaning 4 out of every 5 users accesses the service via mobile devices. In fact, 30% of MAUs only use mobile to get on Facebook.

Here's how mobile ARPU has risen over the past 2 years. 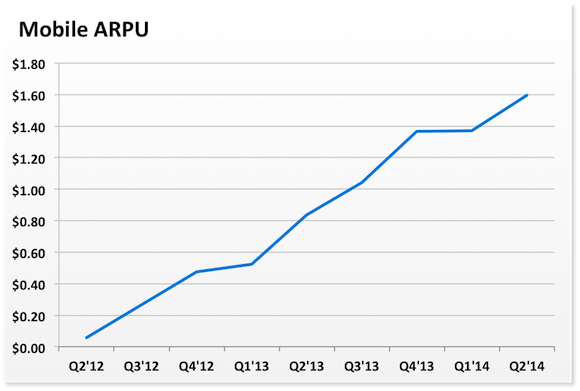 Overall ad loads are declining, but the good news is that pricing is soaring thanks to mobile. Mobile ad prices jumped 123% last quarter. There's less real estate to display ads on mobile relative to desktop, but fortunately News Feed ads are extremely effective and that gives Facebook pricing power. The vast majority of users never click on those right-hand rail display ads promising killer abs anyway. This is all about quality over quantity.

It gets better
Additionally, Facebook continues to flex its operating leverage muscles. Since Facebook's cost structure is primarily fixed, mostly related to operating data centers, revenue growth translates into margin expansion. That's helped operating margins tap a fresh all-time high of 48%. Compare that to a 31% operating margin a year ago and you'll quickly see how scalable this business truly is.

Facebook continues to trade at lofty premiums, but there should be little doubt at this point that it has carved out a highly profitable social niche for itself. A Shareaholic report from earlier this week said that Facebook drove 23% of all social referrals in June, over four times that of its nearest competitor (Pinterest). Facebook is here to stay.