When Sempra Energy's (NYSE:SRE) Cameron LNG facility comes online around the end of the decade it will provide a key fuel to boost the company's earnings. In fact, that one facility will add between $300-$350 million to its bottom line and push its overall earnings growth from 8%-10% through 2018 to 9%-11% through 2019. However, Sempra Energy's LNG fueled earnings doesn't end when Cameron LNG comes online. That's because, like both Cheniere Energy (NYSEMKT: LNG) and El Paso Pipeline Partners (NYSE: EPB), Sempra Energy isn't just building an LNG facility, but planning to build an LNG franchise.

The current plans call for Cameron LNG to have three liquefaction trains to fuel exports out of that facility. Those trains are expected to each have the capacity of 4.99 million tonnes per year. However, Sempra Energy sees the potential to export even more gas out of Cameron. As the slide below notes, the company sees de-bottlenecking at the facility providing additional export capacity. 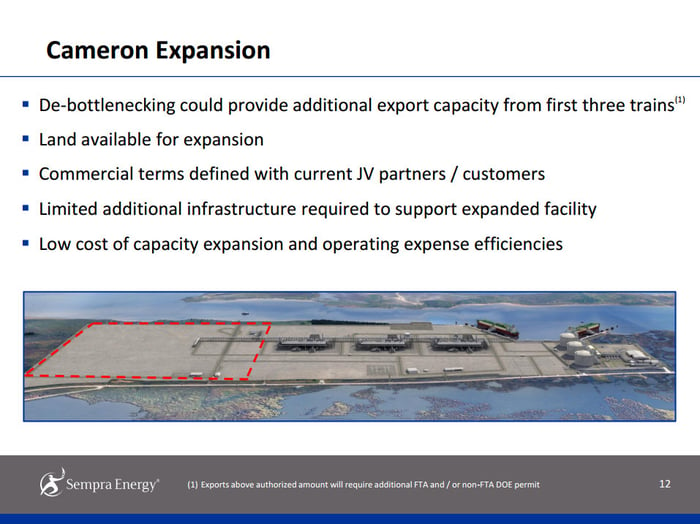 At the company's Analyst Conference earlier this year Mark Snell, the President of Sempra Energy's LNG Operations, said that de-bottlenecking could enable Sempra Energy to export another 1-2 million tonnes out of Cameron. Further, as that slide above notes, the company has land available for expansion. In fact, it's enough land to build two more liquefaction trains. Further, it wouldn't need to invest as much money to get those two additional trains built as the company already has most of the infrastructure in place to support an expanded facility.

Expanding an existing site is one of the ways Cheniere Energy plans to grow its LNG business. The company is currently constructing four LNG trains at its Sabine Pass facility. However, it's also looking to expand that site and add two more liquefaction trains in the future.

Energia Costa Azul Liquefaction
In addition to expansion opportunities at Cameron, Sempra Energy has the potential to expand its LNG franchise by building an export facility in a second location. That's the growth path both Cheinere Energy and El Paso Pipeline Partners are taking as both are looking to build two separate LNG facilities. Cheinere Energy is currently looking to build a second facility that will have three LNG trains at Corpus Christi while El Paso Pipeline Partners is pursuing an LNG facility along the Gulf Coast as well as a facility along the East Coast.

Sempra Energy is considering a second LNG facility at its Energia Costa Azul facility, which is currently an LNG import facility on the West Coast of Mexico. As the slide below notes, the company does have space for a liquefaction site.

There's one big advantage to turning this into an export facility and that's the fact that it's located on the West Coast, meaning it's a shorter export route to Asia than America's Gulf Coast. However, there are some issues with this location. There isn't a lot of land available with the company seeing a facility only having one or two liquefaction trains. Further, the facility is already fully contracted through 2028 as an import facility, so current customers will need to see more value in converting the facility to handle exports than for its currently approved import usage. 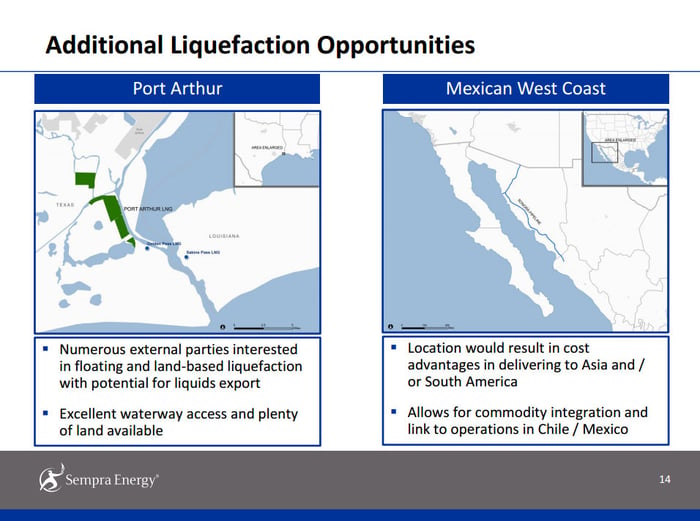 Also noted on that side is that Sempra Energy owns land in Port Arthur, Texas. The original plan for that land was to be used to build an oil import facility. However, it has excellent waterway access and plenty of available land that the company could build either a floating or land-based liquefaction facility for liquids exports.

Investor takeaway
Like both Cheniere Energy and El Paso Pipeline Partners, Sempra Energy has the potential to build not just an export facility but an LNG franchise. This would enable Sempra Energy to use LNG to fuel earnings growth for years to come as opposed to seeing just one big boost in 2019. This adds some compelling upside for investors that plan on holding Sempra Energy for the long-term.