Two variants of the A8 processor

According to Arcuri, the 5.5-inch variant of the iPhone 6 will sport a distinct and more powerful variant of the A8 system on a chip that's slated to make its debut in the 4.7-inch iPhone 6. Though Arcuri lacked specific details (it would be surprising if detailed specifications of this processor were to leak), he did claim that the chip slated to go into the 5.5-inch iPhone would be larger than the variant in the 4.7-inch version.

This is a question of economics
Typically speaking, the cost of a chip is very directly correlated to the size of the chip. Why? Well, semiconductor products are baked onto what are known as semiconductor wafers. These wafers generally have a fixed diameter of 300 millimeters (though smaller wafer sizes are possible), and as a result, the smaller the die, the more chips a company like Apple can get per wafer.

To illustrate, look at the following images. On the top is a wafer with chips that weigh in at 12 by 12 millimeters, while on the bottom we have a wafer of identical size but with chips that come in at 10 by 10 millimeters. See the black marks? Those represent "defects" on the wafer. Any chip that is touched by a defect is unusable. 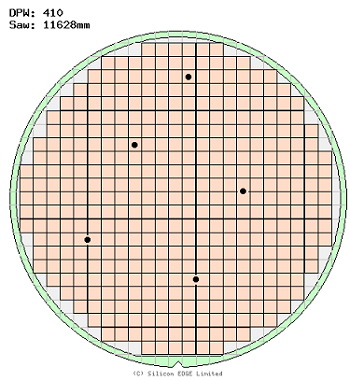 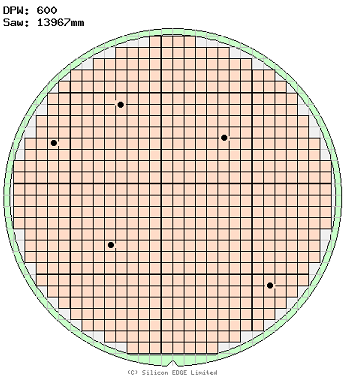 What does this all have to do with iPhone 6?
Given this discussion, the rumor from the Cowen analyst makes perfect sense. Apple is almost certainly going to price the 4.7-inch iPhone at roughly the same price points that the current 4-inch iPhone 5s comes in at, but the 5.5-inch model is likely to be more expensive -- commensurate with higher material costs.

Under the supposition that the 5.5-inch iPhone will be at least $100 more expensive than its 4.7-inch counterparts (in line with how Samsung prices its Galaxy Note series versus its Galaxy S series), Apple can afford to put in a larger, more powerful chip into its larger iPhone while keeping gross margin percentage intact. In fact, by doing so, Apple gives customers yet another reason to buy up the iPhone stack beyond just screen-size preference.

One more thing
One final thing to note is that if Apple is indeed set to release a 5.5-inch iPhone, it's likely to increase the resolution (that is, the number of pixels on the screen) of the display on the 5.5-inch version relative to the 4.7-inch model to maintain the same pixels per inch (or, in other words, the sharpness). To play the latest games at these higher resolutions, Apple will need a faster graphics processor to drive that increased pixel count without seeing a negative performance impact.

It therefore stands to reason that if Apple is going to do a separate variant of its A8 for the larger-screen iPhone, it will probably use the additional chip real estate to bolster the graphics processor.

Foolish bottom line
Though almost everything pertaining to the next-generation iPhone models is rumor and speculation, the note from Cowen makes sense in context of the economic and technological trends and factors I've discussed here. Further, if the note is correct in that Apple will be putting together a beefed-up version of the A8 for a larger iPhone, such a chip need not be restricted to a larger-screened iPhone -- it could be used in the next iPad Air with the less powerful variant used in the iPad mini with Retina Display to further differentiate the former.

1 Way That Apple, Inc. Could Be Making the 5.5-Inch iPhone 6 Even Better @themotleyfool #stocks $AAPL Next Article
Current