China has a major air pollution problem on its hands. Its air is essentially filled with the ash that comes from burning coal to generate power and make steel. Chinese citizens are tired of the filthy air they breathe and want the Chinese government to do something about it.

And it has. For example, it recently shut down thousands of smaller, low-quality coal mines. China has also been upgrading the equipment used to burn coal, including new technologies like coal gasification and older tech such as adding scrubbers to existing power plants.

There's reason to be positive here, and the best case example comes from the United States. International coal giant Peabody Energy points out that the levels of regulated emission from U.S. coal plants have fallen nearly 90% since 1970. Meanwhile, coal use has increased 170%.

Not a cure all
The Chinese people would be thrilled to breathe cleaner air. So these efforts, and the results that will come from them, should help to quiet China's domestic complaints. But what about carbon dioxide and climate change?

China plans to build up to 50 coal to gas plants, which will allow China to turn coal into clean burning gas and keep pollution away from major populated areas. However, this would still emit a cumulative total of 1.1 billion tons of carbon dioxide. So the air in China's cities gets cleaner, but the world keeps getting hotter.

The solution, according to Greenpeace and other environmentalists, is to stop using coal. However, China has massive power needs. You can't develop economically without reliable electricity. So-called energy poverty means living without things we take for granted in the United States like medical care, refrigeration, and even lights. China has no choice but to keep building new power plants and, like it or not, coal is in the mix right now.

In fact, U.S. coal miners are pinning their hopes on Asian coal demand. Peabody Energy, for example, expects coal to account for 40% of global electricity growth through 2020. Since coal is cheap and, according to the International Energy Agency, 1.3 billion people, mostly in Africa and Asia, don't have access to electricity, Peabody's coal growth expectations aren't outlandish. China and fellow Asian giant India will be the big drivers.

Coal to the rescue?
And that's where things get interesting for Americans. The U.S. has massive stores of coal, with roughly a quarter of the world's total. That's more than any other nation, including China. Since the U.S. energy industry is shifting away from coal, exporting the fuel to nations still building out power systems is a huge opportunity. However, in order to export more coal more coal ports are needed. 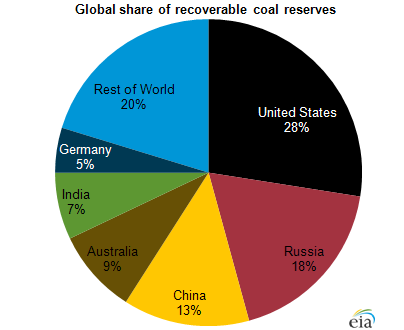 Not surprisingly, environmentalists in the U.S. are opposed to such ports and are asking that regulators take into consideration the pollution, carbon and otherwise, that coal will cause at its end destination before approving construction. That line of reasoning is gaining traction on the West Coast, where three of six proposed coal export hubs have been scuttled.

On one hand that's a win for the world, but on the other hand environmentalists are asking the United States to help solve China's pollution issues. Sure, pollution, particularly carbon, is global in scope, but China is a sovereign nation—is it our place to decide what fuels they use? And, from a business perspective, if China is going to find coal to burn anyway why shouldn't the struggling U.S. coal industry take advantage of the opportunity?

From the environmental angle, the answer is easy—unfortunately that's not the only view of this issue.

The best solution may be found in technology. For example, Southern Company is building a new coal power plant that will capture carbon emissions. NRG Energy is working on a similar retrofit at one of its existing coal plants. If China is going to burn coal anyway, these high-tech solutions to a global problem are likely to be the better way to push China toward change.

This would reduce carbon emissions, allow the U.S. coal industry to participate in a key foreign market, and give the companies that make carbon capture technology an even bigger market to sell to. And all of that without a fight.

Is It America's Job to Save China's Environment? @themotleyfool #stocks Next Article
Current