Equity investors search far and wide for consistent growth, profits, and the ability to capture larger gains in the future. Renewable Energy Group (NASDAQ: REGI) delivered all three (again) in the second quarter of 2014, but it's still being disrespected by investors. The largest biodiesel producer in the United States continued its steady expansion and pushed past the $1 billion watermark for total assets on the heels of two important acquisitions: the Fischer-Tropsch company Syntroleum and Tyson Foods' 50% interest in a renewable diesel facility.

More important than growth in assets, which were largely offset by increased debt, net book value leapt to a record $673 million. Despite the progress, Renewable Energy Group trades at a market valuation of just $500 million -- a steep discount to book value -- while shares have been whacked 24% in the last year. 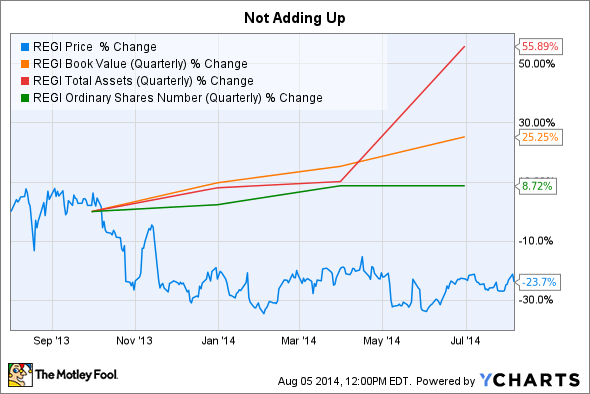 REGI data by YCharts
*Share count has actually increased by 9.1% to 42.31 million.

What gives? Most of the disrespect comes from the continued uncertainty regarding the nation's Renewable Fuel Standard, or RFS, which dramatically lowers margins for biodiesel producers by removing key subsidies such as the Blender's Tax Credit, or BTC. But some of the disrespect can also be chalked up to a misunderstanding about the company's business -- something management attempted to clear up on the last conference call.

Mr. Market is distracted by biodiesel business
Even with substantial growth projects in the pipeline (discussed in next section), Renewable Energy Group will remain largely dependent on first-generation biodiesel production for total revenue. The good news is that a focus on diversifying feedstock capabilities across its fleet of biorefineries in recent years has resulted in unparalleled operating efficiency. That compounds the profit potential when subsidies are active and allows the company to at least break even when subsidies are caught up in political battles. The latter is the bad news.

Consider the differences between the first half of 2013 (with BTC) and the same period this year (without BTC):

While breaking even in such volatile market conditions is something many biodiesel producers can only dream of, the biodiesel market doesn't instill much confidence in investors, who would rather steer clear of biofuels stocks. And that's exactly why Renewable Energy Group is working hard to diversify its business.

Increasingly complex and diverse business
Renewable Energy Group may be the largest biodiesel producer in the country -- and will remain heavily dependent on the market -- but its business is no longer simplified by first generation biofuels alone. By the end of 2014 the company will have sold biodiesel, green heating oil (qualifies for state subsidies independent of BTC), renewable diesel (a second generation biofuel that qualifies for higher subsidies than biodiesel), and small quantities of other industrial intermediate chemicals, such as naphtha and propane. In the next several years, investors will have to keep track of specialty chemical sales such as flavors, fragrances, lubricants, polymers, and more from the company's synthetic biology-powered industrial biotech platform. Throw in wildcards such as international business expansion and feedstock distribution and the business gets even more difficult to predict. It's obvious that the uncertainty of the biodiesel market and unpredictability of future growth spooks investors and analysts away from the business, although I see that as an exploitable opportunity for investors.

Do you respect future growth?
Renewable Energy Group expects its biodiesel business to report an adjusted EBITDA between breakeven and $20 million in the second half of 2014 assuming the BTC isn't reinstated. Unfortunately, investments in renewable diesel (REG Synthetic Fuels from Syntroleum and Tyson Foods acquisitions), renewable chemicals (REG Life Sciences from LS9 acquisition), and energy services will drag total adjusted EBITDA to between -$30 million and breakeven.

That's scary for the short term, especially considering that the value created from developing those businesses will take several years to make a meaningful impact on the business. But I think investors should view the growth in the pipeline not as a chaotic disruption to the business, but as a move toward valuable diversification. Mr. Market doesn't respect future growth for the biodiesel leader -- will you exploit his nearsightedness?