Big oil giants, including BP plc (NYSE:BP), ConocoPhillips (NYSE:COP), and the ExxonMobil Corporation (NYSE:XOM), managed to dodge a big tax hike in Alaska this week. While the vote was closer than big oil likely wanted to see, Alaskans decided not to repeal the 2013 "More Alaska Production" Act. The law, which went into effect in January, reversed a progressive tax system that the industry said was making it unappealing to invest in Alaskan oil production. Now, these big oil companies need to "put their money where their mouth is," according to Gov. Sean Parnell, and invest to grow the state's oil production.

Some have called the new law a big handout to big oil as the state stands to lose $2 billion in tax revenue this year. However, that tax break is designed to incentivize oil companies to invest in the state to boost production. So far it appears that the law is working. ConocoPhillips, for example, has doubled its capital spending in Alaska over the past two years. As the following slide notes, the company is specifically citing these better fiscal terms as the reason why it has increased its investments. 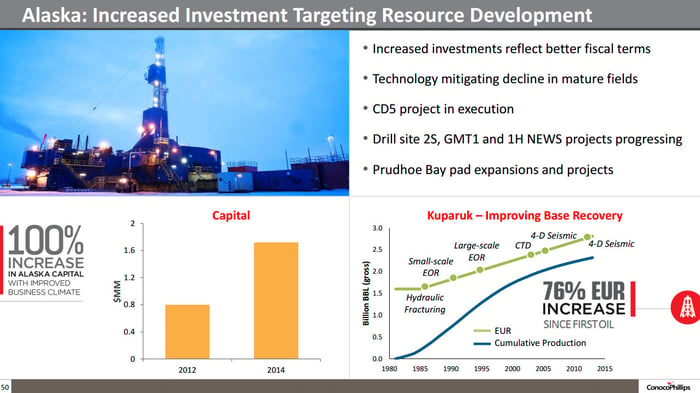 This additional capital has enabled ConocoPhillips to add two rigs to its Kuparuk field in the North Slope. However, the company isn't stopping there as it is investing to build another drill site for a third rig in the Kuparuk River Field. Further, it's planning the Greater Mosses Tooth #1 development in the National Petroleum Reserve and the 1H Northeast West Sak, or NEWS, development. These three additional projects represent capital investments of upwards of $2 billion and would add 47,000 barrels of oil production per day by 2017 to the state if approved. That's a big boost considering that statewide production is down to around 500,000 barrels of oil production per day.

ConocoPhillips isn't the only oil company that has already taken advantage of the new tax laws. In the last year BP has added two new drilling rigs to Alaska, which brought its fleet up to nine. This was part of a billion dollars in new investments the company is planning to make over the next few years. Further, it is evaluating $3 billion in additional projects in Prudhoe Bay's west end that could result in 110 new wells being drilled in the state over the next decade. This is an investment that is much more likely to move forward now that Alaska's 2013 tax law won't be overturned.

Fueling Alaska's future
While the "More Alaska Production" Act is intended to provide a boost to that state's sagging oil production, it could do more than just entice companies to pursue new oil projects. One of the biggest beneficiaries of the law not being repealed could be the Alaska LNG project, which is a joint venture between ConocoPhillips, BP, ExxonMobil, TransCanada (NYSE:TRP) and the state. The $45 billion-$65 billion liquefied natural gas export project likely would not move forward if the law had been repealed as it would have been a signal to energy companies that the state isn't open for business. This project actually represents more than four times the projected $10 billion in additional oil investments that the oil tax law is expected to produce over the next decade, so it's a really big deal for the state to move forward with this project.

Alaska has immense natural gas deposits in the North Slope that have yet to be developed. Further, most of the associated natural gas that is produced in the state is reinjected into the ground as there are few places for it to go other than being flared off. So, by developing its natural gas resources and exporting it to places like Asia, Alaska stands to generate billions of dollars in revenue, which should more than offset the lost oil taxes over the long term.

Investor takeaway
Big oil gets to keep its big tax break in Alaska for now. However, it will need to make good on its promises to grow production in the state. While many producers have already increased their investments, Alaska will need to see oil production and jobs meaningfully increase in the near future or else big oil likely won't be able to dodge a future attempt to repeal this law.