Shares of TE Connectivity (NYSE:TEL), the leading supplier of electronic connectors, have been rising since the end of 2012, nearly doubling in value in less than two years. The stock now trades around $62 per share, giving the company a market capitalization of nearly $26 billion. 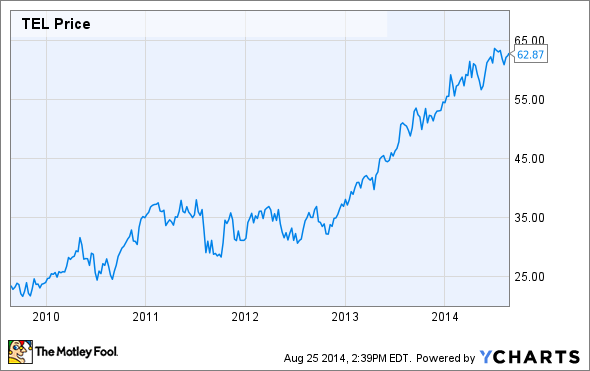 While investors in TE Connectivity have been rewarded over the past two years, there are a few reasons to believe that TE Connectivity's stock could continue to rise in the long term. There's no guarantee the stock will rise, but let's look at three factors that could push the stock price up.

The most important part of TE Connectivity's business is the transportation solutions segment, which services the automotive industry. During the most recent quarter, this segment accounted for 44% of the company's revenue and about 61% of the adjusted operating profit. The adjusted operating margin was in excess of 20%, well above every other segment.

TE Connectivity's long-term success, then, is intimately tied to the strength of the automotive market. Since the end of the recession, global auto sales have been growing relentlessly, reaching 82.8 million in 2013 and forecast to hit 100 million by 2018. In the U.S., auto sales surpassed pre-recession highs in 2013, and so far in 2014 sales are on track to grow further due to strong sales of both trucks and SUVs.

The real driving force for TE Connectivity going forward, however, is China. During the most recent quarter, sales in the transportation segment from China were up more than 20%, and China is now the largest automobile market in the world, with nearly 22 million vehicles sold in 2013, with around 18 million of those being passenger vehicles. In the U.S., 15.5 million passenger vehicles were sold in 2013.

Given China's enormous population, auto sales in the country could continue to rapidly grow for years to come, and that's very good news for TE Connectivity.

TE Connectivity has been focusing on servicing harsh environment markets, like automotive and industrial, and as of the most recent quarter about 70% of its revenue comes from these markets. Broadening its line of sensors that target these industries makes a lot of sense, especially given that the company's margins in the transportation and industrial segments are far higher than the rest of the company. Measurement Specialties has nearly doubled its revenue since fiscal year 2010 to $413 million, and it managed a 12.1% operating margin in fiscal year 2014. Once integrated into TE Connectivity, the potential for both continued growth as well as margin expansion could give a boost to both TE Connectivity's earnings and stock price.

TE Connectivity's second largest and second most profitable segment is industrial solutions, and during the most recent quarter demand from the aerospace industry was one of the key drivers behind the segment's growth. Going forward, continued demand for commercial aircraft could boost revenue and profits for the industrial solutions segment further.

Boeing publishes a long-term forecast for the aerospace market, and the company's predictions bode well for TE Connectivity's aerospace business over the long term. Boeing expects airplane fleets to grow in size by 3.6% annually through 2033, with the number of passengers growing at a faster 4.2% annual rate. Much of this demand will come from the Asia Pacific region, and Boeing expects a total of 36,770 new aircraft to be built through 2033, with 42% replacing older, less efficient planes, and the rest leading to fleet growth. With fuel being the largest component of airline cost structure, there's a real incentive for airlines to buy more fuel-efficient planes.

The aerospace business isn't nearly as big as the automotive business for TE Connectivity, but the strong long-term demand for airplanes could still drive the company's earnings and stock price higher.