Prescriptions of Gilead Sciences' hepatitis C drug Sovaldi peaked, but sales will pick up after the new combination product is approved.

Gilead Sciences' (GILD 0.13%) hepatitis C drug scored $3.5 billion in sales in the second quarter, but prescriptions have been falling since before the quarter closed.

First, new prescriptions started to fall in March. And then, as you'd expect, total prescriptions, which includes refills, peaked a couple of months later. There isn't necessarily a direct correlation between prescriptions and sales because we don't know how much the remaining patients are paying for the drug, but it appears as if Sovaldi sales in the third quarter will be lower than in the second quarter. 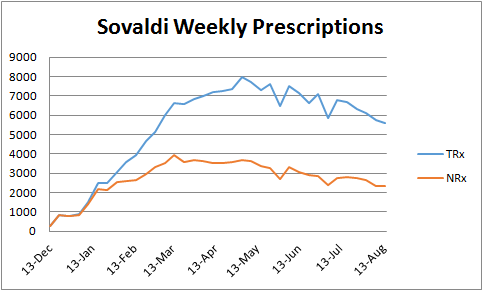 Fret not
It's just warehousing.

While prescriptions for Sovaldi have peaked and will decline further, demand for drugs containing Sovaldi will pick up once Gilead's Sovaldi-ledipasvir combination is approved by the Food and Drug Administration later this year.

In fact, that's the reason for the decline in Sovaldi prescriptions. Hepatitis C is a very slow-developing disease. For patients who haven't progressed so far that they're experiencing liver damage, getting treatment now or in six months isn't going to make much of a difference.

We saw this same phenomenon with Vertex Pharmaceuticals' (VRTX 0.13%) Incivek. U.S. sales peaked in the fourth quarter of 2011 as doctors anticipated the 2013 approval of Sovaldi, which has better efficacy than Incivek.

The main advantage of Sovaldi-ledipasvir isn't necessarily on the efficacy side, but Sovaldi-ledipasvir can be taken alone, while many hepatitis C patients currently have to take Sovaldi with difficult-to-tolerate injected interferon. Beyond the lack of injections, the all-oral combination is a huge advantage because of the flu-like symptoms that many patients experience with interferon.

I'm actually rather surprised Sovaldi has done as well as it has; I figured only patients whose disease had substantially advanced since the launch of Incivek would take Sovaldi, and the rest would wait for the all-oral treatment.

Off-label combinations
Part of the better-than-expected sales likely has to do with Johnson & Johnson (JNJ -0.39%) gaining FDA approval for Olysio. The drug can be used in combination with Sovaldi without the need for interferon, although it hasn't been approved for that indication.

The next round of warehousing
Merck (MRK -1.39%) is working on an all-oral treatment that could have a shorter treatment time. So is Gilead. If they're successful in the clinic, doctors could stop using Sovaldi-ledipasvir (or combinations of Sovaldi and other drugs) and wait for the approval of the faster-acting combination.

Longer term, we could see another warehousing event as the drugs approach their patent life. If generic drugs are a year away, patients may be willing to wait that long to get reduced co-pays.