VMware is a dynamic stock with plenty of growth drivers. But investors also have several reasons to worry about future share price drops.

In the meantime, VMware has boosted its share buyback program and unleashed an avalanche of new products. These are the three catalysts most likely to help VMware investors in the near future.

But it's not all lollipops and free drink tickets for VMware investors. What follows are the three most influential negative catalysts affecting the business and its stock value. 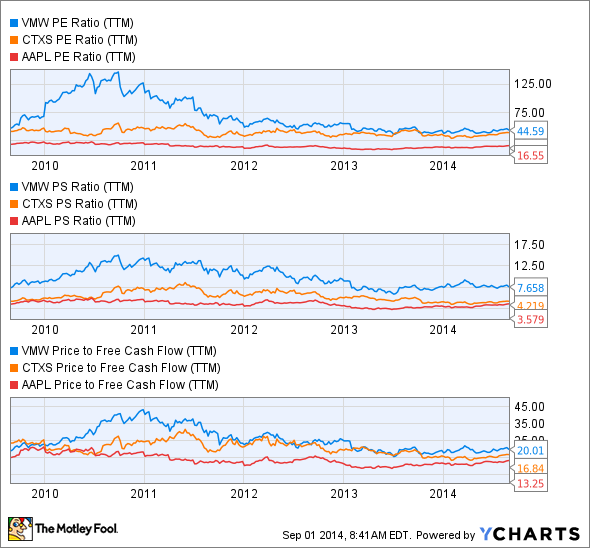 Even in the heyday of Apple's strongest iPhone and iPad growth, VMware shares remained far more expensive than Citrix and Apple. And despite VMware's P/E, P/S, and P/FCF ratios shrinking significantly from 2010's five-year highs, they all remain exorbitant.

Some stocks are great investments thanks to their low valuation ratios. Setting up a mismatch between high financial strength and low investor expectations can lead to the coveted "multiple expansion" phenomenon. Many analysts argue that Apple is a great example of this spring-loading right now. But VMware's high ratios work the other way around. There's no rocket-ride catalyst to be found in VMware valuation analyses, but plenty of downward pressure.

This high-tension situation leads to rattling investor nerves. For example, VMware exceeded analyst expectations on both the top and bottom lines in the first quarter of 2014, and reaffirmed its full-year guidance. Shares plunged 11% overnight on this seemingly positive report. That's life for high-wire acts like VMware.

It would not take much to trigger another sudden price plunge. Investors with a low tolerance for risk had better keep their mitts off this stock. The spiking antacid budget really digs into investment returns.

OpenStack
VMware had the first-mover advantage in virtual computing, but the market has matured. These days, the company faces a plethora of strong competitors, including hungry upstarts and established titans.

Kick-started by NASA and industry veteran Rackspace Hosting (RAX), propelled further by chief contributor Red Hat (RHT), and backed by an all-star cast of technology giants, this VMware vSphere rival is as serious as a heart attack.

OpenStack was created as an alternative to proprietary cloud computing platforms, where VMware's products were (and are) the market leader. But VMware joined the OpenStack Foundation as a Gold member in 2012. If you can't beat 'em, join 'em.

When VMware was a brand-new OpenStack Foundation member, OpenStack insiders worried the addition would destroy the platform from within. "For its $200,000 annual gold member fee VMware just elegantly subdued one of its most feared competitors and we, at the foundation board, allowed that to happen. I fear it may have been the board's first wrong decision," said OpenStack board member Boris Renski at the time.

But that hasn't happened. Instead, OpenStack has become a serious growth driver for major backers such as Red Hat and Rackspace. And rather than subverting OpenStack from the inside, VMware is making a serious effort to build platform support into its own products.

As an example, VMware used the opening keynote at its VMworld conference to show how smoothly vSphere works in an OpenStack data center. VMware's blog post on this matter was humbly titled "VMware and OpenStack -- Dawning Of A New Day."

That doesn't look like a conquering emperor's victory lap. It's more like a champion acknowledging the power of a rising rival.

VMware's first-mover advantage is giving way to a dynamic marketplace, and OpenStack just might demolish the reigning champion in the end.

Earnings quality
There's no question that VMware knows how to grow. However, one of its most closely watched metrics might not have the organic support that cash-focused investors crave.

Over the last five years, VMware has grown its adjusted earnings per share by 28.3% compounded annually. However, free cash flow only rose 23.4% annually over the same period. In other words, VMware isn't generating real cash profits at the same fantastic rate that it grows headline-friendly earnings. 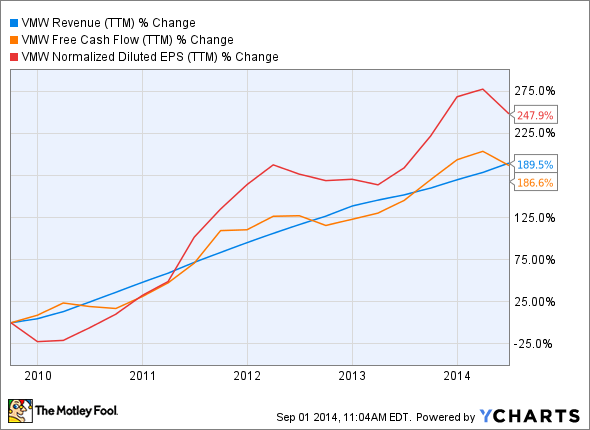 To be clear, there's nothing wrong with growing free cash flow by 23% a year, in line with the equally impressive revenue growth trend. These are strong results, any way you slice them.

But many investors find it disturbing when accounting-processed earnings outrun cash profits by a large margin. That is what's happening here, over a long period to boot.

Sorting high-quality earnings from low-quality earnings saves investors pain down the road. The gap between cash and noncash profits isn't enormous in VMware's case, but it's large enough to raise the occasional eyebrow. Keep an eye on this chart to make sure the discrepancy doesn't grow too much wider.

Will Regulators Shoot Down Broadcom's Acquisition of VMware?