According to energy research firm Wood Mackenzie, there is at least $118 billion in future riches still trapped in North Dakota thanks to its oil-rich shale plays. But North Dakota's Bakken shale is just one of the many shale oil, or tight oil, formations in America. Because there are so many shale oil formations, and an unbelievable amount of oil in each one, there is a lot of money yet to be made. Let's take a look at some of the companies that could make investors money as they stake their claim to this black gold boom.

The following map details America's immense shale oil and gas potential as it outlines the various shale plays spread around the country. 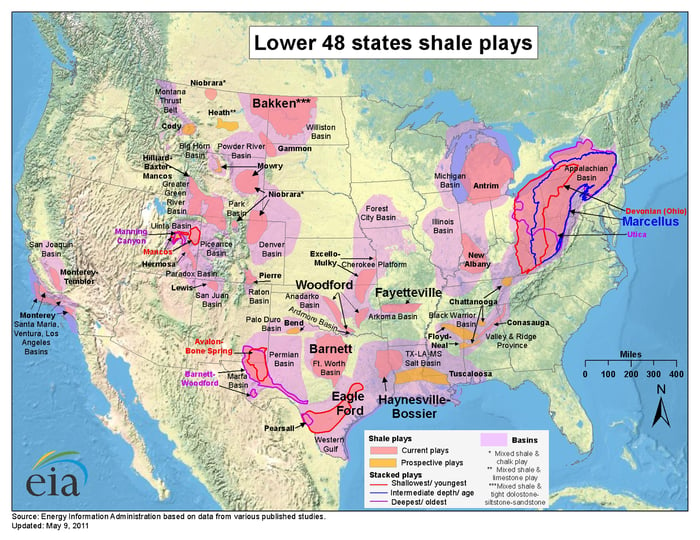 But when it comes to oil in particular, three plays currently stand out: The Bakken shale in North Dakota and Texas' Eagle Ford and Permian Basin shale plays, which include the Spraberry/Wolfcamp and stacked oil shale plays in the Delaware Basin. These shale plays are by far the biggest oil fields in the U.S. and among the largest in the entire world. As the following slide from an Pioneer Natural Resources (NYSE:PXD) investor presentation shows, the biggest shale play of them all is the Spraberry/Wolfcamp, which is nearly three times larger than the Eagle Ford shale. 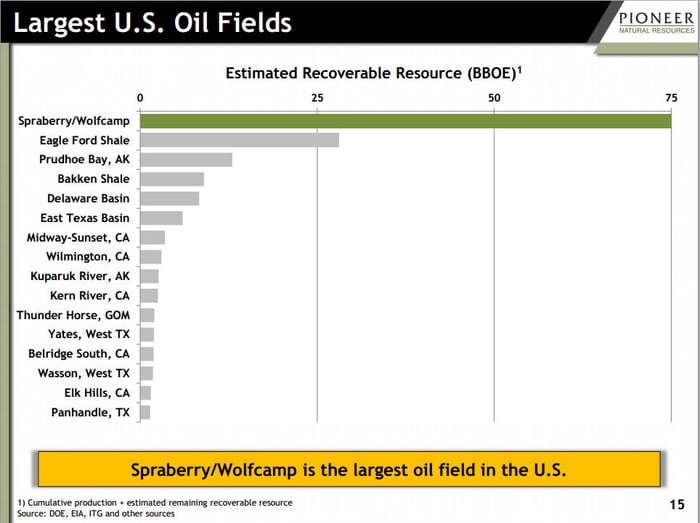 The game-changer for shale oil 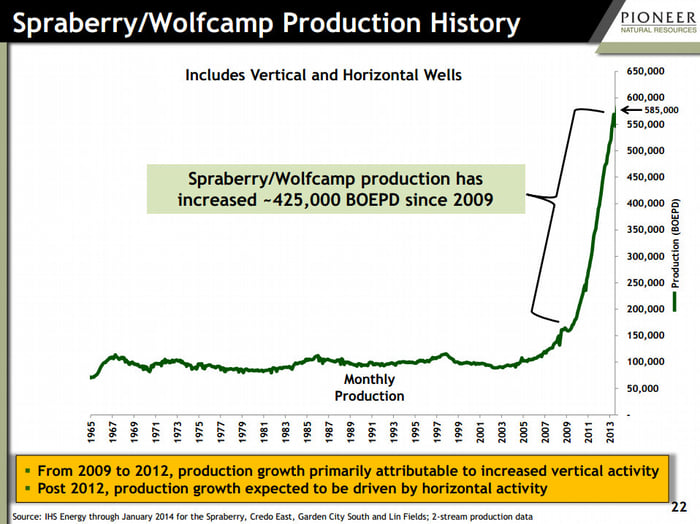 To give investors an idea of why horizontal wells are turning out to be a real game-changer for Permian Basin producers we just need to look at one example. Last year Pioneer Natural Resources' CEO Scott Sheffield discussed what his company saw by switching to horizontal wells by saying that in six months one of its wells had produced 140,000 barrels of oil equivalent. That's an astounding level given what he said next: "Our typical vertical well takes 30 to 35 years to produce a 140,000 on a vertical well. So we did that in six months." By simply shifting from a vertical well to one drilled horizontally, the company was able to pull forward three decades of oil and gas production by accessing oil it never could reach previously.

How to make money shale oil

Leading the development of America's shale oil plays are independent oil and gas companies, which are simply oil companies that explore for and produce oil and gas. Because these companies aren't burdened by investments to maintain refineries or pipelines, all of their capital is invested to find and develop oil plays. That makes this sector one of the best ways to make money from the shale oil boom.

One company worth noting is Pioneer Natural Resources, which is leading the development of the Permian Basin. It believes it's sitting on over 11 billion barrels of oil equivalent in the Spraberry/Wolfcamp and Eagle Ford shale plays. The company is currently working on a decade-long development plan in order to create the most value out of that position. The current portion of that plan puts it on pace to double its 2013 production by 2018, with most of the increase coming from higher-margin oil. Needless to say, Pioneer Natural Resources has the potential to make investors a lot of money from shale oil.

Joining it in the Permian Basin is another shale oil producer, EOG Resources (NYSE:EOG), which recently made a new discovery in the basin. EOG Resources' focus is on the Delaware Basin portion where it recently announced the discovery of the Second Bone Spring Sand to go with its Leonard and Wolfcamp plays. But EOG Resources' story extends well beyond the Permian Basin, as it's a leader in developing America's other two top shale oil plays with it being the largest oil producer and acreage holder in the Eagle Ford shale. With a 15-year drilling inventory between these three shale plays, as well as a position in the emerging oil shale plays of the Rockies, EOG Resources should continue to make a lot of money from shale oil in the years ahead.

A final name worth noting is Whiting Petroleum (NYSE:WLL). Once it closes its acquisition of Kodiak Oil & Gas Corp (NYSE: KOG) later this year Whiting Petroleum will be the largest oil producer in the Bakken Shale. Given that the Bakken shale still has $118 billion left to give, that suggests that Whiting Petroleum will get a pretty big piece of that pie. However, on top of its strong Bakken position Whiting Petroleum has joined EOG Resources and others in accumulating a large acreage position in the emerging Rockies shale oil plays. This emerging upside, when combined with its Bakken dominance, could make its investors a lot of money in the years ahead.

Investor takeaway
There are untold billions yet to be made off of America's shale oil boom. As three of the larger, most dominant players in each shale play, these three companies have the potential to make a lot of money for investors in the decades ahead. These aren't the only ways to make money from shale oil, so investors certainly have a lot of options.