According to recent data, the number of car loans given to subprime buyers has risen dramatically in recent years. As a result, more borrowers are struggling to make payments, and repossessions have surged. The Washington Post has even gone so far as to call the increase in subprime auto lending a "bubble."

In fact, the easy automotive credit and rising delinquency and repossession rates are eerily reminiscent of the early days of the mortgage crisis, and we all know how that turned out. Should we be concerned about this trend?

The data
According to data by Experian, the rate of auto repossessions skyrocketed by more than 70% during the second quarter of 2014. And although the overall percentage of auto loans that end up in default is relatively low (just 0.62%), this is definitely a trend to keep an eye on, due to the sheer number of subprime borrowers out there.

Subprime borrowers are defined as those with credit scores between 550 and 619; those with even lower scores are classified as "deep subprime". The two categories combine for over 12 million active auto loans, or nearly 20% of the total. And this rate is rising. In 2013, 27% of new auto loans went to subprime borrowers. So, if the economy were to go south, there is a lot of opportunity for disaster here.

These types of loans tend to come with very high interest rates, and some dealers even charge subprime buyers more for the car itself, taking advantage of the fact that these buyers don't have a lot of options available to them. In fact, according to S&P, subprime auto loan rates can be as high as 19%. This produces high payments, which make the car less affordable for the buyers.

It's like deja-vu
I briefly mentioned that the overall repossession rate is still pretty low, so why should we be so concerned?

Basically, I think this is a cause for concern because it's happening during good economic times. The home foreclosure rate was relatively low in 2005 while property values were rising at double-digit-percentage rates, but we all saw what happened when the economy took a turn for the worse.

There are a lot of similarities between what's going on in the auto lending industry now and what went on in the mortgage industry before the crisis hit.

For one, subprime car loans are being issued with very high loan-to-value (LTV) ratios, just like pre-crash mortgages. Alarmingly, the average LTV on car loans to subprime borrowers is 114.5%, meaning the average borrower owes 14.5% more than their car is worth.

I mentioned that dealers tend to jack up the price of the cars sold to consumers with spotty credit, so people end up owing more on their cars then they're worth. Just like with home foreclosures, this can hurt the lenders if they have to repossess and sell the car.

And, it also gives the borrower less incentive to make payments in the event of a job loss or other bad situation. In other words, if you only owe 70% of what your car is worth, you could theoretically sell it and walk away with some cash. You also have more to lose by allowing the bank to take it away. On the other hand, if you owe more than the vehicle is worth, it's easier to simply stop making payments and let the car become the bank's problem, just like a lot of underwater homeowners did once the value of their homes plummeted.

Also, don't forget that a car is a depreciating asset. A house (theoretically, at least) will hopefully increase in value over time. So, if a bank forecloses on a house, it could choose to hang on to it until the value rises, thereby avoiding large losses.

Even the way subprime car loans are advertised is eerily similar to some of the subprime mortgage ads we used to see. 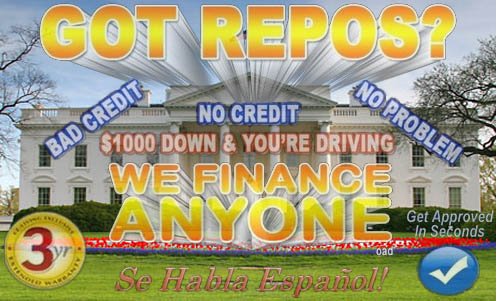 Will the bubble burst, and could it be prevented?
As long as the economic recovery continues and unemployment continues to drop, I don't think we'll see too much of a spike in auto repossessions.

However, the rise in subprime auto loans and their high LTVs is creating a very delicate economic situation. If unemployment spikes or the economy goes south, auto lenders and those investors who are buying subprime auto loans could see a massive increase in defaults, which could lead to catastrophic losses.

Considering that the average auto loan charge-off is more than $8,000, and that much of this amount can't be recovered by selling the cars, even a 1% spike in the repossession rate of low-credit borrowers would mean more than $1.5 billion in charge-offs, and hundreds of millions in net losses.

Of course, this can be prevented by simply not extending credit to buyers below a certain credit score (unlikely to happen), or by requiring substantial down payments before lending to subprime borrowers. This would create much lower LTV ratios and protect the lenders by allowing them to sell the car to recoup losses in the event of a rise in defaults. The question is: Will something change before it's too late, or will lenders wait to change the standards until after the bubble bursts?

Will a Different Type of Loan Cause the Next Financial Crisis? @themotleyfool #stocks Next Article
Current