What: Shares of Rackspace Hosting (NYSE:RAX) have lost 16% of their value Wednesday after the company decided against selling itself to the highest bidder Tuesday night.

So what: Rackspace had been engaged in a "strategic review process" since May that had focused on the potential for a buyout from one of several potential large but unnamed companies. Its initial announcement led to a major pop, and after returning to trend over the summer, Rackspace's shares surged again as the review process came to a close and analysts and investors prepared for the possibility of a buyout: 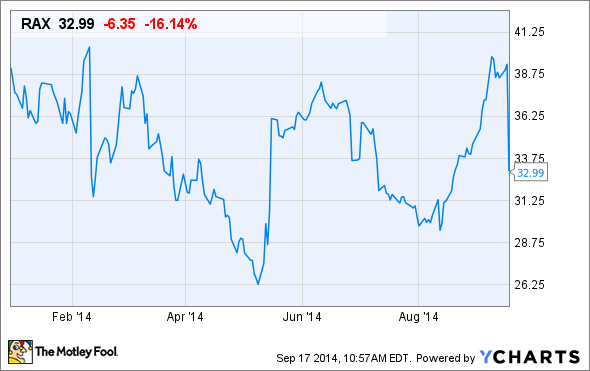 Wednesday's announcement scuttles hopes for a sale of the pricey cloud-hosting company, which remains at a P/E of 56 after the big drop. The company also shuffled its executive suite: Former CEO and co-founder Graham Weston will become non-executive chairman, while company president Taylor Rhodes will step into the CEO role.

Now what: A buyout might have been investors' best hope for further gains on their Rackspace shares, which have fallen far from an early 2013 all-time peak and are now trading nearly 40% lower for the past 52 weeks. Rackspace's fundamental growth has cratered in recent years, with quarterly EPS declining year over year for each of the past four quarters even as revenue continues to rise (albeit at a slower rate). Rackspace's free cash flow has also been weak over the past few quarters, and its price-to-free-cash-flow ratio is, at 74, significantly higher than its P/E. Cloud-based hosting will only become more competitive over time as huge tech companies swarm the field, which makes it less likely that Rackspace will return to the heady growth that typified its earlier years. Investors may want to watch this one from the sidelines for a while.