Putting two legendary characters into the same movie is no guarantee of franchise success. 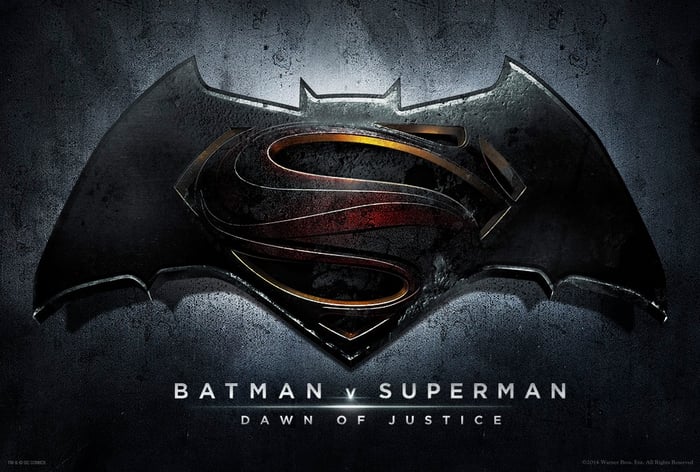 Batman vs. Superman may not be the movie some think it is. Source: Warner Bros.

Make no mistake. Executives are betting that Batman vs. Superman: Dawn of Justice can be for Time Warner, Inc. (TWX) what Marvel's The Avengers was for Disney (DIS 3.29%).

And why not? Thanks to The Avengers, Marvel movies possess a magnetic brand audiences are finding tough to resist. All four of the films to follow it have earned at least $600 million at the worldwide box office. Mixing in tens of millions in DVD, Blu-ray, and download sales has to make this one of the most profitable film franchises in Disney history. Of course Warner wants that sort of action.

But can Batman vs. Superman deliver as The Avengers did? Everything depends on how well the final product resonates with audiences, and given history and Warner's strategy, an Avengers-sized win is anything but assured. Here are five things you might not know about Batman vs. Superman: Dawn of Justice.

1. This movie will make money whether you show up or not. Remember the concerns over Warner's soaring budget for Man of Steel? Turns out they were unfounded, but not because of the box office gross. According to reporting by U.K. newspaper The Independent, Warner covered $170 million of the film's reported $225 million production costs with product placement. It's a fair bet that Batman vs. Superman: Dawn of Justice will employ a similar strategy, ensuring a low hurdle to earning profits.

2. The Justice League will come to TV first. The CW hit Arrow has introduced more DC Comics characters in two seasons than Warner Bros. Studios has introduced in over three decades of making comic book films. Green Arrow, Black Canary, Deadshot, Merlyn, Deathstroke... the list goes on. Now that The Flash is coming to The CW this fall -- and with him, DC superheroes The Atom and Firestorm -- it seems likely that some form of the Justice League will show up on TV before director Zack Snyder has a chance to bring his own interpretation to the big screen.

Arrow and The Flash will air on back-to-back nights this fall on The CW. Source: The CW.

3. Warner and DC don't want this to feel like a comic book movie. When Snyder first spoke of his plan for Man of Steel, he made clear that his intention was to make a more serious film. Critics didn't like that and pummeled Man of Steel with poor reviews. Don't expect that to influence Snyder's decisions with Batman vs. Superman: Dawn of Justice. Reports are that Warner wants to continue with a somber tone in order to differentiate DC movies from their more fun-loving Marvel counterparts. That the studio hasn't said much in response suggests that executives aim to preserve hope that Batman vs. Superman will be more light-hearted than its predecessor, even if it isn't.

4. Both Batman and Superman have failed at the box office in years past. We often forget that Christopher Nolan helped resurrect the Batman film franchise eight years after it had been all but buried by the 1997 flop, Batman and Robin. Before that, Superman III and Superman IV: The Quest for Peace tarred Christopher Reeve's otherwise acclaimed run as the Man of the Steel. Both films suffered terrible reviews and lackluster box office results. Putting the "World's Finest" heroes together in a film doesn't guarantee success.

5. Batman vs. Superman isn't really about Batman or Superman. Rather, Snyder is using Batman vs. Superman: Dawn of Justice as a staging ground for new characters. Gal Gadot will appear as Wonder Woman. Ray Fisher will appear as Cyborg. Jason Momoa is rumored to appear as Aquaman. Warner is betting that those who aren't in-the-know fans will show up to see Batman and Superman, and then become interested in other characters. A risky but appropriate strategy given that Warner badly needs new cinematic franchises, and studio boss Kevin Tsujihara has made clear that DC characters are some of its main go-tos.

"We have Batman vs. Superman coming out in [2016], but there's going to be, in the coming months, a lot of announcements regarding ... the future movies, television, games, and consumer products that are going to be coming from DC," Tsujihara said at a Sept. 2013 investor conference. He also noted that DC Comics properties would form the "foundation" of the studio's proposed slate of 12-14 new films a year. Batman vs. Superman: Dawn of Justice begins that process.

Now it's your turn to weigh in. Do you like Warner's chances of outperforming with Batman vs. Superman: Dawn of Justice? Does the strategy make you more or less confident as an investor? Leave a comment below to let us know what you think.