With thousands of commercial jet orders waiting to be filled, Boeing (BA) should have no problem sustaining growth for years to come.

Every company has one number that defines its success more than any other. For aviation leader Boeing (BA 2.01%), that number is ...

This is the number of commercial aircraft Boeing's customers have ordered, but which Boeing has yet to build and deliver. To put that in perspective, Boeing has estimated that there were 20,910 commercial aircraft in service at the end of 2013 -- Boeing's unfilled orders would replace or augment more than a quarter of the entire global commercial aircraft fleet. Boeing has a huge military-contracting arm, but this segment has become less and less important over time as the company's revenue mix has tilted toward commercial aviation:

Source: Boeing. Percentages may not equal 100% due to other segment contributions.

The shift from a military focus to a commercial focus has been easy to see over the past decade, as Boeing's commercial segment and its defense segment have swung from a 40%-60% revenue split to a 60%-40% split. Without a 166% increase in commercial aviation revenue, Boeing would have barely progressed at all in the past ten years, as its military revenue is up a mere 8%. In real terms, Boeing's defense segment has actually gotten smaller.

Now that we understand why Boeing's backlog of 5,540 jets is the key to its future, let's take a look at the mix of jets in that big backlog, and how much each jet is worth to Boeing's eventual bottom line:

This sum is quite a bit higher than the $376.3 billion commercial jet backlog Boeing reported during the second quarter, but Boeing's conservative accounting excludes purchase options and orders that have not yet been executed by contract. There are bound to be some cancellations before Boeing can finish manufacturing this monster jet fleet -- there have been roughly 100 cancellations to orders made in each of the past five years (last year's orders saw nearly 200 cancellations) -- but the trend has generally been toward an ever-larger backlog, year after year: 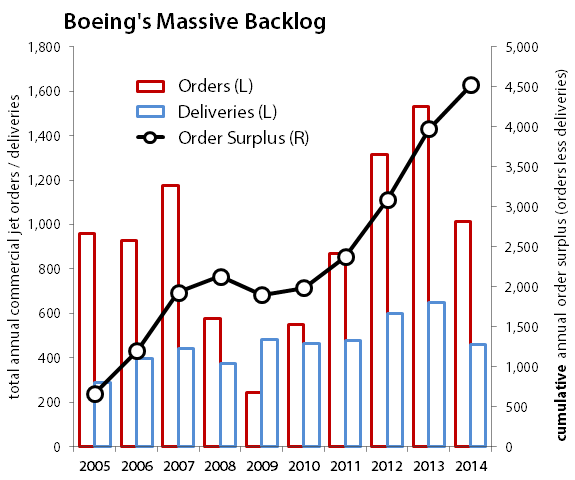 Source: Boeing. Orders and deliveries for 2014 are current to end of August.

Boeing has added an average of nearly 500 jets (473, when 2014's current results are annualized) to its backlog each year for the past ten years. At this rate, Boeing's backlog will rise from 5,540 jets to surpass 10,000 jets around 2024, if it doesn't add any new manufacturing capacity. However, the company has managed to increase its manufacturing output from 285 jets in 2004 to 648 jets last year -- it's bound to continue ramping up its capacity to meet the surging demand for its aircraft.

To keep up with this demand, Boeing may need to manufacture at least 800 jets a year. Boeing's manufacturing capacity has ramped up in stages, with deliveries up by 25% to 35% in 2006, 2009, and 2012, followed by two years of roughly equal deliveries in the intervening years. That might mean that Boeing could reach 800 annual deliveries next year or in 2016, if it can boost its capacity at similar rates to 2006, 2009, and 2012. Boeing investors should watch Boeing's regular updates to orders and deliveries closely -- the company's future depends on its ability to work through more of its massive backlog with every passing year.