Understanding what could derail the long-term investment thesis for 3D Systems.

Although investing in 3D Systems (NYSE: DDD) may offer tremendous long-term potential for investors, it certainly isn't a risk-free investment. The 3D printing company has recently had a difficult time pleasing investors, and shares are down more than 70% since the start of 2014. Although a 70% discount on shares may sound too tempting to pass up for some, investors should first consider some of the biggest risks that could potentially threaten 3D Systems' underlying business -- and keep its corresponding stock price from recovering or cause it to fall further.

1. Its aggressive acquisition strategy could become an operational nightmare

In the last three years, 3D Systems has made approximately 50 acquisitions aimed at bolstering its 3D printing portfolio and expanding its market opportunity across its consumer, professional, and industrial product and service lines. Considering the worldwide 3D printing industry is expected to grow by more than 30% per year through 2020, it's not such an unreasonable strategy for 3D Systems to aggressively pursue its market opportunity through lots of acquisitions.

However, in practice, a hyperaggressive acquisition strategy could yield an undesirable outcome, as integrating 50 businesses into one streamlined entity may prove to be an operational nightmare, plagued with inefficiencies and friction. The problem could further compound if 3D Systems' management expected to earn a stronger return on investment from underperforming acquisitions, leading to future writedowns that negatively impact future earnings.

Thanks to its aggressive acquisition strategy, 3D Systems has amassed more than $589 million in goodwill and nearly $252 million in intangible assets on its balance sheet as of its 2015 first quarter. In other words, future writedowns related to underperforming acquisitions that are charged against earnings could be quite burdensome.

With seven distinct 3D printing technologies, 3D Systems has the most diversified 3D printing technology portfolio in the industry, which gives it the opportunity to cater to more applications than competitors, because different technologies are often best suited for specific 3D printing applications. For instance, the technology to metal-3D-print jet engine fuel nozzles dramatically differs from the technology to 3D-print a multi-material model of a person's tumor and surrounding tissue that doctors could use to rehearse a difficult surgery.

While the number of 3D printing technologies 3D Systems offers is often viewed as a competitive advantage in terms of its market opportunity, it can also be viewed as a burden in the form of future research and development expenses.

As you can imagine, this could lead to outsize R&D obligations for 3D Systems relative to the competition, and it could potentially cut into its overall profitability. 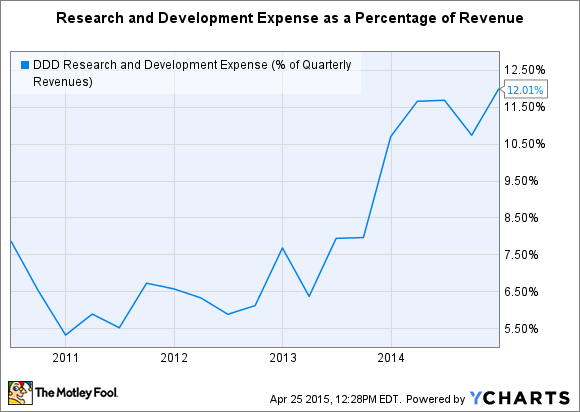 3. Future pricing pressures could be significant

Within the last couple of years, a series of patents related to 3D Systems' stereolithography and selective laser sintering 3D printing technologies have expired, and have opened up the market to new competition -- which appear willing to accept a lower profit.

Consequently, 3D printing technologies that 3D Systems typically reserved for its high-end portfolio are now being offered by competitors at a fraction of what 3D Systems charges. Although it's still too early to know the direct impact expiring patents will ultimately have on 3D Systems' underlying business, it may put unwanted pricing pressure on 3D Systems' stereolithography and selective laser sintering technologies. Depending on how severe these pressures become, it could even negatively impact 3D Systems' top- and bottom-line results in a meaningful way.

Although a 70% sell-off since the start of 2014 could potentially represent a buying opportunity for long-term-focused and extremely risk-tolerant investors, the purpose of this exercise is to understand some of the major risks that could materially impact 3D Systems' long-term investment thesis going forward. As an investor, it's important to monitor whether these potential risks materialize enough that it negatively impacts the underlying business and warrants selling shares.