Even though shares of Transocean (RIG -0.14%) at today's prices offer a dividend yield of greater than 9.5%, just about every analyst out there is saying "don't touch." In the past three months alone, Transocean's stock has dropped over 29%, and many say that still doesn't make the company an attractive buy. To a long-term value investor, though, the time to buy might be when the company is out of favor. With that in mind, let's see why so many people are negative about the outlook for this offshore drilling contractor and whether cheap prices today could translate into high returns down the road. 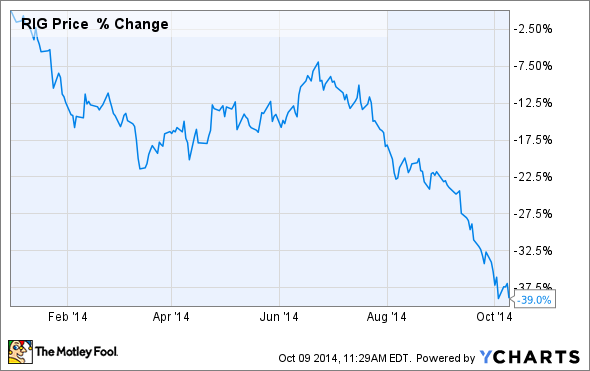 How cheap is cheap?
We can use a number of different financial ratios to evaluate stocks, but many are either unhelpful because they are limited in scope or irrelevant because they don't apply well to a certain industry. In the case of rig companies like Transocean, two key ratios are total enterprise value-to-EBITDA and price-to-tangible book value.

We need to keep these numbers in perspective because a company or an entire industry can trade at a valuation very different from the broader market. So we'll look at the valuation of Transocean and its peers today compared to their 10-year historical average.

Note: Seadrill has only been public since 2005, so historical averages for it are only 9 years. Source: S&P Cap IQ.

You don't have to look too hard to see that Transocean and its peers are trading very significant discounts to their averages. To be fair, though, these averages consider the peak oil media frenzy of 2005-2007 when oil prices were touching north of $150 a barrel. So those historical averages can be a little high. Still, these numbers indicate Transocean is extremely cheap.

Why all the hate?
Part of the reason the stock is so cheap today is because many analysts have been quite negative about the company's outlook for the rest of this year and into 2015. Every analyst rating in the past 18 months has been a downgrade, and a majority of analysts have either hold or sell ratings on the stock.

Now, most analyst calls are based on earnings for a couple quarters, potentially a year at best, so long-term investors must take these numbers with a grain of salt. However, the age of its fleet could leave Transocean struggling over the next year or two, if not longer. Transocean has many older drill rigs that aren't capable of handling deeper waters and more complex drilling tasks, and newer rigs being brought on by the company and its competitors could push these older rigs out of the running for contracts. If this were to happen, which is likely unless demand for drilling spikes dramatically, then many of Transocean's assets would need to be retired, so perhaps its book value isn't what the balance sheet indicates today.

What a Fool believes
At today's prices, though, long-term investors could do pretty well for themselves in the rig market. Personally, Transocean is probably cheap enough for a long-term investor to sit on for several years and eke out a return through its dividend. However, if I'm going to pick a company to dance with in the rig market today, I would lean toward Seadrill or Ensco. Both companies have a much more attractive fleet that will last longer, and will more likely earn the few contracts out there in the downtime while Transocean's rigs could sit in the dockyards.