Please ensure Javascript is enabled for purposes of website accessibility
Log In Help Join The Motley Fool
Free Article Join Over 1 Million Premium Members And Get More In-Depth Stock Guidance and Research
By Morgan Housel - Oct 10, 2014 at 11:33AM

Dividends are on fire.

The S&P 500 has doubled in the last five years. That's huge. Historically, it takes an average of 10 years to earn those kind of returns.

Such a big run has many people calling this market a bubble.

But there's another bull market that hasn't gotten enough attention. Check it out:

One of the only things that grew faster than the S&P 500 over the last five years are S&P 500 dividends.

My friend Eddy Elfenbein pointed this out last week:

Dividends have grown by more than 10% for 14 of the last 15 quarters. The only exception was the fourth quarter of last year, and that's because the fourth quarter of 2012 had been unusually strong (+22.77%) so investors could take advantage of the new tax laws. Dividends for Q3 are up more than 77% from the third quarter of 2010 while the index is up by 73%. Yes, the dividend yield is slightly higher than what it was four years ago. Some bubble.

Even though the S&P has nearly doubled since late 2009, the dividend yield is actually higher today than it was back then.

As Warren Buffett says: "Price is what you pay, value is what you get." The S&P's price has doubled over the last five years. But its value -- in terms of dividends -- is pretty much the same.

That wasn't the case in the 1990s, when stocks were rising much faster than dividends. Eddy made this great chart, which I think is one of the most important charts of the recent bull market: 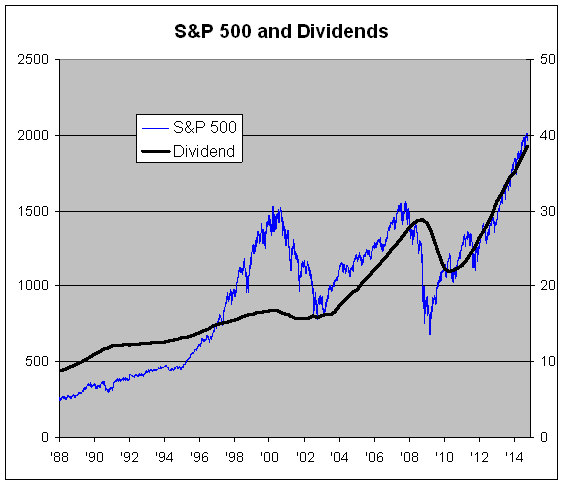 Before we start calling this market a bubble, we have to acknowledge that real, tangible things that create value have improved at the same rate that the market has increased.

That's really important, because it means companies can raise dividends faster than earnings are growing without breaking any historical precedents. If earnings grow 5% a year for the next 10 years, companies could grow dividends by 10% a year and still have below-average payout ratios.

Share buybacks have also boomed over the last few years.

S&P companies bought back more than half a trillion dollars worth of their shares in the year ended July 31, versus $201 billion during the same period in 2010, according to FactSet.

That's awful timing -- the last thing you want to see are companies doubling down on buybacks after shares surged. And a portion of share buybacks don't actually benefit investors; they're just mopping up new-share issuance tied to management compensation.

But poorly timed or not, buybacks do create value. One-in-five S&P 500 companies reduced their shares outstanding by 4% or more during the first six months of the year, according to Standard & Poor's.

That's a real return to shareholders. It can't be ignored.

This doesn't tell us anything about where the market might go next. Dividends and buybacks were high in 2007, and stocks fell 50% without flinching. That could happen again. Anything could happen again, and I'm skeptical that any metrics tell us what stocks might do next.

But a bubble is something that rises so high that you can't possibly justify its value. I don't think that's the case with most stocks these days. Dividends are the most tangible shareholder returns that exist. They're also one of the only things keeping pace with this market.

For more on this topic: