Memory chip giant Micron Technology has been crushing the market since the game-changing Elpida acquisition in 2013. But why did the stock plunge 20% in two weeks?

Micron Technology (MU -2.45%) is not a stock for weak stomachs. Shares of the computer memory chip maker recently doubled year over year -- only to drop back by 21% in about two weeks.

The stock is back to prices not seen since the end of May. Micron's stock is still beating the S&P 500 market index over the last 52 weeks, but by a smaller margin. So what's the deal with this roller-coaster experience?

Going up...
The story behind Micron's rising shares is quite simple. The memory market has boiled down to just a handful of serious players after a series of buyouts and bankruptcies, and Micron is one of the largest pure-play memory chip specialists left standing.

All-around tech giant Samsung (NASDAQOTH: SSNLF) leads the field with a nearly 40% share in some key markets. In these areas, Micron and SK Hynix go neck-and-neck in a battle for second place, each holding global market shares in the mid-20% range.

But then, Samsung doesn't try to make a profit on memory chips. The South Korean giant has far bigger fish to fry, and can afford to sell memory chips at a microscopic profit or even a loss. Samsung's own smartphone and consumer electronics departments absorb much of the memory product flow, after all. It doesn't make sense to charge high component prices when the customer is part of the same company.

Micron, on the other hand, lives and dies by its memory business. That's why the 2013 acquisition of bankrupt rival Elpida was such a game changer for the company. Thanks to that transaction, Micron now holds a very significant slice of the global memory market, and can play games with the economies of scale that follow.

And that's exactly what Micron has done. The company revamped some of Elpida's commodity-level production lines to focus on more profitable specialty products. At the same time, the reduced overall production stabilized memory prices across the board.

For example, Micron is now the No. 1 supplier of memory chips to the automotive industry. Thanks to Elpida's mobile memory heft, Micron also owns 40% of the mobile DRAM space. As cars grow ever more digital, with self-driving autos on the far horizon, the need for memory chips and other electronic components will only grow for years to come.

So thanks to the Elpida deal, Micron's sales are soaring while margins expand. That's a fantastic combination, leading to a huge cash flow: 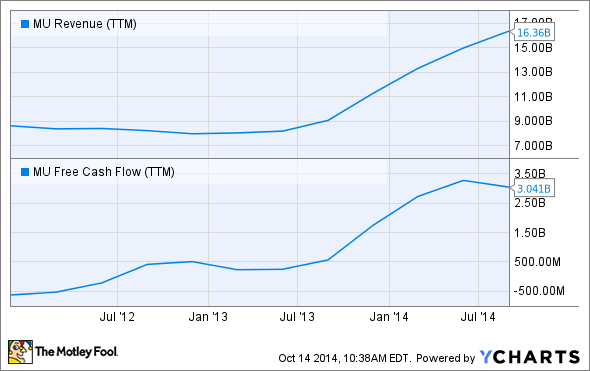 That's why, in a nutshell, Micron shares have soared in 2014. The company's management plays the supply-and-demand game like Joshua Bell plays his Stradivarius. I mean, it's a beautiful thing.

What about the big drop, then?
So why have Micron's shares plunged more than 20% lower in the last two weeks?

I think it's a big misunderstanding. And I'm not alone.

When Micron reported fourth-quarter results three weeks ago, the stock jumped more than 6% higher overnight. Micron impressed on all counts, matching analyst-beating results with strong forward guidance. Micron CEO Mark Durcan boiled it down to "continued favorable market conditions and steady execution," which is what I've been talking about today. That's the real story here.

But then fellow chipmaker Microchip Technologies (MCHP -1.21%) reported a revenue miss and issued a dire warning.

"Microchip often sees the turn of the industry ahead of others in the semiconductor industry," said Microchip CEO Steve Sanghi. "We believe that another industry correction has begun and that this correction will be seen more broadly across the industry in the near future."

Investors hung on Sanghi's every word, and semiconductor stocks of all kinds plunged the next day. Micron shares fell more than 9%.

All of this makes sense if you can approach every semiconductor company from the same angle. But that's not the case at all.

Summit Research analyst Srini Sundararajan immediately shouted "apples and oranges!" from the rooftops. Microchip mainly works with low-margin commodity products, which is exactly the type of business that Micron is distancing itself from.

In short, Micron shares got a haircut because an unrelated business had a bad hair day. Moreover, Micron shares were cheap before the 20% slide, and now trade at just 6.7 times forward earnings.

Micron's price management tools are easy to understand, and yet Mr. Market tends to misread the company's market position anyhow. What we see today is a big discount on a high-quality stock, and I'm tempted to buy some more Micron shares while the mismatch lasts.