Solazyme has the potential to become an incredible growth stock, but recent developments may not inspire investors. The numbers tell an important story -- and it doesn't necessarily hinge on profitability.

Replacing less efficient and less sustainable petroleum and agricultural oils with renewable oils produced efficiently from algae is a pretty disruptive idea. Think about the implications. We wouldn't have to spend massive amounts of capital discovering and pumping dinosaur sauce out of the ground nor months tending crops in vast fields. We could simply create the perfect growth environment for microbial cells in a fermentation tank and harvest oils in a few weeks.

Of course, the road to success is often more chaotic than most people imagine. Investors hoping to tap into the amazing growth story of Solazyme (TVIA) have received quite the gut check in 2014. Shares are down over 40%, while the company's market cap has been slashed by one-third. 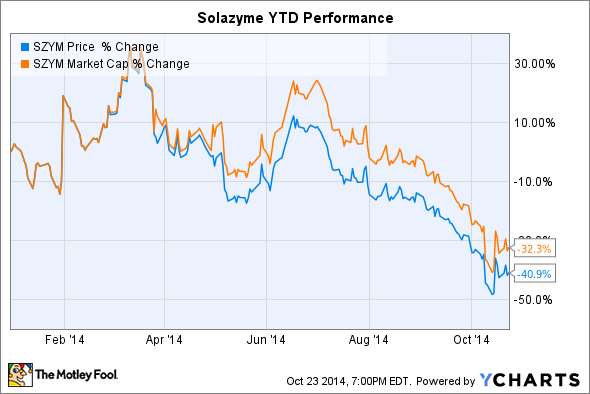 The stock has multiple catalysts that could be unleashed in the next several months or quarters on the way to a speedy recovery. However, it's a good idea to temper any expectations for profitability in the near term and consider more realistic market valuations. Let's walk through an optimistic scenario of the company's revenue and profit potential for the year ending December 31, 2016 to help frame the discussion of Solazyme's growth trajectory.

What is Solazyme's revenue potential?
To answer this question investors need to know two things:

This brings us closer to our answer. Solazyme could sell roughly 122,000 MT of renewable oils in 2016 for an average selling price of 2,000 per MT; representing $244 million in product revenue from existing facilities. However, we must also incorporate high-value cosmetic ingredients, which are produced with third-party manufacturers. Let's be optimistic and assume successful Algenist expansion doubles the brand's annual revenue to $50 million in 2016, which pushes total product revenue potential to $294 million.

We'll take it one step further and assume Solazyme decides to initiate the next phase of expansion at Clinton in early 2016. To recap, Phase 1 (current) boasts 20,000 MT of annual capacity, Phase 2 grows that to a total of 40,000 MT, and Phase 3 expands to an annual capacity of 100,000 MT. Initiating Phase 2 would allow the company to produce more oils, but the additional 20,000 MT of capacity won't be operational in its entirety during the first year (ramp-up). So let's optimistically assume an additional 10,000 MT of renewable oils are produced at Clinton in 2016, which brings total product revenue potential to $314 million.

What is Solazyme's profit potential?
Solazyme has historically stated that it expects to realize attractive gross margins in various markets. Here are the previously reported targets and how each segment will contribute to the companywide average in 2016, weighted by volume of product sold:

It's important to remember that target gross margins will be met when each facility is optimized, which doesn't necessarily occur when ramp-up ends and steady state operation commences. Additionally, Solazyme's first two facilities aren't created equally. Clinton currently uses fermentation tanks that are roughly 500,000 liters in volume, while Moema uses fermentation tanks weighing in at 625,000 liters. The difference in tank volumes will result in lower gross margins for renewable oils produced at Clinton -- and likely be below targets. Clinton also sends pre-finished renewable oil products a few hundred miles away for processing and finishing, which adds an extra cost to production, while Moema incorporates downstream processing on site.

However, collaboration revenue from partners will represent an additional revenue stream that offsets research and development costs. Let's assume partners contribute an additional $10 million per quarter in 2016 (they provided $6.9 million in 2Q14), which lowers annual operating expenses for Solazyme to an adjusted figure of $140 million.

We now have the key numbers needed to estimate Solazyme's profit potential in 2016. We've estimated that the company will realize $314 million in total product revenue and $140 million in adjusted operating expenses. Here's a table of companywide product gross margins and the profit potential of the company in 2016 using the numbers above:

This doesn't account for tax obligations, but accumulated deficits can be applied to lower or eliminate the burden. Nonetheless, investors can see that it will be difficult for Solazyme to be profitable with current facilities and production capacity alone.

What is Solazyme worth?
While investors strive to own profitable companies, operating income isn't the only thing that contributes to a company's market valuation. Even though Solazyme will have a difficult time covering operating expenses with current capacity in 2016, it's more important to prove that it can optimize operations at a fully integrated commercial scale manufacturing facility. After that occurs, customers and feedstock suppliers will no longer question the ability to reliably produce renewable oils and capacity expansion (building new facilities) will accelerate greatly.

There are some questions about delays at Moema, but I don't think the delays mean Solazyme's technology platform will never work. However, I also don't think the tipping point investors are waiting for is the announcement that Moema is on track, but rather the longer-term milestone that Solazyme can reliably produce renewable oils and realize attractive gross margins. If the path to profitable expansion is visible and market development (and other unforeseen) obstacles are addressed, then Solazyme shares could really take off as investors envision. It may simply take a little longer to get there than currently expected.

TerraVia Is Falling 12% as Investors Lose Patience After Earnings
413%