Despite the weakness in oil prices, the offshore drilling industry has enjoyed significant success over the past few weeks. Two weeks ago, Big Oil announced a gusher of new discoveries, and last week a stampede of new investments was announced in the Gulf of Mexico. Unfortunately, this week's news shows that the storms in the market aren't yet over as drillers announced rig delays, dry holes, and layoffs. Let's look at the news moving the offshore drilling industry this week.

Pausing new deliveries
Atwood Oceanics
(NYSE:ATW) filed its fleet status report this week, and unexpectedly announced that it would postpone the delivery of two newbuild vessels. The Atwood Admiral now won't be delivered until September of next year, while the Atwood Archer is delayed until June 2016. As the following slide notes, both rigs were expected to be delivered next year. 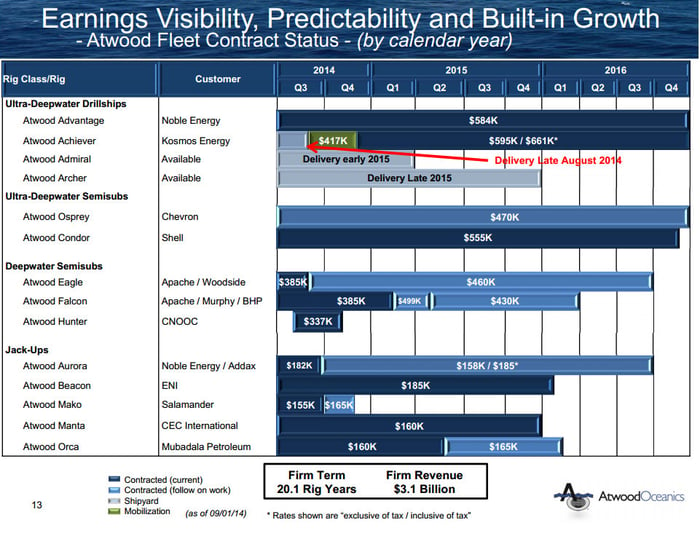 The delivery dates noted on that slide show the company is postponing each delivery by about six months. Given that neither rig is under contract, the postponement buys the company some additional time to get these rigs under contract, preferably after dayrates head higher again. It's also important to note that Atwood isn't the first company to delay the delivery of newbuilds -- more contract drillers are exploring this option to ease the pressure to sign contracts at less than ideal dayrates.

Hercules hands out pink slips
The downturn in the offshore rig market isn't just delaying rigs; some are being shut down altogether, and that is leading to job losses. Hercules Offshore (NASDAQ:HERO.DL) told regulators this week that it will lay off 324 employees, or about 15% of its workforce. The layoffs are coming as the company shuts down four rigs in the Gulf of Mexico amid a downturn in the market that is starting to have a big impact on rig use and dayrates. Dayrates have plunged 30% in recent months, while utilization in the domestic offshore market fell from 91% in the third quarter of 2013 to just 68% in this year's third quarter.

Hercules is trying to stay ahead of the game by stacking rigs. The company, which lost $88.6 million last quarter, needs to cut costs to stay afloat while the rig market corrects.

Offshore drilling in Angola comes up dry
One reason the rig market is weak is because offshore drilling isn't yielding compelling economics these days. Skyrocketing costs and a number of dry holes are causing oil companies to reevaluate offshore projects. ConocoPhillips (NYSE:COP) has had particularly mixed offshore drilling success this year. While the company recently announced an oil discovery offshore Senegal, it also gave up on a discovery in the Gulf of Mexico. The company noted that an appraisal of the Coronado prospect in the Gulf was disappointing; ConocoPhillips thus decided to end its association with the project and expense the well as a dry hole. Just a few days later, the company announced that it had encountered another dry hole, this time offshore Angola.

The company's Kamoxi-1 exploration well was drilled to a total depth of 22,660 feet, but it didn't find commercial hydrocarbons, so it will be plugged and abandoned. The company will then have to take an after-tax charge of $140 million. ConocoPhillips had expected a bright future in Angola as it sees the subsalt being analogous to Brazil's Santos and Campos basins. Furthermore, ConocoPhillips' exploration blocks are adjacent to several recent discoveries, as shown on the following slide.

While the dry hole is a disappointment, the company has another wildcat well being drilled in Block 37. The hope is that the company will strike oil at that well, which would more than make up for its recent string of dry exploration holes.

The energy industry is known for cyclicality, and right now it's in the middle of a downturn, especially offshore. This is forcing companies to take action to preserve cash flow, including delaying rigs, laying off employees, and quickly giving up on less promising prospects. However, given the world's need for oil, this storm will eventually pass, and when it does the offshore drilling industry will be ready to ramp up and produce the gushing profits investors have come to expect.