It was all about the spinoff plan on Prospect Capital Corporation's (NASDAQ:PSEC) latest quarterly conference call. In an effort to juice its share price, the company will spin off and separate its collateralized loan obligations, real estate investments, and peer-to-peer loans into new publicly traded structures.

Here's what you should know now.

Why the spin?
Every single one of the assets named for the spinoff is non-qualifying under its current structure. Thus, they have to be held within Prospect Capital's "30% bucket," held to no more than 30% of the company's total asset value.

Combined, the REITs, CLOs, and P2P loans make up about 26% of the company's asset base. The company cannot make significant new investments in these business lines without growing its other, qualifying assets.

Prospect sees that as a bit of a hindrance. CLOs and P2P loans are reportedly spinning off cash returns nearing 20% per year, well in excess of returns it earns in its "qualifying bucket" of assets. 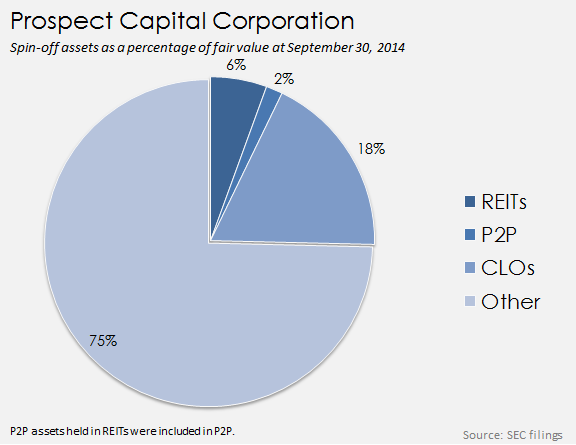 Creating shareholder value
Prospect Capital trades well below its last reported net asset value (book value) of $10.47 per share. Its managers suggest the reason may be the complicated nature of having REITs, CLOs, and P2P loans all piled up into one company.

By spinning off these assets into "pure-play" companies, Prospect hopes each segment will trade at a higher multiple than they do in their current structure as Prospect Capital Corporation. It seems logical, but I think you really have to question the accuracy of some of their assumptions.

Secondly, Prospect COO Grier Eliasek indirectly and inaccurately compared Prospect Capital's P2P business to that of LendingClub and other leading originators. He noted that many firms in the space were valued as high as 100 times book value. LendingClub fits that valuation parameter, but it is valued so highly because it doesn't invest its own capital in loans; it originates and services them for a fee.

Let's be frank: Prospect Capital's P2P "business" isn't really a business at all. It's just a combination of about $103 million of loans it purchased off someone else's P2P platform. It's a low return on asset loan book, making it very different from the high return on asset business of originating and servicing loans. So, suggesting that it deserves a larger multiple because of a somewhat-related-but-not-really-related business is a stretch at best.

I am willing to concede, however, that spinning off its REITs is probably a good idea. REITs generally enjoy much lower costs of capital than BDCs, and I find it increasingly hard to believe its apartment buildings and storage facilities generate a sufficient return to cover the company's required returns.

What's this really about?
After hearing the conference call, I can't help but think this spinoff suggestion is really for the benefit of the management team. Here's why.

First, John Barry let it slip that the spinoff might be done via a rights offering, in which shares of the spun-off companies are effectively sold to existing Prospect Capital shareholders. This would have the effect of raising new capital and spinning out assets, two goals Prospect Capital stated in its press release. It would also raise new sources of fee income for the external manager, assuming the spinoffs are managed by Prospect Capital Management.

Secondly, the spinoff gives the company a mechanism by which it can cloak a dividend cut after more than a year of failing to earn its dividend with net investment income.

By dividing the company into several different pieces, each with its own dividend distribution, it's very possible the sum of the dividends from all of the new companies will be lower than the current $0.11 distribution per Prospect Capital Corporation share.

While we'll have to wait for the full details of any spinoff, the initial information we have now gives me little hope that this will rectify Prospect Capital's low share price.