The dollar store chain racks up another quarter of growth as the $1 for everything price point resonates with a financially challenged customer. Photo: Flickr via Mike Mozart

Although deep discount variety store Dollar Tree (NASDAQ:DLTR) continues to see a drag on its performance from its pursuit of industry rival Family Dollar (NYSE:FDO.DL), the big takeaway from its third-quarter earnings results released this morning seems to be it's growing organically anyway.

Dollar Tree recorded a 5.9% jump in same-store sales for the period, the biggest increase it's seen in comps since 2011 and the 27th consecutive quarter it's reported positive sales, which suggests consumers continue to respond to the value proposition it offers.
Investors may just end up hoping Dollar General (NYSE:DG) is ultimately successfully with its competing bid for their discounting peer.
With the stronger performance, management raised its sales guidance for the full year, now forecasting sales between $8.52 billion and $8.58 billion compared to its previous expected range of $8.44 billion to $8.55 billion. It also narrowed its per-share profit forecast to between $2.97 and $3.04 from $2.94 to $3.06, but the current guidance includes $0.07 per share in acquisition-related costs whereas the prior estimate included just $0.02 per share.
The acquisition swiped almost $15 million from net income in the reported quarter, about 3.5% of its reported increase, but Dollar General confirmed it's "actively engaged" in discussions with the Federal Trade Commission over exactly what it would require it to divest to approve the hostile takeover. The New York Post had previously reported it may have to divest as many as 4,000 to have the deal approved.
Dollar Tree opened 117 stores and closed one store during the quarter, giving the deep discounter 5,282 stores in 48 states and five Canadian provinces. It's still the smallest of the three big dollar-store chains, but it remains the most profitable.
Adjusted operating margins improved to 11.2% from 10.8% last year, and from 10.5% in the second quarter. That's still better than the 9.1% Dollar General recorded last quarter and the 1.5% from Family Dollar. 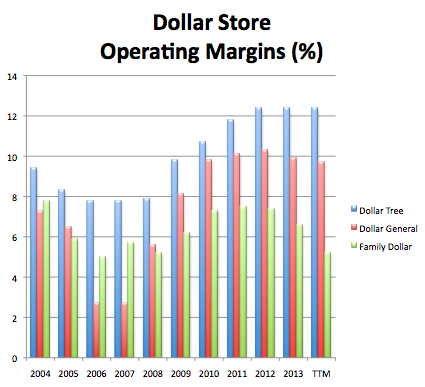 These gains came despite Dollar Tree adding freezers and coolers to more stores in the quarter; it now has 3,543 stores having refrigerators installed. Although they tend to be lower margin goods sold, they have a faster turnover and increase shopping frequency.
Moreover, Dollar Tree continues to roll out more name-brand goods to its shelves. These also eat away at margins, but it creates more value for its customers, giving them an incentive to return. That's evident in both the high comps numbers it posted, but also that its inventory turns increased as well. It also says it's gaining market share.
While the acquisition continues to occupy management's time, and there are issues out of its hands like the problems at California ports and the shortage of truck drivers that raises its freight expenses, Dollar Tree continues to execute on its plan and consumers are responding to it. It should also get a boost from lower gas prices that may be able to offset those higher costs.

Last quarter, I suggested management was being conservative with its guidance, but also that the pursuit of Family Dollar would likely weigh on results going forward. While both of those statements were borne out this quarter, the consumer response to Dollar Tree's core business outweighed those items and we see the improvements that made.

It's on track to exceed 1 billion transactions for the first time ever this year and with further expansion into Canada, where it believes it can grow to 1,000 stores (there are 225 there now), we'll be seeing that transactions number expanding exponentially in the future; it should increase whether it secures the Family Dollar acquisition or not.