Netflix (NASDAQ:NFLX) is both a market darling and a much-debated stock pick. The stock has gained nearly 500% over the past five years, but dropped more than 20% on five occasions along the way.

Where is the Netflix roller coaster going next? That's what we asked three Motley Fool contributors with long histories of covering Netflix, and here's what they said:

Andres Cardenal: If you are looking for a disruptive company with plenty of potential for growth in the long term, then Netflix is a top stock to buy. The company has the first-mover advantage in the much exciting online streaming industry, and it's getting stronger by the day as it continues building its library of content, which includes widely successful original productions such as House of Cards and Orange Is the New Black.

People around the world are spending an increasingly bigger share of their time online, connected via multiple devices and using several different screens, so online TV is rapidly gaining ground versus linear TV and other traditional media.

Netflix is at the same time a major driving force behind the online streaming revolution and one of the biggest beneficiaries from the emerging trend.

With more than 53 million members on a global scale as of the third quarter, Netflix has clearly gone through the inflection point, proving to both viewers and investors that the customer proposition is quite solid. Management expects to add 4 million members during the fourth quarter, so the company is still growing at an amazing speed.

Netflix has made its fair share of mistakes in the past, and investors in the company need to be prepared for substantial volatility, as is many times the case with innovative growth companies. On the other hand, the company offers a unique opportunity to profit from the rise of online TV over years to come.

Anders Bylund: Netflix is the single largest holding in my own investment portfolio, but I'll be the first to admit that it's not the perfect stock for every investor.

For me, Netflix is a window into the future of media and entertainment. The company is always two steps ahead of the competition in the new age of media distribution, and it's been like that since the launch of the original DVD mailer business. The medium has changed and Netflix now leans heavily on digital video streams, but the vision remains the same: Deliver great video content, in the least complicated way possible, whenever and wherever customers might want to consume it.

Treading a new path for others to follow is always a difficult task, and Netflix has run into its fair share of snags along the way. As a result, the stock chart is enough to make value investors break out in a cold sweat, reaching for their favorite antacids. If you can't afford the occasional large dip in share price, Netflix simply isn't the best stock for your portfolio. The sawtooth pattern will continue for years to come, as Netflix keeps delivering surprises to consumers and investors alike.

That being said, the same pattern also makes Netflix a perfect fit for opportunistic investors with a very long investment horizon.

Right now, Netflix shares are trading at a large discount thanks to soft subscriber growth in the third quarter. These are the dips that scare away value fanatics and short-term traders -- but also where patient investors who don't mind some volatility can pick up new Netflix shares for the long road ahead.

Tim Beyers: Netflix was the source of my first ever 10-bagger -- an investment that's risen 10 times above its original value. How did it happen? In May 2012 I announced plans to purchase a type of option called Long-Term Equity Anticipation Securities, or LEAPS, tied to Netflix stock with a contract expiring in January, 2014. Big subscriber gains followed, leading to this: 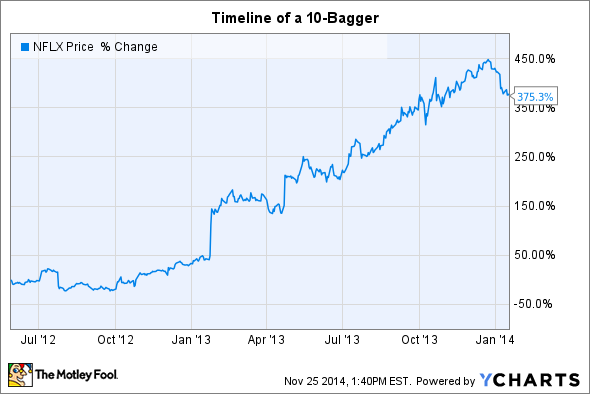 With those sorts of wide-eyed returns, you'd naturally be wondering if I think Netflix can do it again. My answer: of course, but probably not as fast as it did before.

The business is transitioning, taking on a worldwide market via an innovation I'm calling the global premiere. On top of the U.S., House of Cards could open in 13 European countries and parts of South America when it returns for season three, which could be as early as February. That's the sort of draw that could pull Netflix international streaming even with domestic as a revenue contributor. Right now, it accounts for just 28%, but there's a much larger potential market..

Add it up and I think it's fair to call Netflix a core holding for any investor who's interested in profiting from the tectonic shifts in the home entertainment business. But with the stock having moved so far, so fast, in such a short period of time -- and trading for a stratospheric 93 times earnings -- I'd also caution that it could take years for those who buy at today's levels to see a market-beating return on their investment dollars.