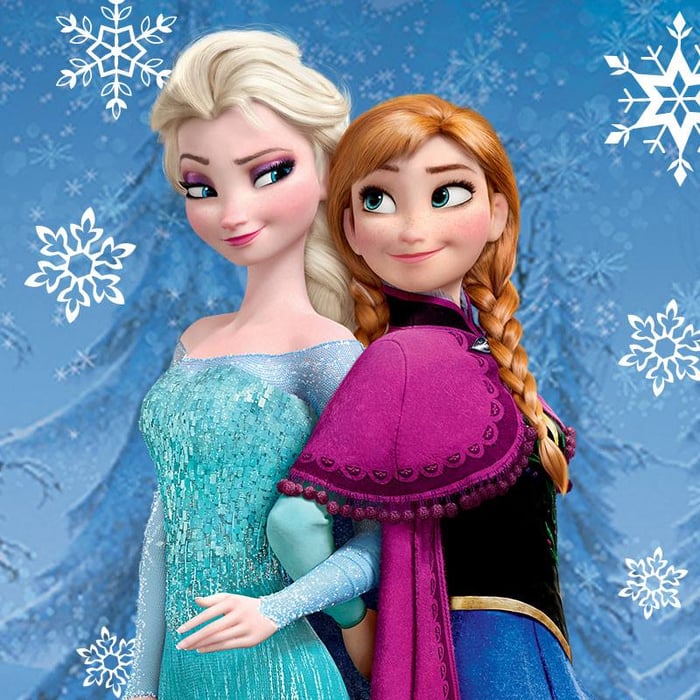 These sisters teamed up to topple the reigning queen of toys from her throne. Image: Disney.

Barbie is no longer the queen of the toy box. After reigning for 11 years as the No. 1 toy parents were buying for girls this Christmas, the icon of toymaker Mattel (MAT -0.69%) was dethroned in favor of a couple of princesses and a snowman.

The National Retail Federation says 20% of parents shopping for toys this holiday will be picking up toys based on the Disney (DIS -0.15%) hit Frozen. Sisters Anna and Elsa, and presumably Olaf, too, will be among those sought after this year. Less than 17% of the 6,593 consumers polled by the trade group picked the 50-year old diva.

But don't cry too much for Barbie. She still represents the single biggest doll brand parents want to buy. Where Frozen dolls are spread among several characters, Barbie still carries it all on her own. Yet as we'll see, there's little cold comfort found from that.

According to the NRF, this was the breakdown of the top five must-have toys this year:

Perhaps it shouldn't be so much of a surprise. Frozen has generated almost $1.3 billion in worldwide box office receipts for Disney with more than $400 million coming in the form of domestic receipts. It has quickly become the top-grossing animated film of all time.

But in a sign of the waning influence of Mattel to sell toys that matter, Disney yanked from it the designation of being the preferred licensor of Frozen toys and handed it to arch rival Hasbro (HAS -8.11%). Beginning in 2016 Hasbro will have the global rights to develop dolls based on Frozen and Disney's Princess characters, including Cinderella, Beauty and The Beast, and The Little Mermaid.

The girls category has become one of increasing importance to Hasbro. Third quarter sales in the division rose 5% to $408 million on the strength of perennial favorites My Little Pony and Littlest Pet Shop. The segment has grown to more than $1 billion over the past decade.

What might be surprising then is that My Little Pony only placed eighth on the NRF list, with just 2% of respondents saying they were seeking out the toys this Christmas. LEGO, which remains an evergreen favorite among boys -- it topped the list again on the boys side of the ledger this year -- placed higher (3%) with girls too.

Mattel has fought back against the negative archetype critics say Barbie has become: she's not quite as curvaceous as she was and she's now more than just Ken's elbow prop. She's a business woman too! Image: Mattel.

But there's a good reason why Anna and Elsa are popular. They represent strong female characters in the movie. Although outdoorsman Kristoff is a helping, supporting character, it is the two sisters who drive the story and bring about the resolution to the movie's conflicts. There's no Prince Charming to ride to the rescue. Yet the girls are not necessarily prissy princesses either.

This is a problem for the still-iconic Barbie. Worldwide gross sales for the doll were down 21% last quarter for Mattel even as other girls brands rose 1%, including those for Disney Princess, which were one of the primary reasons for the growth.

Sales of Barbie are in a secular decline. It's been years since the doll has seen any sustained growth, and now sales are falling at an accelerated rate. 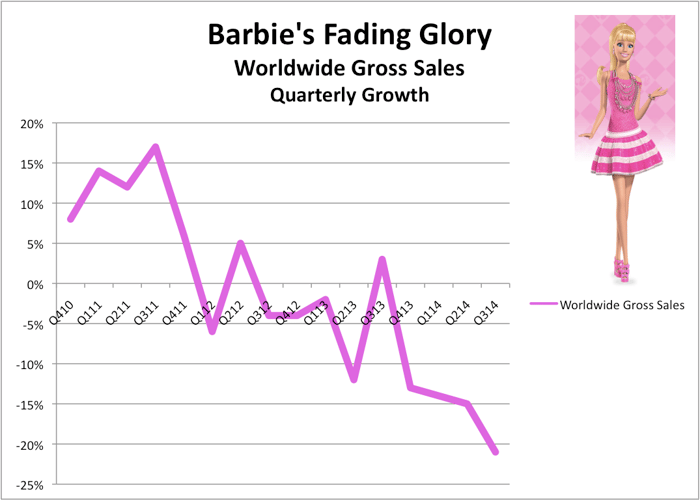 With Frozen toppling her from the roost she's ruled for years, the signs are ominous that Mattel has a difficult Christmas looming on its hands.

Although Mattel properties made three of the top five spots in the list --Barbie, American Girls, and Monster High -- sales have been falling for all of them. As noted, Barbie's been in freefall, but sales of American Girl dolls were down 7% last quarter from a year ago and Monster High slipped.

Whether Frozen has the staying power of Barbie seems doubtful. Being popular across five decades isn't easy. But with a Frozen 2 reportedly in the works, the time may be at hand at last that a new queen of the toy box is coronated.

Carvana Is Down 95% From Its High. Time to Buy?

Up Almost 300% So Far This Week, Is It Too Late to Buy BuzzFeed Stock?