Twitter (NYSE:TWTR) wants the world to notice its new media and e-commerce initiatives, which could help it generate more revenue. However, Twitter doesn't like discussing this major weakness -- the fact that many of its users are fake or bot accounts. 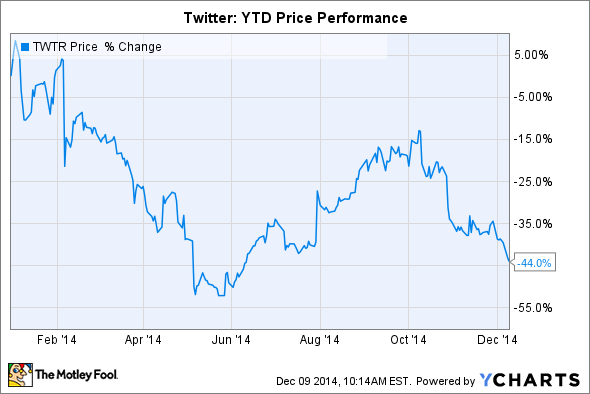 Prior to its IPO last year, Twitter admitted that 5% of its monthly active users (MAUs) were fake. At first, that sounded better than Facebook's admission that 5.5% to 11.2% of its accounts in 2013 were fake. Yet follow-up research published by NBC News indicated that closer to 10% of Twitter's accounts were fake.

In April, a report from Twopcharts revealed that 44% of Twitter's 974 million registered users had never tweeted, while 292 million of those accounts had only tweeted one to 10 times, and only 127 million had tweeted over a hundred times. That's significantly less than the 241 million MAUs Twitter reported at the end of 2013 and the 284 million MAUs reported at the end of last quarter.

Third party auditing tools saw similar trends. Twitter Audit reveals that only 62% of Lady Gaga and 49% of President Obama's followers are "real." The rest, presumably, are fake accounts and retweeting bots. This distortion could affect Twitter's clout with advertisers, who probably don't want their promoted tweets simply retweeted by bots to other bots.

Twitter: social network or social mirage?
A Twitter account is a virtual soapbox that gets taller with more followers. By comparison, Facebook is a closed network for family and friends that should be pruned from time to time.

Effective self-promotion on Twitter is tough without a strong following. No one follows a self-proclaimed "expert" in any field who only has a dozen followers. That's why companies started selling fake followers generated by computer algorithms. As of this writing, many sites are selling 50,000 fake followers for $500 while $20 gets you 1,000 fake followers.

Twitter doesn't seem concerned about these sites -- a popular one, Faketwitterfollowers.com, has been online since January 2013. And this grey market is thriving -- last year, Italian security researchers and bloggers Andrea Stroppa and Carla De Micheli estimated that sales of fake Twitter followers have raked in between $40 million and $360 million.

To be fair, Twitter has tried to curb the rise of fake followers by enforcing a 2,400 limit on daily tweets, a 1,000 cap on the number of people that one account can follow per day, and strict follower-to-following ratios for accounts following over 2,000 people. But in my opinion, these limits are fairly lenient and still allow fake accounts and bots to thrive.

That tolerance of retweeting bots could be intentional, since Twitter is paid by high frequency trading (HFT) firms and news agencies for a "firehose" feed that can deliver 400 million filtered tweets to their servers daily.

That growth seems robust, but Twitter acknowledges certain risks related to fake users in its 10-Q filing, including a decrease in the "size of our user base" and the "impact of fraudulent clicks or spam." Twitter also admits that spam could "diminish the user experience on our platform," "damage our reputation," and "deter our current and potential users from using our products and services."

Yet at the same time, Twitter sticks with its pre-IPO assertion that "less than 5%" of its MAUs are "false or spam" accounts. At no point in the filing does Twitter directly address the grey market for fake followers, its lenient follower and tweet limits, or how an MAU is determined to be real or not.

Should investors be worried?
In the past, Twitter stated that the majority of its ad revenue was generated on a "pay-for-performance" basis, meaning that "advertisers are only charged when a user engages with their ad." This insulates advertisers from bots, which usually aren't programmed to click through ads. But this also distorts Twitter's ARPU (average revenue per user), since it's unclear just how many users are real.

Based on Twitter's third quarter revenue of $361 million, Twitter's average revenue per MAU comes in at $1.27 per quarter. That's considerably lower than Facebook, which generated $2.37 per MAU last quarter. If more advertisers believe that Twitter's fake user percentage is actually higher than 5%, interest in advertising on Twitter could wane.

Fake users haven't become a massive problem for the company yet, but it's one that investors should keep an eye on. In the meantime, audit your own Twitter followers and let us know how many are actually organic beings.