Please ensure Javascript is enabled for purposes of website accessibility
Log In Help Join The Motley Fool
Free Article Join Over 1 Million Premium Members And Get More In-Depth Stock Guidance and Research
By Sean Williams - Dec 12, 2014 at 8:03AM

After handily outperforming the S&P 500 this year these three catalysts could have Biogen Idec set up to soar in 2015. 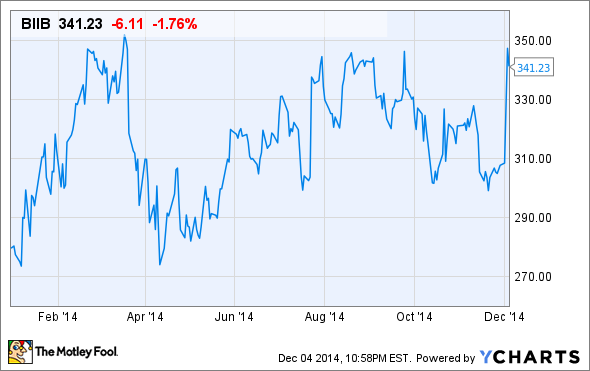 Another year is nearly in the books, and Biogen Idec (BIIB 1.27%) shareholders have plenty to be thankful for as their stock has nearly doubled the performance of the broad-based S&P 500 with a 22% year-to-date return.

It's not hard to see why Biogen Idec is clicking on all cylinders if you take a closer look at its third-quarter earnings report. Revenue for the quarter grew 37% year over year with all of its pharmaceutical products delivering sales increases (with the exception of its hemophilia drugs which debuted this year). Adjusted profit also rose by 62% to $3.80 per share.

But there could be even better news in store for Biogen Idec shareholders as a number of catalysts are waiting in the wings that could send shares soaring in 2015. Let's take a closer look at three catalysts most likely to push Biogen Idec higher in 2015.

No. 1: An Alzheimer's breakthrough
Perhaps the biggest catalyst in the near term for Biogen Idec is its experimental Alzheimer's disease drug BIIB037.

Recently, Biogen Idec reported encouraging results for BIIB037, noting that it improved cognition in Alzheimer's patients exhibiting early stages of the disease. The drug works by reducing the amount of beta amyloid in the brain, the material associated with the plaque buildup that progressively worsens cognition in Alzheimer's patients. The results were so encouraging that Biogen Idec is moving BIIB037 directly from phase 1 studies, which focus almost entirely on safety, to phase 3 trials.

Although we won't have data on that phase 3 trial until 2016, we will get the full release of Biogen Idec's phase 1 data sometime in 2015. Having this full complement of data on the roughly 200 patients in its phase 1 trial could provide quite the spark for Biogen Idec shares since most investors and Wall Street analysts can only guess how "effective" the drug actually was.

Considering Eli Lilly's solanezumab, as well as Pfizer's and Johnson & Johnson's bapineuzumab, failed in their respective late-stage studies in 2012, if Biogen were to succeed with BIIB037 it would be in rarified territory and likely have little pharmaceutical competition. Not to mention, with the Alzheimer's Association forecasting a 176% increase in Alzheimer's cases in those aged 65 and older between now and 2050, it's a patient pool that needs new medicines sooner rather than later.

No. 2: Hemophilia ramp up
The question of whether Biogen Idec would get both its hemophilia A drug (Eloctate) and its rarer hemophilia B drug (Alprolix) approved in 2014 has been answered -- they were both approved. Now the excitement can turn to actual sales of its hemophilia drugs.

What makes this duo so exciting is that hemophilia patients require less frequent injections than under the previous standard of care. In other words, we're not only seeing better efficacy but a nice improvement in patient quality of care.

Initial sales data from Eloctate and Alprolix have been strong with each drug generating $22 million and $25 million in respective sales in the third quarter. Wall Street estimates project the duo to combine for $1 billion or more in peak annual sales, so it'll be imperative that shareholders keep a close eye on the sales ramp up of these drugs in 2015. My suspicion is their launch, just like that of Biogen's other recently launched therapies, will surpass expectations. In October, when Biogen Idec reported its third-quarter results, the company confirmed that a patient taking Tecfidera had died from a rare brain infection known as progressive multifocal leukoencephalopathy, or PML. PML is a disease that's been associated with long-term MS-drug use. As you might imagine, investors panicked and considered that tougher warnings could be applied to Tecfidera's packaging, or that physicians might hold off on prescribing the drug altogether.

However, time has passed and calmer heads are prevailing. Tecfidera has been dosed to more than 100,000 patients and PML has been the cause of death in just one. A single unfortunate death is unlikely to stop Tecfidera's dominance, and I wouldn't be surprised one bit if sales of Tecfidera surpassed Wall Street's estimates in 2015.

Every year I think to myself that there's no way Biogen Idec could possibly top its performance in the prior year -- but it somehow does. The bar is certainly set high in 2015, and Biogen will need to truly excel to push forward. Given the three catalysts above, shareholders could be looking at $400 or more per share by year's end.

The Motley Fool owns shares of, and recommends Johnson & Johnson. Try any of our Foolish newsletter services free for 30 days. We Fools may not all hold the same opinions, but we all believe that considering a diverse range of insights makes us better investors. The Motley Fool has a disclosure policy.