Brent crude oil prices have plummeted roughly 35% over the last six months. No wonder oil related companies like ExxonMobil Corporation (NYSE:XOM) and Chevron Corporation (NYSE:CVX) have seen their shares struggle of late. This, however, is just the type of market in which you want to look at these giants.

Oil on the down low
Oil is suffering through a period of weakening demand and increasing supply, a combination of the U.S. energy renaissance and softening growth in emerging economies like China. It's little wonder, then, that the price of oil is moving lower. In this changing environment, some oil players are simply better positioned than others. 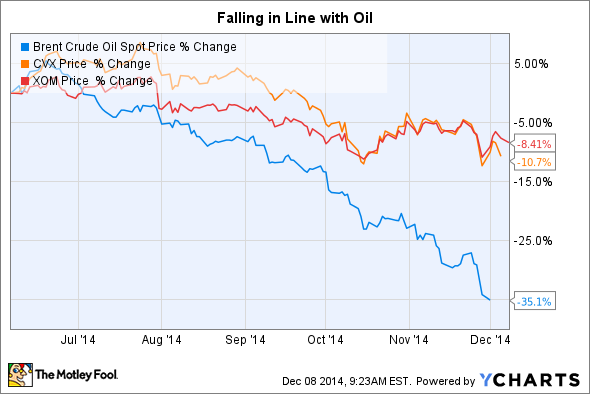 For example, companies focused totally on drilling will watch their top and bottom lines wax and wane with oil prices. Hedging can smooth the ups and downs, but it doesn't eliminate the industry's cyclical nature. This is one big reason why Exxon and Chevron have an edge.

The operations of these two oil majors goes well beyond drilling, to include refining, chemicals, and distribution. In fact, when it comes to refining, lower oil prices can actually lead to higher margins. For example, Exxon's year over year earnings improved in the third quarter despite the oil price drop because of its refining business. Indeed, the nearly $300 million bottom line drop in the drilling business was more than offset by a $430 million improvement in refining. The latter business' margin improved dramatically because the cost of a primary input (oil) dropped. An almost perfect example of the benefit of being an integrated oil company.

Chevron's experience was similar, with drilling activities taking over $440 million off the bottom line year over year in the third quarter. But that was more than made up by a $1 billion bottom line improvement in the refining space. All told, Chevron's year over year results were up, as well, despite falling oil prices.

This isn't to suggest that Chevron and Exxon are immune to oil price volatility. That's not the case, particularly when changes take place as quickly as they have in the last six months. For example, both companies turned in weaker results in the third quarter than they had in the second quarter. And based on the continuing weakness in the oil market, it's likely that the fourth quarter will be another weak one sequentially.

Opportunity if you've got the stomach
But that just means there's no need to rush to buy well diversified oil and gas giants like Exxon and Chevron. That said, although the shares of each are off by only about 10% or so, that's enough to make them interesting right now. For example, income investors might find Chevron's around 4% dividend yield particularly attractive. Exxon's roughly 3% yield is nothing to sneer at, either. In fact, neither has seen yields this high since 2010. Add to this the fact that both companies have long histories of annual dividend increases, and the allure is even greater. 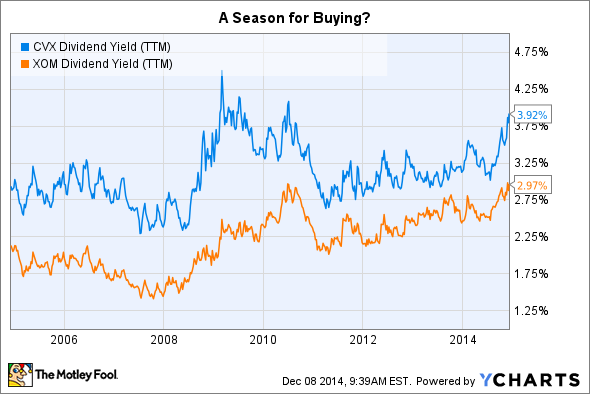 That said, oil production is an issue to watch. Exxon's production has been falling (in other words its business is shrinking). It has been investing to reverse that trend, with management expecting production to turn higher by the end of the year, but third quarter production was slightly lower than second quarter production. So this is a key issue to watch when the fourth quarter report comes out and shouldn't be overshadowed by what will likely be weak sequential earnings results due to falling commodity prices.

Chevron appears to be further along on the investment side. Production across the company was down year over year but up sequentially from the second quarter. That could make Chevron the real bargain here, but keep an eye on the production issue because it's an industrywide problem.

At the end of the day, however, falling oil prices shouldn't lead you to avoid the oil industry altogether. It can actually make the best players more attractive investments. If you can handle the negative oil headlines, Exxon and Chevron could actually be great long-term portfolio additions right now for income focused investors.