ExxonMobil (NYSE:XOM) recently released its updated energy outlook through 2040. That outlook sees global energy demand growing by an average of 1% per year from 2010 to 2014. The fastest growth will come from renewables like solar, wind, and biofuels. However, what might surprise you is that the most important energy source to meet future demand growth, according to Exxon, is actually natural gas. As the following slide shows, natural gas is expected to see the largest absolute growth as it becomes the key fuel in meeting future energy demand. 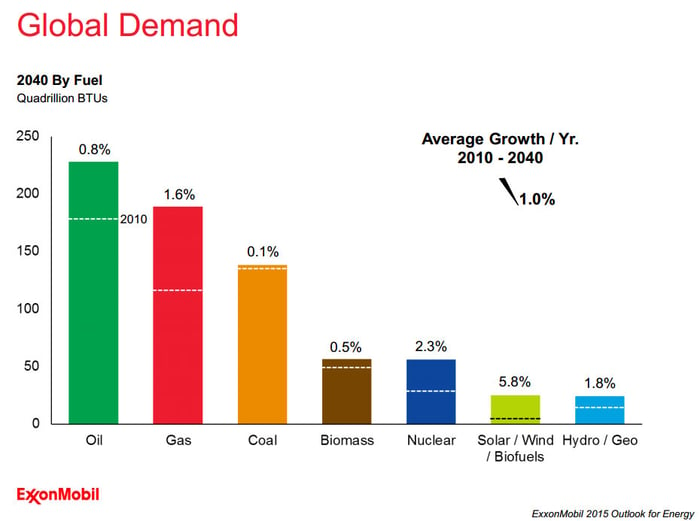 While the outlook still projects oil to remain the overall leader in meeting the world's energy demand, it sees natural gas moving past coal as the world's No. 2 fuel source. More importantly, natural gas is expected to provide more of the energy needed to meet future demand than nearly all other energy sources combined.

Why natural gas?
Natural gas is one of the most flexible fuel sources we have. Not only is it used to heat homes and businesses in the winter, but it is used as an industrial feedstock to make plastics and fertilizers as well as an option as a transportation fuel. On top of that, it is quickly becoming a vital fuel source for electricity generation.

That's really key because, as this next slide shows, electricity generation is expected to lead the growth in energy demand over the next few decades. 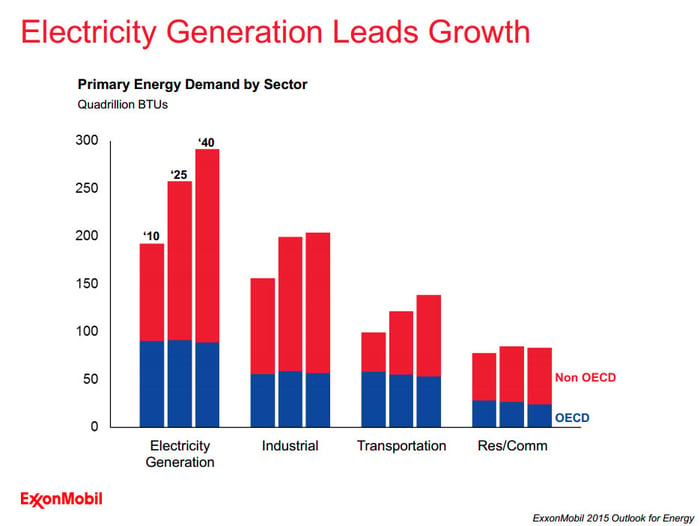 This surge in energy needed for electricity demand is what will drive the growth of renewable and cleaner fuels like solar, wind, nuclear and hydroelectric. This is why most of these fuel sources will enjoy much faster than average growth rates. That being said, the growth of these fuel sources really won't make much of a dent in meeting future demand. Nor will these energy sources be what supplants demand for coal, which is expected to see relatively flat demand over the next few decades. Instead, it's natural gas that will be responsible for supporting most of the energy demand growth as it edges out coal, because when compared to competing fuels, it has more favorable benefits than these competing energy sources.

As we see in the following chart, natural gas used in power generation has the best combination of a low-cost, low-emissions profile and availability to be a key fuel source of the future. 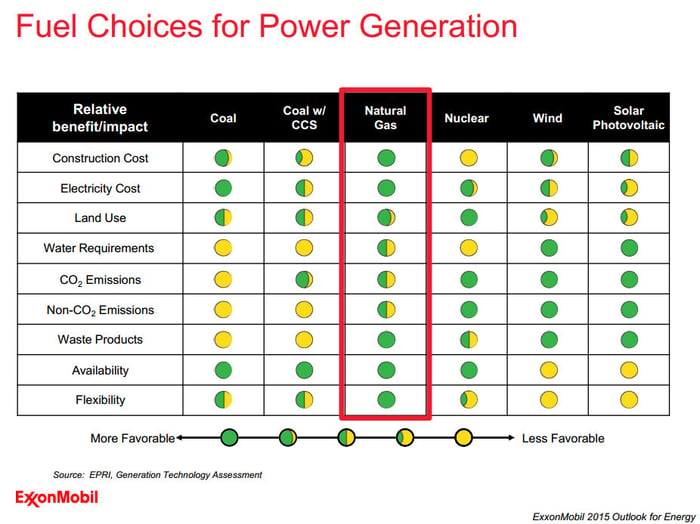 These favorable characteristics are why increased demand for natural gas to be used in electricity generation is expected to be rather widespread around the world. It is expected to deliver most of the new electricity generation in key growth countries like Mexico and Turkey while supplanting coal in more developed nations, as we see in this next chart. 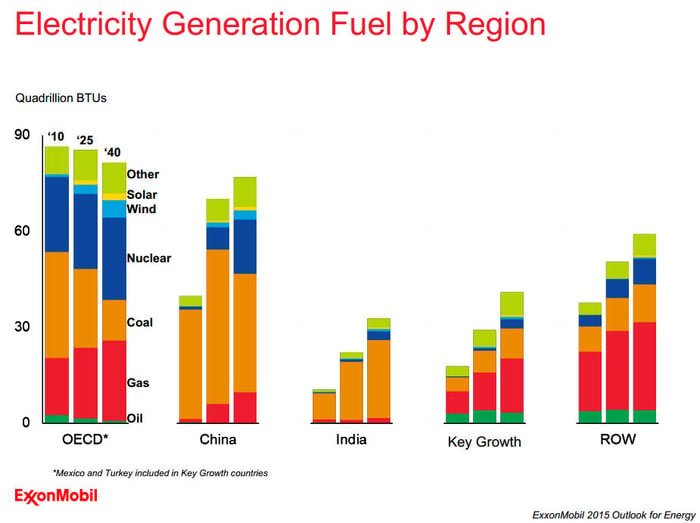 As that slide notes, the only area where gas isn't expected to make any inroads is India, which is expected to remain predominantly coal-powered. Meanwhile, natural gas is expected to struggle to make inroads in China, which is turning more toward nuclear to support future demand growth. That being said, it's pretty clear that natural gas will be the key fuel in powering our world in the decades ahead.

Key takeaway
Wind and solar might be the fastest-growing energy sources, but natural gas is expected to be the most vital energy fuel source to meet demand growth in the years ahead. Not only is it a flexible fuel that can meet needs in transportation, industrial, residential and commercial, but its key benefits make it the fuel of choice for generating electricity. This outlook suggests a bright future for the natural gas industry and key producers like ExxonMobil, as its product is vitally important to meeting the world's need for energy.