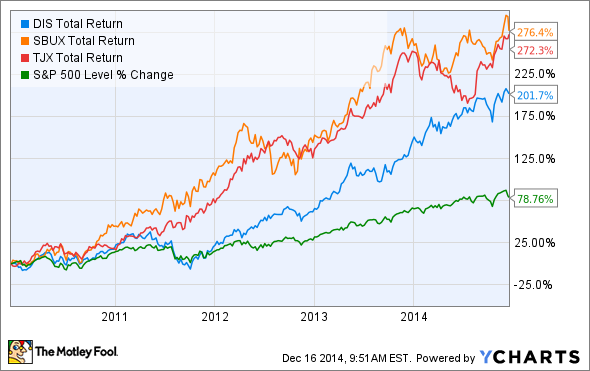 Investing in dividend stocks can be a powerful and effective strategy to obtain superior returns over time. However, there is much more to successful dividend investing that simply going after companies with big yields. Disney (NYSE:DIS), Starbucks (NASDAQ:SBUX), and TJX (NYSE:TJX) show that investing in businesses with increasing dividends and healthy fundamentals can be the key to outperforming the markets in the long term.

The importance of dividend growth

That staggering difference provides solid evidence in favor of dividend investing. However, that's only part of the story: Results tend to be even better when investing in companies with consistent dividend growth. A $10,000 position in companies raising their dividends on an annual basis or starting new dividend payments would have turned into an even larger $559,702 by the end of the period under study.

Dividends don't only provide income to investors, they also say a lot about a company's fundamentals and financial strength. Sustainable dividend growth demonstrates the business is producing increasing sales and expanding cash flow, and this is can be a powerful return driver over time.

In addition to paying attention to dividend growth, it's important to understand the fundamentals and competitive strengths behind those payouts to make sure the business can sustain increasing dividend distributions over time.

Disney
Disney recently announced a 34% dividend increase for 2014. What started as an annual distribution of $0.39 per share in 2009 has grown to $1.15 per share. The House of Mouse has reported record sales and earnings over the last four consecutive years, and management is optimistic regarding growth prospects in the middle term.

Disney owns tremendously valuable competitive assets in its brand and intellectual properties, and the company is proving its ability to translate those strengths into growing dividends for shareholders. The movie pipeline is full of promising launches, including the next Star Wars movie, The Force Awakens, which is scheduled for release in December 2015.

The payout ratio is comfortably low, under 25% of average earnings estimates for the coming year. This means Disney offers substantial room for dividend growth, especially if the company continues leveraging its unique assets to produce rising sales and earnings in the years ahead.

Starbucks
Starbucks is one of the most remarkable growth stories in the consumer sector over the last several years, as the company has built a gigantic global coffee emporium with more than 21,300 stores. Even better, management intends to generate $30 billion in sales by fiscal 2019, almost doubling the $16 billion in revenue produced in fiscal 2014.

Growth plans are clearly ambitious, but Starbucks is benefiting from multiple growth engines and management has proven its ability to capitalize on opportunities in a profitable way. Store base growth, more drink and food offerings, lunch and evening day-part expansion, and mobile payments and delivery are some of the growth venues the company is planning to lever to achieve its targets.

Starbucks started distributing regular dividends in 2010, and the company has raised payments from $0.10 per share quarterly to a much hotter $0.32; this includes a caffeinated dividend hike of 23% for 2014. The payout ratio is also quite safe, in the neighborhood of 40% of earnings forecasts for fiscal 2015.

TJX
Fashion is a fickle and competitive industry, but TJX's smart and differentiated business model has allowed the company to generate consistent financial performance over time. The off-price retailer of apparel and home fashions has delivered growing comparable-store sales over the last 23 consecutive quarters, an impressive track record in such a challenging business.

TJX sources products from more than 16,000 vendors in over 75 countries. The company provides department stores the opportunity to clear excess inventory under favorable conditions; this gives TJX significant bargaining power with suppliers, which it translates into discounts of between 20% and 60% versus traditional retail prices.

These bargains resonate with customers through good and bad economic times, which has allowed TJX to deliver extraordinary dividend growth over the years: the company has grown its dividend an average rate of 23% per year through the last 18 years. The payout ratio is also comfortably low, under 20% of earnings forecasts for the next fiscal year.

When picking the best dividend stocks, investors need to look beyond yields, as companies with rapidly growing payouts and strong fundamentals can be particularly profitable investments. Companies such as Disney, Starbucks, and TJX are well positioned to continue delivering substantial dividend growth over time, which says a lot about the potential returns for these companies' investors over the long term.