It hasn't been a very pleasant few years for the world's leading manufacturer of large construction and heavy mining equipment -- that's a fact. The S&P 500 has outgained Caterpillar (NYSE:CAT) stock by nearly 30% over the last five years, and unfortunately for Caterpillar investors, management doesn't expect its business overseas to rebound in 2015.

With that said, let's take a look at the good, the bad, and the ugly in Caterpillar's retail statistics last month and see where the trends are heading.

The good
I recognize I should probably end this article on a "good" section, but that's just not the story for Caterpillar's sales right now. Just to be clear, these are machine retail statistics for the three-month rolling average ending in November, versus last year. Furthermore, machine retail total breaks down into two segments: resource industries, which is essentially the mining portion of Caterpillar's machine business, and construction industries.

So, the good news? Looking at retail statistics in Caterpillar's construction industries, sales in North America were up 8% at the end of November's three-month period, which was far better than Latin America's 31% slide and Asia-Pacific's 20% decline. When you combine the segments into a machine retail statistics total, it becomes clear where the "good" in Caterpillar's results was. See if you can pick out the regional winner below.

In Caterpillar's third retail segment, energy and transportation retail, the good news was that global sales were still up 11% at the end of November's three-month period, which was far better than respective global declines of 23% and 6% in resource industries and construction industries.

The bad
Of course, there was plenty of bad news in Caterpillar's results, but one thing that caught my eye was the continued downward trend in construction industries' global results. It was a segment that had been helping offset weak resource industries results, but it has slowly trended lower globally. November's three-month result was the worst performance of the year, down 6%. 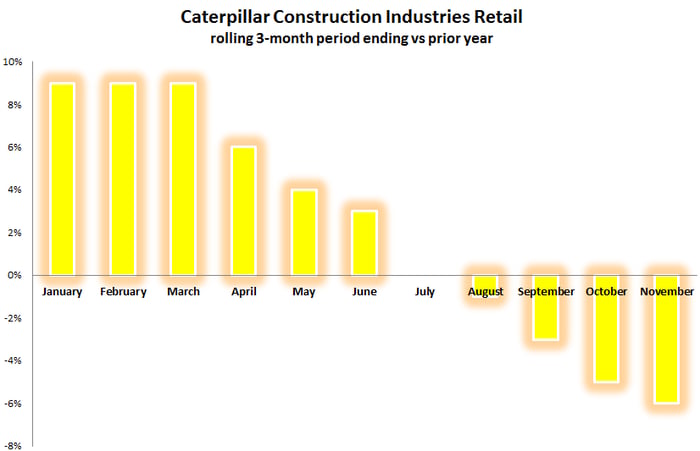 The downward trend in its construction retail sales hasn't been a factor that Caterpillar management has been able to reverse -- at least not yet. You can see a similar decline in the company's construction industries revenue, which is very likely to trend lower in the fourth quarter. 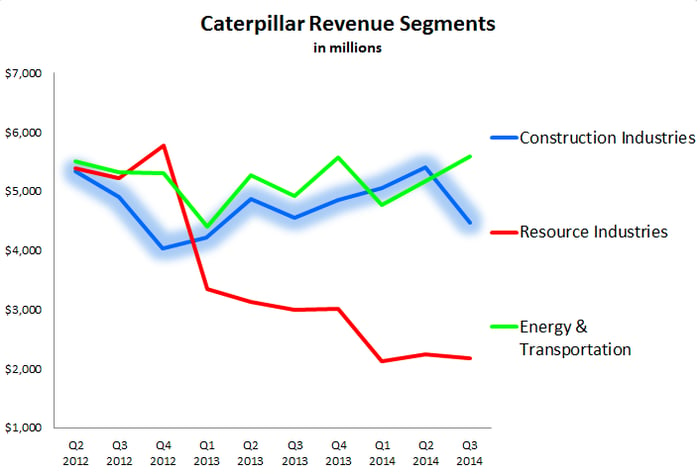 The ugly
Not to beat a dead horse, but if you've read this far, you most likely know where the ugly is: resource industries.

The upshot here is that Caterpillar has focused on cutting costs and improving the performance of its global dealership network that is expected to boost revenues in the years ahead. Despite weak sales outside of North America, and continued weakness in its resource industries business segment, Caterpillar has generated strong cash flow that has enabled management to buy back stock and increase dividends at an impressive rate; through three quarters of 2014, Caterpillar has repurchased $4.2 billion of its stock and raised its quarterly dividend by 17%.

Management expects 2015 to be very similar to this year, so you can expect similar sales performances, but investors must pay attention to the company's ability to further cut costs and continue to generate cash flow. If this reverses, 2015 will be painful.