Please ensure Javascript is enabled for purposes of website accessibility
Log In Help Join The Motley Fool
Free Article Join Over 1 Million Premium Members And Get More In-Depth Stock Guidance and Research
By Chris Neiger - Dec 27, 2014 at 9:00AM

The nation's wireless carriers just paid a pretty penny to the FCC for more wireless spectrum.

Just in time for the holidays, Uncle Sam's wallet is just a tad bit heavier coming off the recent Federal Communications Commission AWS-3 wireless spectrum auction. After more than a month of bidding T-Mobile (TMUS 1.98%), AT&T (T 1.27%), Verizon Communications (VZ 0.83%), and others have paid a total of $44.5 billion for all-important network airwaves. That's much higher than the expected $10.6 billion to $22 billion initially expected.

The AWS-3 bidding is one the largest and most important spectrum sales since the 700 MHz block went up for auction back in 2008 (who could forget!?!).

So, let's take a quick look as to why these carriers went bananas over AWS-3.

Verizon uses some of its current AWS spectrum for its XLTE network. Source: Verizon.

Don't these carriers have enough spectrum already?
No. No they don't. Sure, each one has nationwide 4G LTE coverage, and T-Mobile, AT&T, and Verizon have 300 million LTE points-of-presence (POPs) -- or will next year in the case of T-Mobile -- but reaching that many potential connections is much different than providing each one with stellar coverage.

To continually provide better and faster connections, carriers bid on spectrum to improve their networks. And that's why AWS-3 is so important. It's a mid-band spectrum that has some of the benefits of both low-band and high-band. In short, it can spread out over vast spaces better than high-band spectrum, yet offers lots of capacity in cities similar to how high-band spectrum works.

Where the carriers stand
One of the drawbacks of these auctions is that the bidding is anonymous, and the FCC doesn't allow companies to comment on it until it's closed.

But here's what we do know.

T-Mobile needs a certain block of the AWS spectrum that it currently doesn't have, which spans about one-third of the country. Whether it ended up bidding for this is still unclear. The carrier has a significant amount of 700 MHz spectrum it's currently rolling out, and some analysts think that since T-Mobile only raised $1 billion for the AWS-3 auction, it may have only spent $2 billion in the bidding. In light of how much the auction has brought in, $2 billion doesn't seem like a huge sum. If T-Mobile did in fact hold back on bidding, it also means my previous thoughts on the carrier coming out on top of the AWS-3 auction may not hold up. 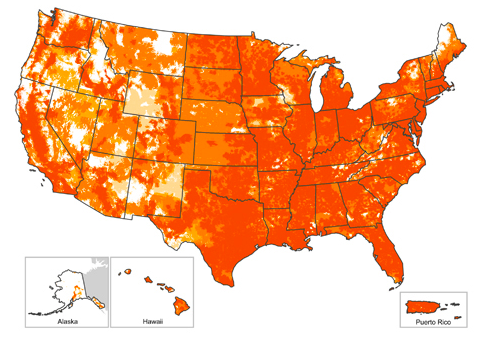 Meanwhile, AT&T and Verizon were probably two of the top bidders. As FierceWireless noted, both carriers need to secure 10x10 MHz blocks "for future spectrum needs." Both companies were looking to expand licenses in major metropolitan areas, and that means opening up their deep pockets. For example, a provisional bid for a spectrum block in New York City and Long Island went for $2.76 billion alone.

And where was Sprint in all this? The carrier is already rolling out its own 2.5 GHz network right now and doesn't really need AWS-3 spectrum, so the company sat this auction out. Next year may shape up to be a bigger bidding year for both T-Mobile and Sprint. The carriers are expected to bid a combined $10 billion in the upcoming 600 MHz auction in 2015 (it never ends!).

Two problems with the current auction
Though the bidding is a big win for the FCC, investors weren't happy with all the spending. Since mid-November, wireless carriers have lost a combined $45 billion in value, according The Wall Street Journal, in part because investors are concerned that using up all of that cash will hurt future earnings.

Truth be told, that's a bit short sighted. Carriers absolutely need to expand their network coverage and capacity on an ongoing basis, and sitting out on a major FCC auction isn't a great long-term strategy.

The real problem for carriers may come once they start deploying the AWS-3 spectrum. Much of the wireless airwaves purchased in this auction will be shared with U.S. government workers, or at least needs to be transferred from them. This is likely to add some deployment delays and, at best, some complications with future roll-outs.

But once the dust finally settles, the AWS-3 auction should result in even stronger AT&T and Verizon networks, and possibly some much-improved coverage for T-Mobile as well. We'll know more in the coming months, but if the $44 billion number is any indication, it appears wireless carriers see a lot of value in using these airwaves to improve their networks. And as we've seen before, a better network can directly translate into a stronger bottom line.

Chris Neiger has no position in any stocks mentioned. The Motley Fool recommends Apple and Verizon Communications. The Motley Fool owns shares of Apple. Try any of our Foolish newsletter services free for 30 days. We Fools may not all hold the same opinions, but we all believe that considering a diverse range of insights makes us better investors. The Motley Fool has a disclosure policy.