The difference between Zulily's potential and its performance is black and white. Its future should be bright if it can get beyond the problems holding back its stock. Image: Zulily.com

So much promise, so many opportunities, and so little to show for it. E-commerce retailer Zulily (NASDAQ: ZU) seems to have squandered most of its potential since going public. After hitting $73 a share soon after its IPO in November 2013, the stock of the mom-focused website has cratered and lost two-thirds of its value.

The problems that caused its latest loss of value may be temporary in nature, so with the stock 66% below its 52-week high, does this represent a good buy-in opportunity for investors?

What's the matter this time?
In the third quarter Zulily had a breakdown in communications, or as the e-tailer called them, "email deliverability challenges." During its conference call last month, management said a number of its subscribers didn't receive its emails for "a period of time" and that deliverability challenges are something it deals with "from time to time." An analyst at ITG Research followed up in December with a research note saying that new customer activations at Zulily had slowed in Q4.

Because it typically takes several months for a new customer to make her first purchase, and the email issue likely slowed the company's customer activations, fourth quarter sales will likely be depressed.

ITG's somber outlook helped caused Zulily's stocks to tumble more than 7% in a day last week, building on the sustained collapse in share price investors have suffered through since February when shares peaked at $73.50 a stub.The 52-week low for the stock was $22.61, according to S&P Capital IQ data. That price was notched last week after the ITG report came out. Because "deliverability challenges" are a recurring problem for the e-commerce site, investors should count on volatility being a hallmark of this stock. 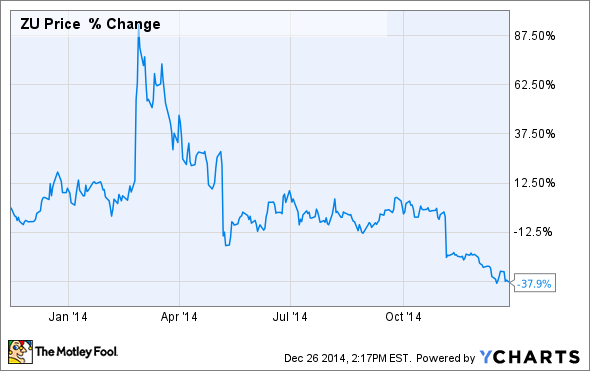 What happened before?
Zulily uses big data to create predictive modeling to determine who will buy what when. While that reliance upon information has led to surging sales -- they were up 72% in the third quarter and are 84% higher over the first nine months of 2014 -- it hasn't helped it to improve delivery times.

Slow shipping is plaguing the e-tailer. According to a Wall Street Journal report, the time it took Zulily to ship a product from its warehouses after receiving an order last year was an average of 11.5 days, much worse than rivals like Rue La La and Gilt, let alone industry leaders such as Amazon.com (NASDAQ:AMZN), which pioneered two-day shipping.

The reason is that Zulily doesn't stock most merchandise, but rather places orders with manufacturers once a sale is completed, which bulk ships it to Zulily's warehouses. According to StellaService data, the situation improves significantly for products Zulily does keep in stock, but fulfillment speed still lags its rivals.

Zulily is also knocked for relatively high shipping fees at a time when free delivery is becoming more popular.

What might the future hold?
Zulily views the email issues as not much of a concern. They happen from time to time, but it works through the problem with its email provider as they arise.

Delivery might be a stickier concern, but management believes its customers aren't necessarily looking for immediate gratification. They come to its site looking for unique daily deals, not quick shipments. And it is opening a new warehouse soon to help relieve pressure, while also investing in automation and a mobile app to help ameliorate the worst of it.

As Zulily is not about to stop operating on an "inventory-lite" model, however, shipping is still going to be a problem.

So is it a buy?
Speedy delivery seems to be the key to retail success these days. Amazon is among the companies experimenting with same-day delivery. Zulily's customers might not be as concerned as Amazon customers in getting their packages as soon as possible, but slow ship times will limit its ability to grow.

With email problems also likely to be recurring and competition only getting more intense (and shipping faster to boot), it seems hard to envision Zulily being a long-term success. I can't see buying in, even at this depressed price.