Looking ahead to a new year often brings on feelings of optimism -- but maybe not for CalAmp (NASDAQ:CAMP) investors. The stock is down more than 36% since the beginning of the year, about 10% of that came after the company posted its 2015 fiscal third quarter earnings just before Christmas.

To find out what's going, it's worth taking a look at the past 12 months to see if investors are battering the stock unjustly, and what 2015 might hold for this Internet of Things company. 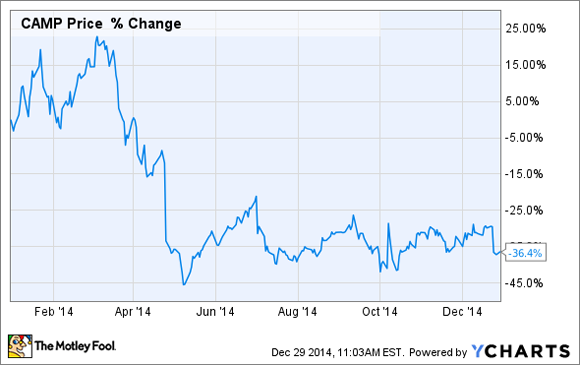 It's been a year to forget for CalAmp investors. Source: YCharts.

Fiscal Q4 2014 results came out in April, with the company posting $59.8 million in revenue and an adjusted $0.20 earnings per share. But analysts were expecting $61.49 million and $0.22 EPS. Despite growing revenue 24% year-over-year investors pummeled the stock.

That may have been a bit hasty. The company's most promising business segment -- wireless datacom -- increased revenue by 32% in the quarter. Calamp continues to move away from its satellite business (which declined 4% in the quarter) to its main wireless datacom business (which makes up 86 % of the business now). But many investors focused on the weaker guidance going into the next quarter and so the stock plummeted.

CalAmp's stock has been up and down since then, but recently the company posted fiscal Q3 2015 earnings, and the stock subsequently dropped 10%. Part of the scare likely came from the 37% drop in revenue from its satellite division.

Aside from the drop in satellite revenue, the company also set fiscal fourth quarter 2015 revenue between $66 million to $70 million, below the $71 million analysts were hoping for . Neither the satellite revenue or future guidance made investors happy.

Looking ahead
On the most recent earnings call, CalAmp CEO, Michael Burdiek, said that, "Specialized telematics device shipments to a key OEM customer in the heavy equipment industry boosted our third quarter results and are expected to be a significant growth catalyst for CalAmp over the next several quarters."

Burdiek's likely referring to Caterpillar here, one of the company's largest customers. He went on to say, "Overall product demand from Caterpillar has exceeded our earlier expectations with revenue in excess of $5 million in the third quarter. The revenue ramp with this customer is expected to continue into the fourth quarter and into fiscal 2016." That's a promising trend for the CalAmp considering the size of Caterpillar and the industrial equipment maker could help push CalAmp's stock in the coming year as revenue from Caterpillar starts to come in.

But because of CalAmp's relatively small size ($634 million market cap ) investors have seen -- and will likely continue to see -- lots of volatility. Investors need to keep an eye on CalAmp's revenue in wireless datacom business over the next few quarters. If this continues to increase, and the company garners more business from additional customers, then 2014 may be just a blip. But if new customers don't materialize and revenues remain stagnant, then this past year may have been CalAmp's writing on the wall.