Please ensure Javascript is enabled for purposes of website accessibility
Log In Help Join The Motley Fool
Free Article Join Over 1 Million Premium Members And Get More In-Depth Stock Guidance and Research
By Matthew DiLallo - Dec 30, 2014 at 10:00AM

After an awful 2014, here’s what the offshore drilling sector might have in store for investors in 2015.

To say 2014 was a bad year for the offshore drilling industry is an understatement. The year started off badly thanks to a significant oversupply issue -- a slew of newbuild drilling rigs hit the market just as oil companies were cutting spending due to surging costs. An oversupply of oil by late summer caused pricing to plunge, which decimated the stock prices of offshore drilling companies and accelerated their decline. 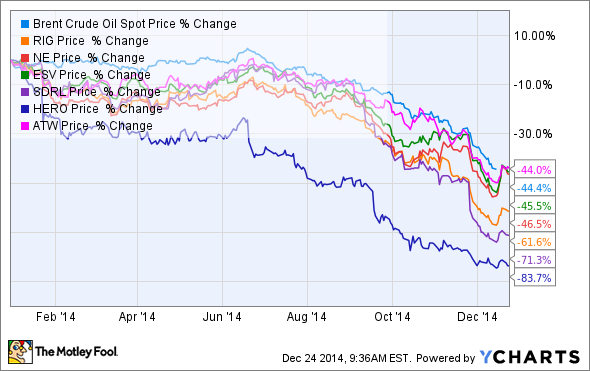 The industry thus enters 2015 with a lot of uncertainty. That being said, there are some things we can expect to see next year if the current market conditions persist.

Expect earnings to fall
Given the weak market conditions we can expect earnings of nearly all offshore drillers to fall in 2015. However, the drop won't be as deep as the falloff in oil prices, as contract backlogs will provide a bottom to earnings.

Most analysts expect offshore drillers' earnings to fall by an average of just 18% next year. Seadrill (SDRL) is actually expected to boost its earnings as 75% of its fleet is under contract for 2015. Meanwhile, Atwood Oceanics' (ATW) strong contract backlog will enable its contracted after-tax cash flow to stay relatively stable for the next two years: 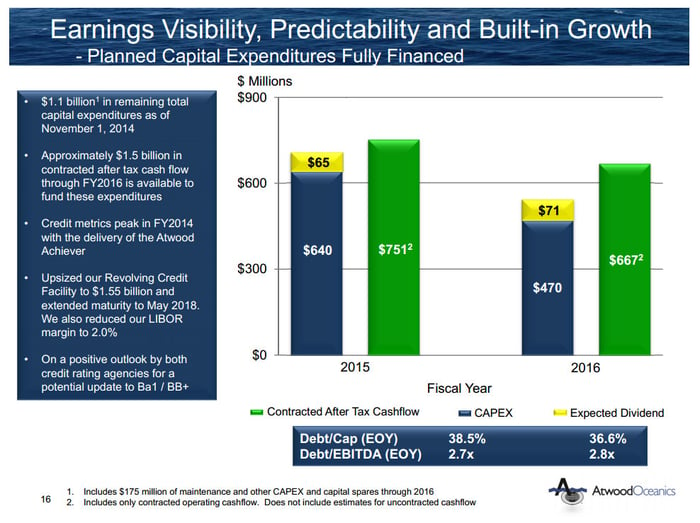 Expect lots of cuts
Nonetheless, headline earnings at drillers could suggest an even deeper drop as drillers write down the value of older rigs. We've already seen this at Transocean (RIG 1.12%), which permanently retired or scrapped another seven rigs this year; the company took a $2.76 billion impairment charge in the third quarter of 2014 and is expected to take another charge of at least a $100 million in the fourth quarter. Meanwhile, Hercules Offshore (HERO.DL) lost money in the third quarter as it idled rigs and laid off employees. These maneuvers typically result in large one-time costs or noncash charges that take a big chunk out of earnings.

Most drilling companies that have rigs without a contract today are idling or "cold stacking" these rigs. It costs upward of $12,000 per day for an idle rig to sit in a harbor. But as many as 140 rigs are heading toward retirement over the next few years as the industry makes way for the newbuilds scheduled for delivery by the end of the decade. The industry today has 360 rigs that are more than 30 years old that need to be retired at some point in the future. 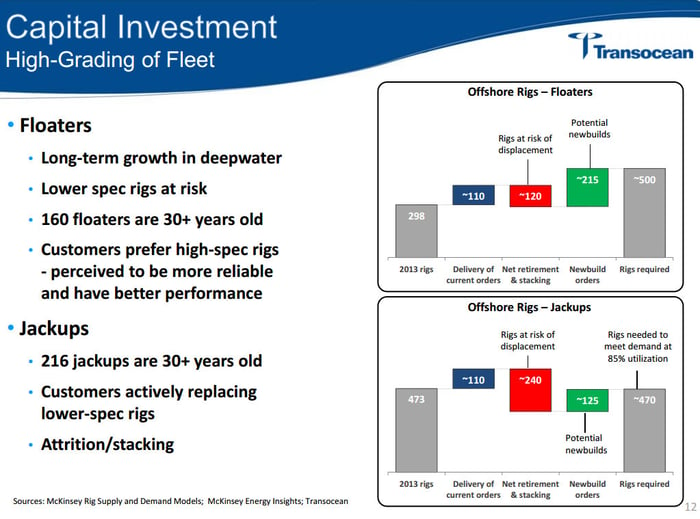 To meet projected demand, the industry still needs 150 more newbuilds than are on order. This suggests the potential for a shortage of rigs at some point, as contract drillers are now delaying new orders until the storm in the sector passes.

The wild card
The offshore drilling industry is entering 2015 under the assumption that oil prices will stay depressed for at least the next year. This assessment is forcing oil companies to cut drilling and exploration budgets until the oversupply of oil is taken out of the market.

Oil prices are a real wild card for 2015. If prices stay in the current range for the next year we'll likely see even deeper cuts to drilling budgets, which will impact contract awards and dayrates for both rigs coming off of contract and for newbuilds hitting the open seas for the first time. However, if oil prices head higher due to an improved demand outlook or a big production cut from OPEC, then it's quite possible contract awards will come in stronger than anticipated. That being said, the unexpected and dramatic fall in oil prices will likely force the industry to be more cautious on spending, especially for expensive offshore drilling projects, which could keep a lid on dayrates and rig contracts.

Investor takeaway
Given where oil prices are now, 2015 doesn't look to be a good year for offshore drilling stocks. We'll likely see drillers continue to idle rigs that aren't under contract while retiring the oldest rigs to reduce supply in the market. This outlook isn't likely to change unless oil prices climb higher and oil companies can bid up dayrates once again.