The crash in oil prices thus far hasn't effected Kinder Morgan. However, if oil stays cheap there are two major risk factors that could cause shares to plunge.

Kinder Morgan (KMI 0.54%) has thus far stood up well to the recent oil price crash. That's understandable since investors are confident in the safety of the company's dividend growth prospects. 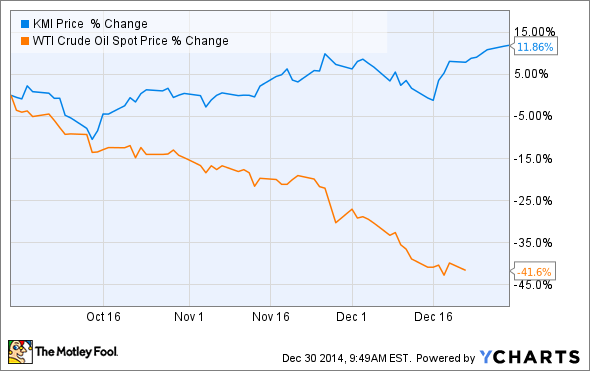 However, there are two major risk factors that, when combined with the prospects of oil prices remaining very weak throughout 2015, could not only threaten the dividend's growth prospects, but even the safety of the current payout.

Dividend risk from low oil is very real
As I recently explained, Kinder Morgan's dividend is relatively insulated from the worst oil crash since the financial crisis. As this pie chart shows, only 20% of Kinder's 2014 consolidated earnings before depreciation and amortization comes from oil, and only 14% is directly tied to the company's 57,000 barrels/day of oil production in the Permian basin. 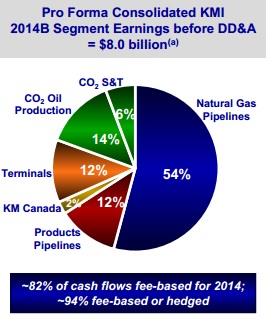 However, as management noted recently, each dollar per barrel that West Texas Intermediate (the American oil standard) drops below $96.15 diminishes the company's distributable cash flow, or DCF, for the year by $7 million. This means that at today's WTI price of $53.9 Kinder Morgan's DCF will take a $296 million hit in 2015.

Management isn't overly concerned at present since it has believes it can sustain the current dividend for 2015 as long as the average oil price for 2015 is $55/barrel or higher. This is thanks in part to the $400 million in excess DCF the company has available to protect the dividend and the $7.7 billion in DCF the company expects to generate in 2015.

Of course if the price of oil were to decrease even further and remain below that key $55/barrel level, then not only would Kinder's previous guidance of 10% dividend growth through 2020 be threatened, but even the current dividend might be in jeopardy. In addition, the company's massive $35 billion current and potential backlog of growth projects could also be at risk.

Growth projects face cancellation
If oil prices crash further or remain at current levels for the next year or two some of Kinder Morgan's largest projects face the prospect of becoming uneconomical. Specifically, I'm referring to its contentious TransMountain Pipeline expansion, which currently transports 300,000 barrels per day of Alberta oil sand crude to export terminals in Vancouver. The $5.4 billion project would triple this capacity to 890,000 barrels per day and expand the storage and export capacity of the marine terminal.

Prior to the oil price collapse Kinder Morgan was already facing delays and legal challenges over the project. Now it potentially faces the possibility of cancellation despite having previously secured commitments for 700,000 barrels of transportation capacity from many of Canada's largest oil sand producers.This is for the same reason that TransCanada's (TRP 0.91%) Keystone XL pipeline may not make economic sense and may never be built even if it clears the last of its political hurdles.

The very oil  the Keystone and TransMountain pipelines were meant to transport--Western Canadian Select (oil sand) crude, which Reuters estimates has a break even production cost of $89/barrel to $96/barrel-- is now too costly for market prices to support as the below chart makes clear. 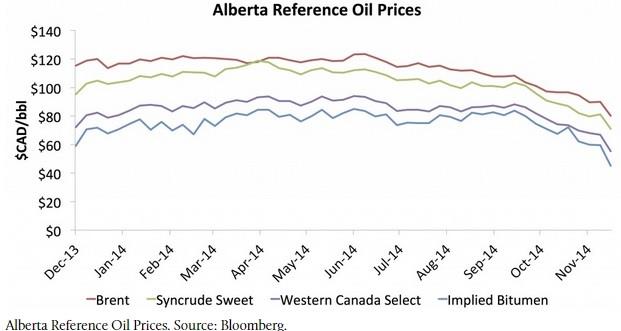 In addition, other oil-related projects Kinder has planned, such as its $1 billion Lobos CO2 pipeline, which was meant to support enhanced oil recovery production in the Permian basin beginning in the third quarter of 2016, now may find itself with a lack of customers.

Already competitors have announced cancelled projects. For example, Enterprise Products Partners (EPD 1.16%) recently announced the cancellation of a 1,200 mile 30-inch pipeline that would have transported 340,000-700,000 barrels per day of Bakken crude from North Dakota to the oil terminal in Cushing, Oklahoma. The reason for the cancellation? Thanks to the plunge in oil prices potential shippers were unwilling to commit to long-term oil transport contracts. Without such commitments Enterprise wasn't willing to commit the capital to building a pipeline that may go unused should oil remain depressed for a prolonged period of time.

Thus, while 94% of Kinder Morgan's 2014 cash flows are either protected by hedging or long-term fixed-fee contracts, the company's ability to grow its cash flows and thus its dividend at the previously targeted 10% rate may very well be threatened by prolonged, depressed oil prices that could shrink its backlog of growth projects.

How likely is sub $55 oil throughout 2015?
While I don't expect oil prices to remain at or below their current rates throughout 2015, the risk of such an occurrence isn't zero. The IMF has recently decreased its projected 2014 and 2015 global economic growth forecasts by 11% and 5%, respectively. Slower economic growth, specifically in Europe, China, Japan, and Russia, is why the International Energy Agency, or IEA, has cut its oil demand growth projection by 21% in its most recent report. In addition, the IEA projects non-OPEC oil production to still increase by 1.3 million barrels/day next year due to oil projects coming online that have already been paid for.

This increases the risk of an ongoing glut of oil keeping crude prices low much longer than previously expected. This is especially true given OPEC's recent aggressive stance against cutting production as it battles for market share with US shale oil producers. For example, on Nov. 22, Ali al-Naimi, Saudi Arabia's Oil Minister told the Middle East Economic Survey that OPEC will not cut production anytime soon, no matter how low oil drops. "Whether it goes down to $20, $40, $50, $60, it is irrelevant."

Bottom line: Even the mighty Kinder Morgan isn't immune to the potential oilpocalypse
Don't get me wrong, I'm not trying to scare any current or potential investors out of investing into what is one of America's best energy dividend growth stocks. However, I feel it's important for investors to be aware of the risks that a prolonged period of very low oil prices could pose to the company. Specifically, the risks of project cancellations and dividend cuts, while not currently large, are real and should be kept in mind when making allocation decisions regarding your diversified income portfolio.