Please ensure Javascript is enabled for purposes of website accessibility
Log In Help Join The Motley Fool
Free Article Join Over 1 Million Premium Members And Get More In-Depth Stock Guidance and Research
By Rich Duprey - Jan 6, 2015 at 8:04AM

This restaurant has begun to reimagine itself to compete with the rise of fast-casual dining.

Italian restaurants may still be a popular dining choice, but with consumers searching out fast-casual chains offering fresh ingredients and healthier options, pasta-laden menus are coming under pressure.

For one, Darden Restaurants (DRI -0.30%), which is staking a large part of its revival on the troubled Olive Garden chain, is still encountering headwinds despite running all-you-can-eat promotions and unveiling a 14-point plan for changing the restaurant's direction. Fiscal year 2015 second quarter earnings showed that although same restaurant sales were up each month of the quarter, traffic was still negative overall. 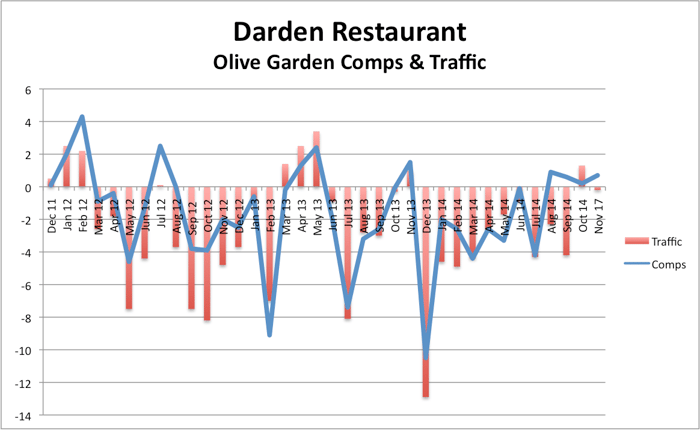 Olive Garden has not been the only victim, however. Brinker International's (EAT -0.03%) top-rated Italian eatery Maggiano's Little Italy only managed to eke out a 0.6% increase in third quarter comps on a 0.9% rise in traffic while comparable sales at Carrabba's Italian Grill fell 1.2% for Bloomin' Brands (BLMN -0.13%) in third quarter.

But the news was even worse for Ignite Restaurant Group's (IGR) Romano's Macaroni Grill where third quarter comps tumbled 8.5% as guest counts plunged 13%. It admitted during the earnings conference call that even four weeks into the fourth period same restaurant sales were still running negative in the low single digits, though it viewed that as an improvement.

Switching things up
As a result, Ignite Restaurant Group is resorting to several Hail Mary plays to keep Romano's Macaroni Grill in the game.

First, it's closing restaurants left and right. A year ago it had 182 Romano's open but reduced that to 162 by the third quarter, and it shut all five restaurants in Missouri before the year ended. (A number of the restaurants Ignite closed last year are being converted to its one growing concept, Brick House Tavern + Taps, which enjoyed a 7.5% rise in comps.)

Next, it's testing out the rather novel idea of opening a restaurant inside its restaurants. No, this isn't a facetious report by The Onion, but rather Ignite Restaurant Group's attempt to attract customers looking for quick, convenient, and cheap lunchtime service.

Romano's Macaroni Grill already has counters and a display kitchen in three quarters of its restaurants, so management thinks it can leverage that space by using them for lunch. It's essentially shoehorning a fast-casual concept inside a casual dining restaurant.

Calling it Romano's Kitchen Counter, Ignite Restaurant Group is testing it in 130 or so restaurants to prove its popularity before expanding the concept to dinner as well. According to early reports, lunchtime traffic is seeing a "substantial" increase.

What's causing this industry shake-up?
In short, casual dining is dying fast. Fast-casual restaurants comprise just 14% of the total $223 billion limited-service dining segment, but growth is outpacing both the quick-serve and full-service segments. Chipotle Mexican Grill (CMG -0.13%) has upset the natural order of things, and restaurants everywhere are grasping at whatever straws are available to change the dynamic.

Wendy's is remodeling all of its restaurants to give them more of an upscale, fast-casual atmosphere, Yum! Brands Pizza Hut is introducing a mind-boggling array of pizza options with fresh ingredients, and even down market McDonald's is adding make-your-own-burger kiosks with an expanded menu of fresher ingredients.

A spaghetti western
As for the future of Romano's Macaroni Grille, Ignite Restaurant Group still has to fight against the trend toward healthy food options and it admits, at least in these early stages, Romano's Kitchen Counter won't do much for its earnings one way or the other, though being expandable is a concept that could help down the road.

With shares having shed nearly half their value over the last six months, investors may still want to use caution before saying mangia! to its stock.